The Widows & Abandoned Women Fund at Work in Myanmar 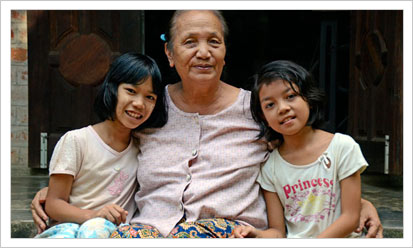 Tial Phawng and her husband, U Sang Hleih, both loved the Lord. U Sang was raised in a Christian family, and he committed himself to the Lord in his youth. Tial gave her heart to Jesus in 1971. Together, they had three children whom they raised in their little home on the outskirts of Yangon, Myanmar.

In 1982, tragedy struck when U Sang suffered an accident at work that paralyzed him below his waist. Doing her best to compensate for their loss of income, Tial worked at spinning thread, but they barely survived during the next few years as they watched their children grow. As time passed, Tial and her husband depended more heavily upon their children to meet their basic needs.

U Sang then passed away in 2008, and Tial moved in with her daughter, Fariang. Although Fariang could provide a simple roof over her mother’s head, that was about it.

Tial again returned to spinning thread to try to earn a little income, but her 75-year-old hands lacked their former dexterity.

But then something wonderful happened.

Peter Cung, a national missionary and micro-banker supported by Heaven’s Family, learned of Tial’s situation. He told her that, because of gifts to Heaven’s Family’s Widows & Abandoned Women Fund, he might be able to provide her with an Opportunity Loan to start a small cottage business so that she could provide for her needs.

After coaching Tial in small-business basics and helping her draw up a business plan, Peter loaned her $90, enough money to purchase two piglets. Tial would feed and fatten them to later sell for a profit. 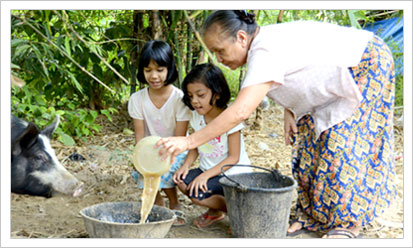 One of the reasons Tial chose to raise pigs is because the work is not difficult for an elderly woman. And in Tial’s case, she would have additional help from two of her five grandchildren—Grace Dawt Hning Sung, age 9, and Priscilla Aye Makyaw, an orphan who, now 11, was adopted into Tial’s daughter’s family when she was 3 years old. “Pi Pi” (pronounced pee pee) is a common term for grandmother in the Chin language, and the two grandchildren are always eager to help take care of “Pi Pi’s pigs”!

Although Tial’s business is on track to succeed—she has sold two pigs so far and paid off over half her loan—she met with a setback a few months ago when one of her pigs died from a strain of swine flu that swept through her area. Tial seems undeterred, however, by the loss, putting her trust in her God who cares for widows.

Christian widows in poor countries often face daunting challenges. Not only must they (without government help) meet their own needs and those of their children, but many face discrimination or outright persecution because of their faith in Christ. While Heaven’s Family still uses gifts to the Widows & Abandoned Women Fund to provide life-sustaining grants to particularly desperate widows, we’ve found that we can do much more good by helping them help themselves through small-business Opportunity Loans. Thank you for your help that makes this possible—and for restoring the hope of many widows who are members of our spiritual family.