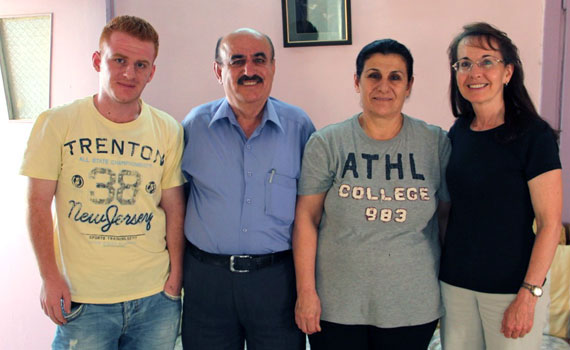 No more blurry faces for (from left) Yousef, Esho and Mariam

Standing with our persecuted Iraqi brothers and sisters

Before the fall of Saddam Hussein in 2003, Christians in Iraq lived in relative peace and safety. Although they still experienced distrust, tension and disrespect from many of their Muslim neighbors, the government kept acts of aggression in check.

When Saddam left, persecution came. Muslims grew increasingly bold, threatening the lives, churches and businesses of Christians, who then began fleeing their homes to other cities, or to other countries.

During my trip last month to the Middle East, I spent 3 days in Amman, Jordan, where I spoke with many Iraqi Christian families who were helped by Heaven’s Family. As I sat listening to each family’s testimony, I heard a recurring detail—they want their stories told.

One of those families was that of “Amir,” whom I told you about last month. Thinking I should protect their Identity, I called him “Amir.” But “Amir” surprised me later by telling me they are not afraid of revealing themselves—on the contrary, they want everyone to know! So now I can tell you his name is Esho, his wife is Mariam, and Yousef is their son. (Incidentally, the English translation of their names are, Jesus, Mary and Joseph, respectively!)

Esho knows with certainty that Jesus has protected them all along the way—from Baghdad to Mosul, Iraq, to escape the violence against Christians in Baghdad, then from Mosul to Jordan once ISIS took over that city.

They have lived in a cramped Jordanian apartment now for over a year, trying to wait patiently for the UN process that will eventually allow them to leave their current refugee limbo status and immigrate to a permanent home in another country. They’ve faced delay after delay, and to make matters worse, they are not allowed to work to support themselves while they wait.

They expressed to me their gratitude for all the help we’ve given them so far through gifts to the Refugee Ministry. Their sentiments were repeated by each of the Iraqi Christians I met.

Thank you for your compassion towards these precious brothers and sisters. Truly, as we minister to them, we are ministering to Jesus (see Matthew 25).

“It is Eternity that Matters!”
Refugee for Life