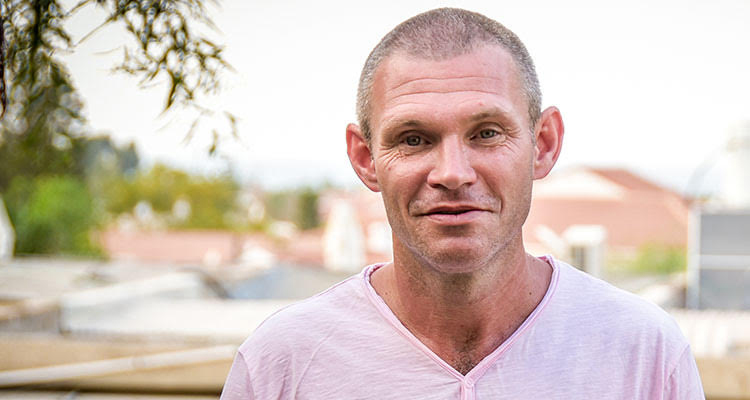 After running from God and country, a man finds home

You may recall that Carole and I went to Israel last September. (If you didn’t get the chance, read my first trip blog here, and my second here.) I love what my partner, Dov Bikas, is doing among the addicts and homeless, and the Prison & Rehab Ministry is supporting his work there as God provides. I thought you’d appreciate another testimony from the land of our spiritual forefathers.

I fondly remember Andrei Tragov, pictured above, who first immigrated to Israel from Russia in 1998. He’d come to get settled, then return to bring his pregnant girlfriend. He knew staying in Russia would mean difficulty for him—a stint in the army turned him into a hard drinking renegade—so he wanted a fresh start. His mother was Jewish, so following the flood of other Russian Jews to Israel held promise.

The couple married in 2001, but their relationship began to fray, and they split in 2004. That same year she was killed in an accident in Russia, and Andrei turned to heroin to escape his pain. His family then abandoned him, and at 30 years of age began living under a bridge in Tel Aviv. Over the next several years he would struggle to get clean, find work, then fall into drugs and hopelessness once again, repeating that pattern many times. At his lowest he’d gone without bathing for three months.

Life on the streets of Tel Aviv, Israel: at left, a homeless man who seemed mentally ill and/or demonically controlled; at center, another homeless man finds his next meal in a dumpster as Andrei once did; at right, two addicts shooting up in a parking lot in the middle of the afternoon (the man at left is using a van’s mirror to inject directly into veins in his neck)

One day he was walking past a street corner where he noticed a couple of men witnessing to a homeless man. Andrei had forsaken any faith in God, but as he walked by, one of the men, wearing sunglasses, seemed to look right at him and quote a verse from the Bible. Andrei was shook up by the encounter, but kept walking. That moment proved to be a providential turn in Andrei’s life, creating a fissure in his hard heart into which the Holy Spirit could begin to pour His love. (Amazingly, Andrei told me that he discovered later that the man who spoke to him that day was blind, and had not actually been looking at Andrei when he spoke God’s Word. The man’s words had been intended for the homeless man he had been witnessing to!)

Another time Andrei walked into a homeless day shelter for a hot meal. There he met my friend Dov, who oversees the facility. A free meal and caring people drew Andrei back again and again, until he finally met Eduard, the director of one of Dov’s drug rehab centers several miles to the south in Ashkelon. Andrei was on an upward swing in his cycle, so he decided to accept Eduard’s offer to live at his center. Andrei thought he could find work, get his life back together, and move on.

When Andrei entered the facility he was convinced there was no God. But then he began to see strange things happen—he even thought at first that the soup he and the other residents were eating was being laced with something! The Lord continued to draw Andrei and his heart softened. He could no longer deny God’s existence, nor His call upon his life.

Andrei surrounded by Eduard, at left, and Dov on the right (behind them is the biblical city of Ashkelon and the Mediterranean Sea)

During the evening service at the rehab center where I met Andrei, I couldn’t help noticing the joy on this man’s face. Through a remarkable path of circumstances God drew this man to Himself. Andrei’s goal in life is now to serve God and die daily to himself. He continues on at the center, helping to disciple others. “Seek Him first and He will provide,” he told us, paraphrasing Matthew 6:33.

Andrei is just one more of God’s trophies, a person He’s taken from the utter depths of life and raised up to be a new creation in Christ. I’m glad to have met Andrei, and I’m glad that many of you are participants in that work through the Prison & Rehab Ministry. Thank you so much for helping to bring hope to the outcasts in Israel!

Finding Shelter in the Promised Land
Trouble in Paradise