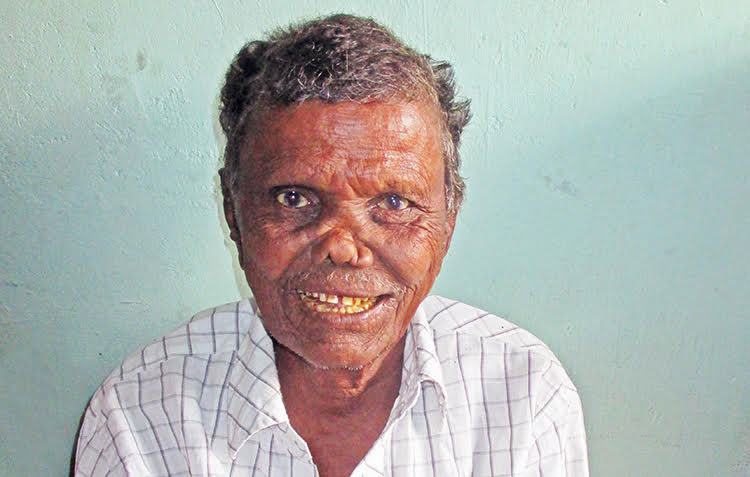 Dear Brother Eliah, now made whole and rejoicing with his Savior for eternity!

Many of you who have followed the Leprosy Ministry over the years will recognize the story of Eliah, a precious saint whose inspiring faith won my heart and caused me to first share his story in December of 2014 (click here to read). He has now gone on to be with the Lord but, if you will allow me, I would like to take this opportunity to give his life a final tribute.

Eliah was unfortunately diagnosed with leprosy before the advent of the multi-drug therapy that now halts the progress of deterioration. Initially, he had no idea what the patches on his body were and tried to treat them with Ayurvedic medicine—an ancient practice in India. But before long the disease manifested more symptoms and Eliah began to lose his fingers and toes. At this point, fear and superstition caused the local villagers to banish him from his community—the only place he had ever called home.

The desolation Eliah must’ve felt as an exiled young man with a marred body and missing appendages is heartbreaking. He was virtually unloved, unwanted, and people would barely even look at him. But amidst that season of isolation, there was One who was waiting in the wings and working behind the scenes on Eliah’s behalf, and before long he heard tell of a colony in Hyderabad where others that looked like him were being treated with medical attention.

Soon after his relocation to Hyderabad, Eliah started attending church and that was when he met God for the very first time! He began a walk of devotion as an adopted son of a loving and caring heavenly Father. Eliah was made new and enjoyed praising and worshipping the Lord, and even proved himself to be a very good singer. He was known for his kindness and joy, and shared a continual desire to lift others up with words of affirmation and encouragement.

One of the members of the congregation where Eliah attended described his impact on her life:

I have asked him, Ttatta (or grandfather) how come you are always smiling and happy? He said, “God is with me and He is always loving and caring and He is showing His love always…” I feel that even though he is having ulcers and wounds, he never showed his pain and always keep smiling…I really feel God’s presence…he is godly man.

Today I asked myself, Would Eliah have met the Lord if he had never contracted leprosy? He most surely would have lived a different life, but I can only be sure of one thing—that God did indeed turn this horrible curse into a blessing for this wonderful man who gave his heart so freely. I consider myself privileged to have made Eliah’s acquaintance, as one of the Lord’s beloved “least of these.” Thank you to all of you who provided comfort to this worthy sojourner.