She’s Not Heavy, She’s My Sister

The Unreached People Groups Fund at Work in China Sister Lu at right, with a friend in Christ

“Can Jesus accept a broken person like me?” It was a sincere question from a woman who’d suffered rejection for 50 years.

As a child, Lu contracted a polio-like disease that significantly impaired her ability to walk. Had she been born in a more developed nation with accessibility laws and mobility devices, life for Lu would still not have been easy. But Lu was born in rural China, into a minority group known as the A-Che who live on top of a remote mountain range. The rugged pathways trodden by the A-Che people aren’t even close to being suitable for wheelchairs.

A-Che culture is agrarian, and one’s worth is based on one’s ability to farm. Of course, Lu’s physical limitations made it impossible for her to work in the steep, terraced fields. Some from her village regarded her as a consumer, rather than a contributor. Lu grew up feeling inferior, rejected, and guilty for eating food for which she did not work. A remote mountain village in China’s Yunnan Province, with terraces in the distance

Lu eventually married a good man, but as an adult and then a mother of two, her condition worsened, and so did her feelings about herself. Day-to-day functions became progressively more difficult. She was rarely included in any village activities, nor did she want to be included, because she always felt like a burden. Life seemed increasingly purposeless and cruel.

Then early last March, Lu heard the gospel for the first time (due in part to Heaven’s Family’s targeting the A-Che people through our Unreached People Groups Fund). Lu was touched when she heard of Jesus’ love, and she asked Paul Fang, a member of the evangelism team, “Can Jesus accept a broken person like me?” Paul’s answer melted her heart: “You are just the kind of person that Jesus is looking for.”

Paul invited Lu to a small gathering of believers that would be meeting that night. She accepted his invitation, and he later returned to her house to pick her up, literally. Paul lifted Lu onto his back and carried her as he walked the mountain trail to where the believers were gathered.

The small group of Christians whom Lu met that night lifted her spirit with their love and acceptance. They shared the gospel with her. Lu gave her heart to Jesus.

Now, it is obvious that Lu is a new creation in Christ. She can’t seem to stop smiling. 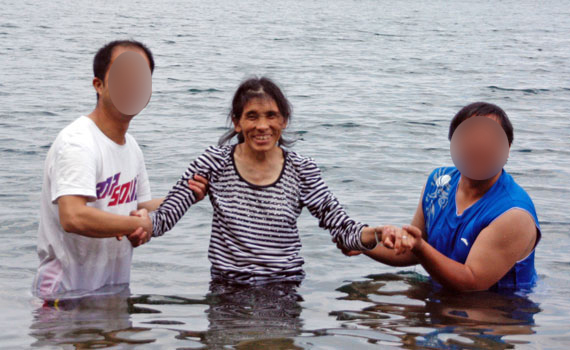 Lu, ready to be baptized

Lu just recently attended her first discipleship training seminar, sponsored by our Unreached People Groups Fund. It was inspiring for me to watch the new believers from her tribe joyfully carry her on their backs everywhere they went…even into the water when she was baptized! They tell her she is no burden…she’s their sister!

Through our Unreached People Groups Fund, Heaven’s Family is actively reaching the until-recently-unreached A-Che people group. In March of this year the number of A-Che believers doubled to 30! Your prayers are still needed to soften other A-Che hearts. And your gifts help us continue to plant seeds of truth into those softening hearts.