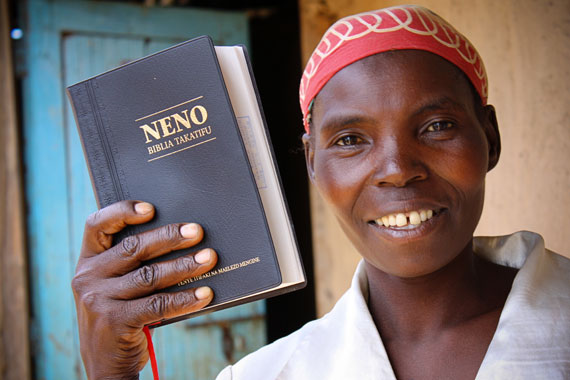 Very blessed to have her own Swahili Study Bible

Owning a Bible is a luxury for Christians in many parts of the world. And in some countries, it’s a crime. But we believe that every Christian should have access to a copy of God’s Word in his or her own language. And for that reason, Heaven’s Family’s Bibles for Believers Fund exists.

2014 saw success. We were able to provide thousands of Bibles for persecuted believers in places like China, North Korea, Iran, Iraq, and Syria.

In China, we supplied an average of 150 Bibles each month to the underground church. Chinese church leaders estimate that 3 Chinese people come to Christ for every Bible distributed.

In Iran, we provided 65 New Testaments each month, plus an additional 2,000 for a summer evangelism project. It is estimated that 15% of Bible recipients in Iran receive Jesus as Lord and Savior within 2 years.

Smuggling Bibles into North Korea continued to pose a challenge last year. With your help, however, each month we funded 5 digital readers and separate USB drives containing the Scriptures. By sending the Bible on tiny memory devices, couriers avoid detection by border guards.

The rising tide of Islamic jihad in the Middle East forced many to flee to refugee camps in 2014, but growing disillusionment with Islam provided great opportunity to reach hungry hearts with the gospel. Because of gifts to the Bibles for Believers Fund, we were able to respond with Bibles in several languages, placed into the hands of refugees.

Finally, we also provided Bibles to complement the evangelistic and disciple-making ministries of Heaven’s Family’s National Missionaries in India, Africa and Mexico.

Thank you to all of you who have helped us spread God’s Word in 2014!