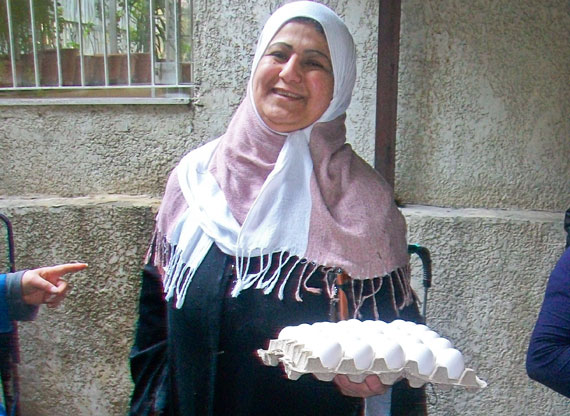 As barbaric jihadists of the Islamic State (IS) advanced towards their village, “Fatima” and her family left their home and possessions behind, fleeing for their lives to a safer city in Syria. There Fatima heard of a Christian church that was providing food parcels for refugees—regardless of their religious affiliation. She visited to request food, and Fatima experienced the sincere love of Christian believers for the first time in her life.

So she decided to visit one of their church services. The pastor explained to her that she wasn’t required to attend his church in order to continue receiving food. He knew that Fatima, a Muslim, might face repercussions for attending his church. But she insisted, saying she didn’t care about the consequences, because it is only at church where she experiences peace.

Fatima is not the only Muslim who regularly attends that same church in Syria. There are unheard-of numbers of Muslim refugees whose hearts are opening in Syria, Iraq, Lebanon and Jordan because of their suffering, disillusionment with Islam, and the love of Christ’s followers.

In 2014, Heaven’s Family invested over $20,000 meeting pressing needs for Syrian refugees through the church that Fatima attends. In total, we’ve invested more than $100,000 to touch the lives of hundreds of people who have been forced to flee from their homes, villages and towns in Syria, Iraq, Sudan and DR Congo. We’ve not only provided food, but clothing, medicines, hygienic supplies, blankets and heaters. We’ve funded skills-training to promote self-sufficiency. Most importantly, Heaven’s Family’s Christian Refugees Fund has provided Bibles and Christian literature.

Thank you for helping us bring hope, as well as the love and light of Jesus, to many who have been living in darkness—and for being an answer to the prayers of many in our own spiritual family.