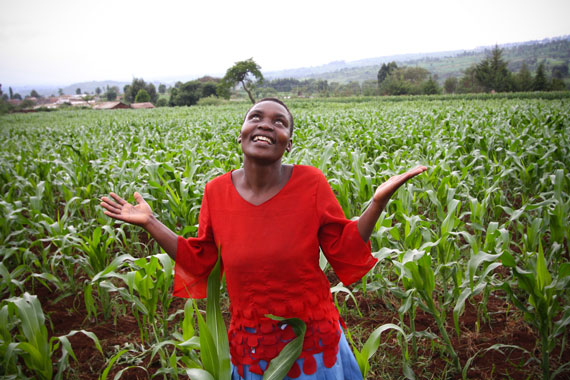 The term “bumper crop” isn’t often used in the same sentence as the word “Africa.” But that’s changing since the introduction of Farming God’s Way (FGW). We’re seeing ever-increasing harvests of crops and souls.

I visited Malawi in April of 2014 to observe the maize harvest of 30 subsistence farmers who, for the first time of their lives, had applied principles we taught them from FGW. Previously, none of those farmers had succeeded in growing enough maize to feed their families all the way to the next year’s harvest. They’ve always known what everyone calls “the hunger season.”

Much to everyone’s delight, this time, all 30 farmers enjoyed record harvests. All but one (who had a small field and a large family) harvested enough maize to supply their family’s needs even beyond the next harvest. Those 30 families celebrated with singing and dancing, thanking God that their perennial enemy—hunger—had been banished!

News of the amazing harvest has spread. During October’s planting in that same village in Malawi, 70 new farmers joined the original 30 to apply FGW practices. I can’t wait for harvest time in 2015!

In 2014, we also introduced FGW in Uganda, Kenya and Zimbabwe, and the results have been equally encouraging.

Even more exciting are what we refer to as God’s Love Groups—weekly meetings at which FGW farmers are not only taught life-changing agricultural principles, but also Bible truths. God’s Love Groups have become vital fellowships where members care for one another, and where evangelism and genuine disciple-making are taking place.

It is harvest time! In 2015, I expect a 5-to-10-fold increase in the number of participating FGW farmers, as well as an ever-increasing “harvest of righteousness” through our God’s Love Groups. It’s going to be a bumper year!