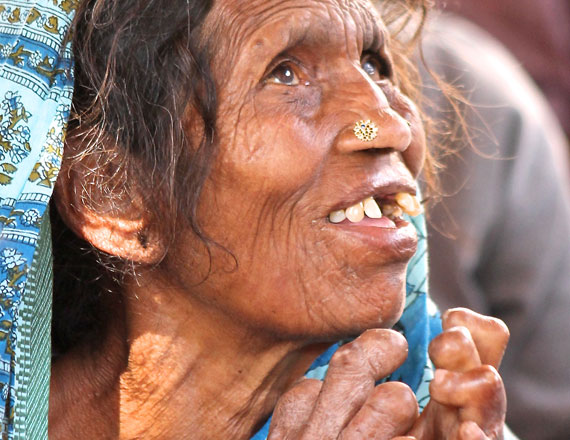 The radiant joy of this Indian leprosy patient, assisted through our Leprosy Ministry Fund, seems remarkable in light of leprosy’s toll on her body

Although modern leprosy (Hansen’s Disease) is easily cured and rendered noncontagious, it continues to plague the poor in some developing nations. Victims are stigmatized and ostracized. Just like in Bible days, to survive, they must beg.

Jesus cared for leprosy victims, and because of His love within us, so do we, in both China and India. Through our Leprosy Ministry Fund, we not only relieve hunger, dress wounds, and provide shelter for leprosy victims, but we also work to restore their dignity through education, vocational training, and self-sustaining businesses funded by grants and micro-loans.

In 2014, Heaven’s Family’s Leprosy Ministry Fund invested $7,700 to provide food, $18,113 for medical care, $6,000 for ministry transportation needs, and $18,113 for shelter and living improvements. As part of our vocational training strategy, we provided $3,757 for sewing centers that train young women so that they can help support leprosy-afflicted parents. We also facilitated various forms of farming, including the raising of livestock and fish.

Last year we also continued to provide tuition for children from families with leprosy so that they could attend school in Hyderabad, India, giving those stigmatized families hope for their futures. Through sponsorships, we provided $11,710 in 2014.

Although we cannot reverse the untreated physical consequences of leprosy, we feel extremely blessed to be speaking God’s “I love you” message to them, and we’re grateful for those who joined their voices with ours through their generous contributions to the Leprosy Ministry Fund in 2014. Thank you!