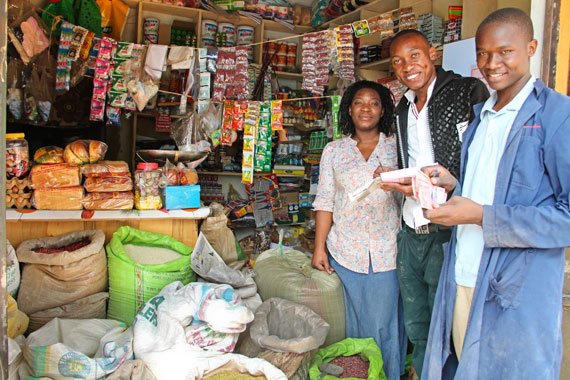 Kevin Chaya (middle) with Raymond (right), one of his 3 employees, selling rice, beans and nuts to a happy customer

At our very first meeting, I could tell that 20-year-old Kevin Chaya of Kenya had what it takes to succeed in business. He already ran a dry-goods wholesale/retail business, but he needed capital to expand.

Believing in his plan—and Kevin’s Christian integrity—Heaven’s Family granted him what we call an “Opportunity Loan.”

The results: Within a year, Kevin’s business grew 10-fold and employed 3 other poor Kenyans. Kevin repaid his loan 4 months early!

Because continual handouts can do more harm than good, helping people help themselves is the best form of charity. Robert Lupton, in his book Toxic Charity, says it well:

In 2014, Heaven’s Family’s Micro-Loan Fund helped more impoverished believers help themselves than in any previous year, in part by training and employing new micro-bankers, and also by increasing the capital available to existing micro-bankers with proven track records.

In 2014, we also taught borrowers about responsibility and accountability through various discipleship/business-training programs. As they meet regularly for mentorship and support, God’s Love Groups (GLGs) of 5-6 borrowers continue to play a vital role to that end. In 2014, we also began GLG personal savings accounts.

This year we will continue to walk through the doors God is opening to serve the very poor among our spiritual family by providing opportunities they’ve never had previously. Thank you for joining us on an incredible journey!