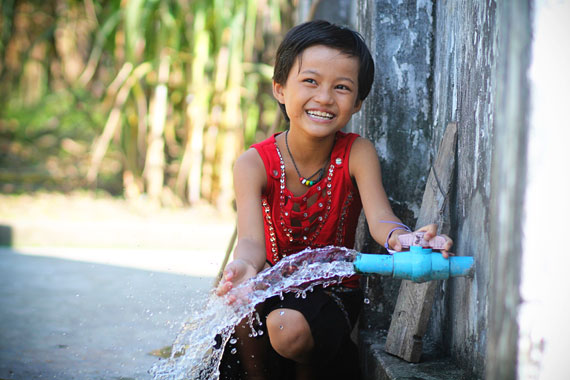 Sarai and her unwed mother, with 3 other siblings in tow, needed a place to hide from domestic violence. They were welcomed with open arms into a little community of believers known as “the Village,” pioneered by Heaven’s Family missionaries to Mexico Jason and Nicole Fitzpatrick.

Sarai’s story is similar to the other 50 children who’ve found refuge there. All have fled the tragic consequences of poverty—abandonment and extreme neglect, often due to drug or alcohol addictions, and various forms of traumatic abuse—to find hope at the Village. Jesus is there, living through the compassion of Nicole and her staff.

Residents of the Village also find clean, abundant water, thanks to a well provided by gifts to Heaven’s Family’s Safe Water Fund.

One billion people in the world today have no access to clean drinking water. Millions of them suffer illnesses because of it—and millions of those die from waterborne diseases.

I’m happy to report that the Safe Water Fund did something in 2014 to change those sad statistics. In addition to a well at the Village, here are additional examples of how we supplied safe water to our impoverished spiritual family around the world:

• We funded the drilling of a combined total of 18 wells in poor villages in Mexico, India, Sri Lanka and Zimbabwe. One of those wells is located at a Christian primary school in Zimbabwe. As a result, abundant safe water is now available to thousands of poor Christians and their neighbors. These wells are providing a strong witness to the love that Jesus has for the “least of these,” as safe water is such an urgent need.

• We installed 11 water storage tanks for poor Christians being ministered to by our partners in war-ravaged and impoverished countries including DR Congo, Sri Lanka, Thailand, Kenya, Zimbabwe, and India. In some cases, those tanks store rain water that falls only during the rainy season. In other cases, tanks store water pumped from wells.

• We distributed more than 300 Sawyer water filters to poor believers among the churches of our partners, who desperately needed safe drinking water. We reached 14 countries, blessing thousands of people with these highly-effective water filters that remove 99.9% of bacteria, cysts, dissolved fecal matter and contaminants.

Heaven’s Family is, of course, interested in an even greater, eternal benefit. Every Safe Water Fund project is unashamedly done in the name of Jesus as a testimony to the love of God, encouraging believers and drawing unbelievers.

In 2015 we’ll continue to bring safe water to more who have none and will work to teach them about safe water practices. We’ll also lead many to Jesus, the well that never runs dry!