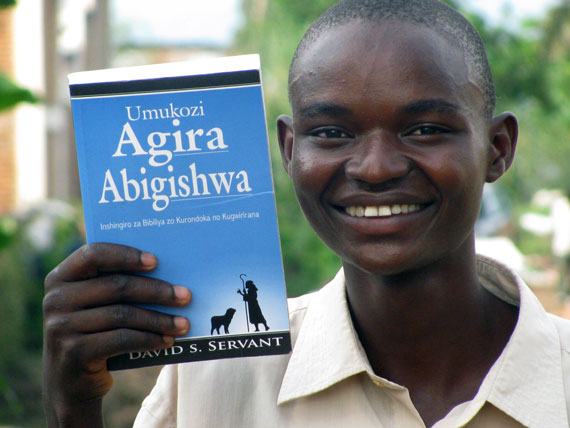 Pastor Etienne in Burundi, Africa, excited to have his own copy of The Disciple-Making Minister in his native Kirundi language

“To be successful in God’s eyes, it is essential that a minister understand the goal that God has set before him. If he doesn’t understand his goal, he has no way of gauging if he has succeeded or failed in reaching it. He may think he has succeeded when he has actually failed. And that is a great tragedy. He is like a first-place runner who jubilantly sprints across the finish line of an 800-meter race, basking in his victory as he raises his hands before the shouting crowds, not realizing that he was actually competing in a 1600-meter race. Misunderstanding his goal has guaranteed his failure. Thinking he has won has assured his loss.”

That’s the first paragraph in David Servant’s book titled The Disciple-Making Minister. God’s call to go and make disciples is the purpose of both the book and the Books for Discipleship Ministry. Christian leaders throughout the world are grateful for the biblical clarity and understanding they find in this book—something most of them say is in short supply in their own language. Its many topics both encourage and assist them as they model and teach their flocks.

Three new translation projects began in 2015, of which one, Cebuano, is just coming to completion. Cebuano is the mother tongue of more than 20 million people in the southern islands of the Philippines. An Amharic translation is under way for the 25 million who speak the official language of Ethiopia, and the 20 million Fulani people scattered across parts of West Africa will soon have TDMM in their own language. Most overseas visits to our Heaven’s Family teaching website, ShepherdServe.org, are to access our online translations of TDMM.

Last year our site received about 210,000 visits from those who speak languages other than English, mostly to read a topic from one of our 32 translations.

The Books for Discipleship Ministry has proven to be a great blessing, helping Christian leaders focus on our Lord’s call to make disciples and giving them confidence as they build God’s kingdom around the globe.

Thank you for joining our Lord’s work through this ministry of Heaven’s Family!