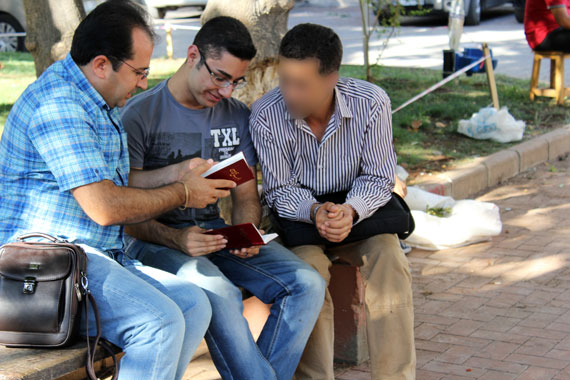 Morad, a Christian, sat waiting in an automobile licensing office. Another waiting man was a Muslim mullah. The wait had been long, and the impatient mullah finally blurted out loudly, “The people working here are in need of God’s forgiveness!” Seizing the opportunity, Morad asked the man about forgiveness. The mullah admitted that Muslims could never be sure their sins have been forgiven. Morad then shared the Bible’s teaching about forgiveness. After his words were dismissed with standard Muslim arguments, Morad wisely replied, “I am not here to argue with you, I just want to share with you the wonderful truth about how Jesus is able to forgive sins.”

Morad then gave a New Testament to the mullah, saying, “Please read it. You can meet Christ and understand what he says about forgiveness.” The mullah respectfully accepted the gift, promising to read it.

That’s just one of the encouraging stories Heaven’s Family received in 2015 because of the work of the Strategic Bibles Ministry (formerly known as the Bibles for Believers Fund). The name change reflects our new focus on very strategic opportunities, such as placing Bibles in the hands of disillusioned Muslim refugees, and taking advantage of modern technology to reach further into restricted countries.

Last year we funded 1,200 Muslim Outreach Bibles—a version that appeals more to Muslims because of its ornate cover and text—for Afghanistan and Pakistan. With the aid of this version, thousands of Muslims have converted to Christianity.

Providing native-language Bibles for new Christian converts required cooperation with embedded Middle-Eastern ministries. We learned that children’s Bibles and storybooks are also effective because children—who are more receptive and literate—then share the Word with their parents.

Sharing God’s words of eternal life with so many hungry souls is exciting, and we are grateful for those who make it all possible!