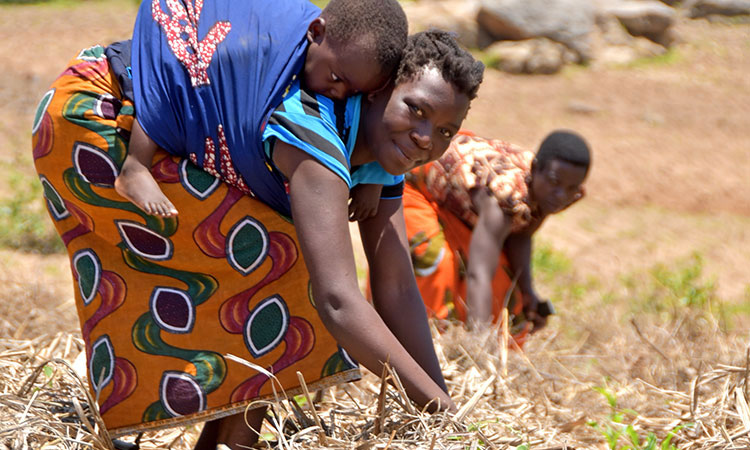 It was “bring your child to work day” (this and every other day) for this mother and child in Malawi, and it was time to spread “God’s blanket” around young maize plants to help prevent the loss of moisture through evaporation, as well as provide additional nutrients to the soil

“Our best trip yet!” Those words poured forth from my heart as I messaged my wife and friends from Africa earlier this month. I know it sounds like exaggeration, but if you’ll read on I think you’ll agree!

We began in Malawi, in southeastern Africa. I was accompanied by fellow Heaven’s Family staff member Jeff Trotter, who tagged along to help me document the amazing story of transformation that Farming God’s Way is bringing to poor rural farmers. Charles Mithowa, a dear friend and faithful FGW partner, greeted us at the airport and took us to his home, where plans were made for the next few days. To my delight, we were also joined by Dickson Shuwali, also from Malawi, and Joseph Maravanyika from neighboring Zimbabwe—two exceptional FGW trainers to help us for the next several days.

At left, this group of Malawians who, although new to FGW and have only seen their maize seedlings beginning to grow, are thanking God simply for the hope of an abundant harvest; at right, each field was prayed over, asking God to reward the work of their hands

December is planting season in Malawi (located south of the equator, their summer is just beginning). The nation has been suffering severe drought and famine, so most farmers are eager to try anything that will help them produce a harvest sufficient to feed their families throughout the year. Dickson and Charles have been busy training FGW techniques in order to help as many poor, hungry farmers as possible. But, limited training staff meant that many of the recent plantings were not well supervised, resulting in deviations from the strict FGW standards required for maximum benefit. I could also tell that these first-timers weren’t working together as teams in their God’s Love Groups to support one another and uphold the high standards. (GLGs are neighboring Farming God’s Way farmers who meet regularly to encourage, support and help their members. They also study God’s word, particularly the multitude of Scriptures that speak about planting and harvesting, working hard, and supporting each other in the body of Christ.)

We knew, however, that this wasn’t a casual test to demonstrate the value of Farming God’s Way—the drought and poor harvest from last season made it a matter of life and death for many. So, with many words of encouragement, our team of four trainers set about getting first-time FGW farmers back on track. I also encouraged the experienced FGW farmers to join us as mentors so that, after we left, they could continue to support the newbie farmers. 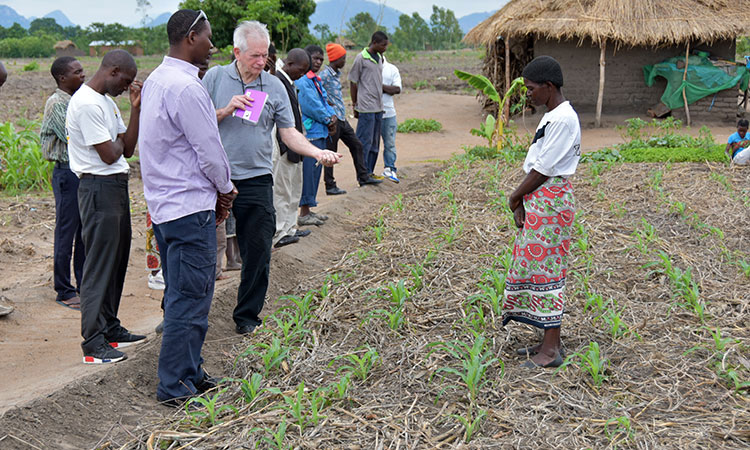 Day 3, Dickson Shuwali and I critiquing a first-time FGW farmer’s field. Note that her rows of newly sprouted maize are not in straight lines, just one of a number of issues that resulted from having limited supervision—an unavoidable problem if we were to succeed at getting famine-vulnerable families like this one a sufficient harvest in a few months

The next day we visited some farms of second and third year FGW farmers. It was hot and we walked several miles from farm to farm. We found their farms were much better than the farms we visited yesterday. Their rows were straight and had a good mulch cover on their fields. After a traditional lunch in a village church, we met with about 40 God’s Love Group members. The meeting was electric with enthusiasm as the farmers sang and worshipped God, and then shared testimonies of God’s goodness toward them! I’ll be sharing the details of those testimonies in the months ahead. It was gratifying to hear them tell of how God has led them to help each other in times of need. I witnessed the body of Christ being formed among these farmers—what an encouraging sight! They genuinely love each other and are committed to help each other. This is Book-of-Acts Christianity in its simplest form. 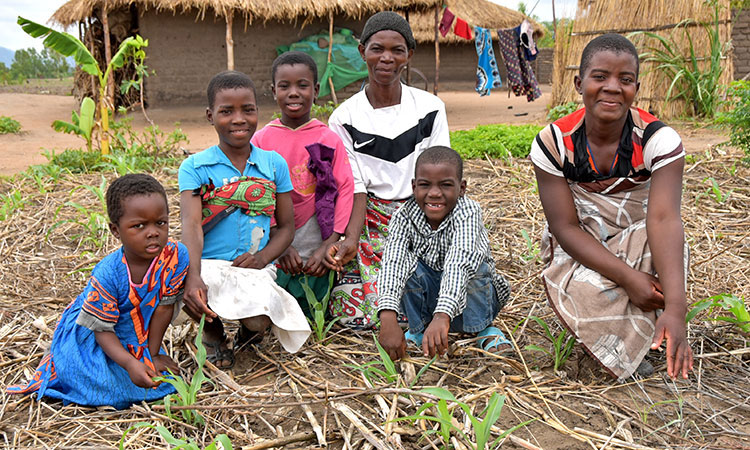 This widowed mother and her five children rely on this small farm (less than 1 acre) to feed them. Hunger and poverty are a daily reality for them, and FGW is their only hope to break free.

We began day three with a meeting at a church building in another village. There was enthusiasm again as the farmers shared their testimonies. Everyone we met with this day was a first-time FGW farmer. The farms we visited were generally good FGW implementations, but with some of the same problems we observed on the first day. I’m so glad we could be there so soon after the planting so that we could steer them back on track. We want them to succeed—not only so that they can feed their own families, but also so that skeptical neighbors can see what Farming God’s Way can do for them. It is very important that first year farmers get it right and have abundant harvests so that FGW can rapidly transform Africa. A revolution is taking root in Africa (pun intended), and I’m thrilled to be part of it!

We were in a dryer region of Malawi where the hunger problem was more severe. Some of the farmers were begging me for financial help for them to buy fertilizer. I was moved by their plight, but I resisted giving them handouts. I don’t want them to become dependent on me or others to give gifts to them to meet their daily needs. But, my soft heart being what it is, my mind began mulling over ways we could help in this crisis without creating dependency. Together with counsel from my partners Charles and Dickson, we came up with a plan to set up a GLG benevolence fund that would be entirely African in its leadership. Heaven’s Family would provide the seed funding, but would immediately step out of the picture so as not to be seen as a foreign source of help by the desperate farmers. 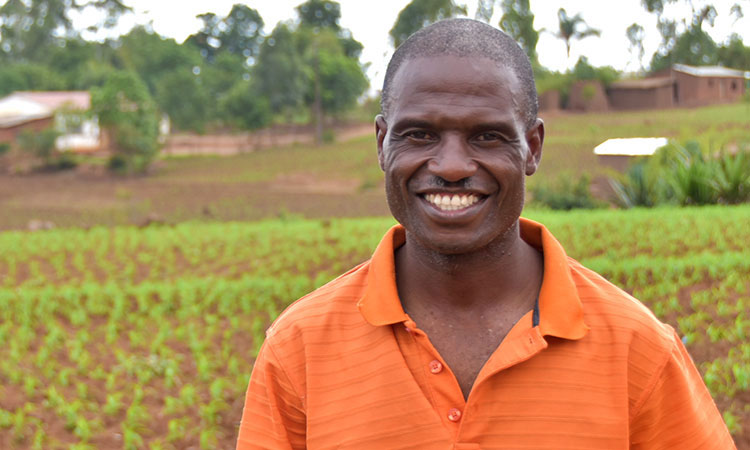 Joseph Maravanyika, our ministry partner and FGW trainer from Zimbabwe, was able to join us for our visit to Malawi but not Rwanda

Our last day in Malawi arrived quickly. After breakfast we packed up and, at my suggestion, we took Charles’ wife, Regina, to visit their son Andrew, who is attending university for nursing and midwifery in Blantyre. Heaven’s Family is sponsoring Andrew’s study through several Heaven’s Family ministries—Farming God’s Way Ministry, the Education Ministry, and the Critical Medical Needs Ministry. Andrew is doing well academically and has been elected president of his class. After leaving Andrew, we proceeded to the Blantyre airport. Our FGW team, including Regina, enjoyed a light hearted lunch at the airport restaurant. Regina had taken such good care of us, so I was happy to bless her with only her second visit to a restaurant in her life. 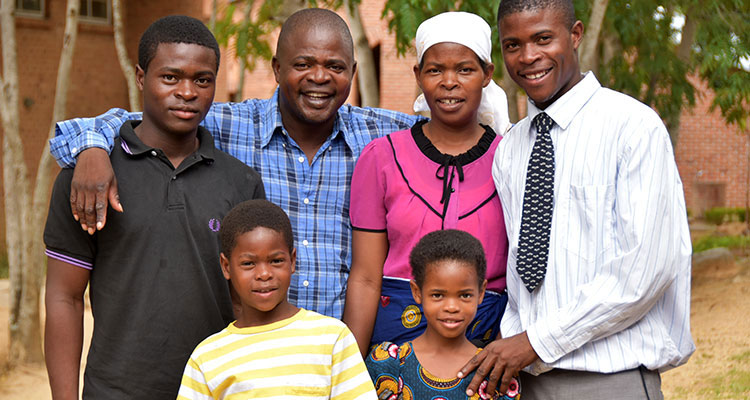 Andrew, far right, with his father Charles and mother (center), and his three siblings

Next stop: Rwanda. Stay tuned for my second blog about our amazing visit there, where we observed bumper FGW crops, witnessed the birth of an incredible African team of FGW trainers, and found ourselves speechless at a reconciliation ceremony where repentant murderers from the 1994 Rwandan genocide were forgiven by the families of their victims.

Thank you so much for giving hope to farmers through Farming God’s Way!

Here is the future generation of Farming God’s Way farmers (that’s our prayer!)