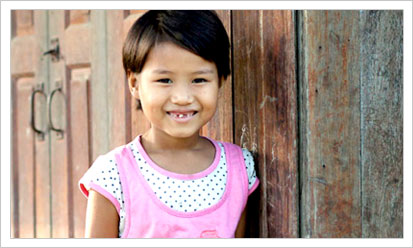 As we’ve worked over the past decade to serve orphans around the world, we’ve encountered cultural customs that are sometimes difficult for us to understand and accept. One is the common practice of divorced and widowed mothers in Myanmar marrying men who demand that they relinquish children from their former marriage. Those rejected children often end up in orphanages, of which Myanmar has thousands. We’ve only been able to conclude that extreme poverty pushes men and women, especially those who do not know Christ, to make decisions that would not be considered under other circumstances.

Such was the decision made by the widowed mother of three-year-old Sung Neih Par when her would-be-husband told her that Sung was a liability he could not afford. For Sung’s mother, it was likely a question of survival. Sung’s aunt, poor and overburdened with children of her own, reluctantly agreed to care for Sung, but she soon began looking for other arrangements. And that is how this sad story has a happy ending, as Sung ultimately found herself living with Christian foster parents.

Zing and Ngun had felt God’s call to care for orphans and unwanted children, and they were already caring for two (as well as their five biological children). After meeting with Sung’s aunt to discuss her inability to properly care for Sung, they agreed to take her in and love as their own.

Now living with her “forever family” in an environment of love and security, Sung has blossomed into a delightful six-year-old. She enjoys reading and badminton, is at the top of her class at school, and she already has her sights set on becoming a teacher when she grows up.

Although Sung could have received love and care in an orphanage—like hundreds of other children who are sponsored by Orphan’s Tear—she is blessed with something that no institutional orphanage can give her: a true family.

Of course, most orphanage directors truly love the children under their care, but none can adequately give dozens of children the individual nurture and attention that they need. We are convinced that orphanages are not the best solution for raising these precious ones. God intended for children to live in families, and so we want nothing less for orphans and the abandoned children of the poor whom we serve.

That’s why Orphan’s Tear is leveraging our influence to transition orphanages into small, self-sufficient foster families. We’re also searching for godly couples like Zing and Ngun who will open their homes and hearts to one or two orphans or abandoned children. We believe that every child deserves a family. Just like Sung. 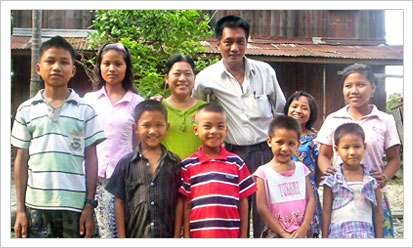 Sung, lower right, with her new mom and dad (back row, center) and
siblings, soon after she joined their family

By sponsoring a child at OrphansTear.org for just $20 per month, you will not only help provide food, clothing, education, and Christian nurture for an orphan or unwanted child, you’ll also help us work to get children out of crowded orphanages and into loving Christian families.

Help provide a safe home for an orphan or unwanted child