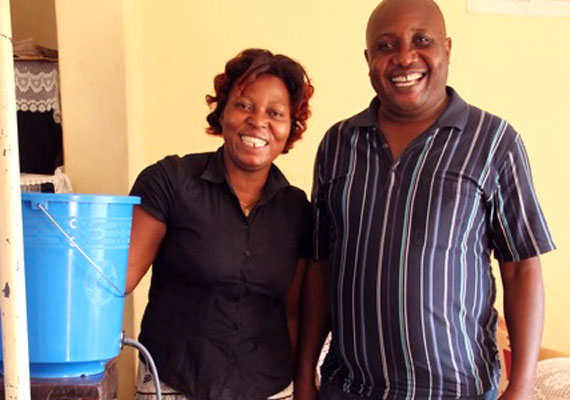 Since placing their Sawyer water filter into service, Pastor Kenneth Wafula, Beatrice and their family now drink the local water without fear

It may seem obvious to those of us who’ve always been blessed with safe drinking water straight from our kitchen faucets, but not all peoples of the world understand that microscopic organisms found in water from lakes and streams can bring sickness and death. Many refuse to believe in such invisible agents until it’s proven to them.

One such community is Mukona, Uganda. Water is plentiful, but people routinely drink from a contaminated source, frequently resulting in diseases such as dysentery, cholera and typhoid.

Heaven’s Family is working in Mukona through our partnership with Pastor Kenneth Wafula, providing micro-loans and other assistance. Last year the Safe Water Fund also began working there when HF staff members delivered 15 Sawyer water filters to Kenneth. These filters effectively remove 99.99% of all bacteria, cysts, and other harmful contaminants for 1 million gallons of water, and are compact enough to fit in a pocket (except for the buckets they are attached to, which are purchased locally).

Working with Pastor Wafula, our goal was to put a safe water plan into effect that teaches his community about the importance of safe drinking water, and then introduce the filters to our brothers and sisters in Christ as well as the rest of the community.

Once trained to use it properly himself, Pastor Wafula demonstrated the Sawyer filter and explained the differences between safe and unsafe drinking water at one of his church services. Most of the congregation was very excited about the possibility of having access to safe drinking water, but some still doubted that unfiltered water could hurt them.

But recently a typhoid epidemic broke out in the area. Pastor Wafula reported:

The water filters are amazing now! At first it was hard to sensitize the public to understand. But when typhoid broke loose, and all medias of communication were urging people to drink clean water, it paved doors for me to reach people with the water filters as the only way to curb the spread of typhoid.

Thanks to your generous donations to the Safe Water Fund many brothers and sisters in Mukona were spared from this terrible outbreak of typhoid, as well as from other water-borne illnesses. Now Pastor Wafula is receiving many requests for the filters. Besides providing clean drinking water, the filters are also opening doors for Kenneth to preach the gospel!

The need is great, and we hope to equip Pastor Wafula with more Sawyer water filters soon so that he can spread the word about safe water—and the Good News about God’s love and mercy—with other communities. And we also plan to help Pastor Wafula’s enterprising son, Kevin, set up a water filter distribution business to help him and his employees prosper economically. 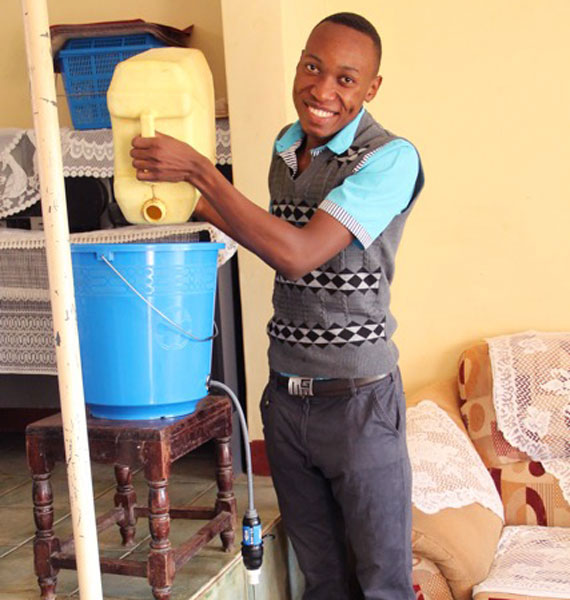 Their son, Kevin, demonstrates filling the unsafe water bucket which is then filtered by the Sawyer water filter hanging above the safe water bucket (not shown). The water is then stored in capped jerry-cans and used exclusively for drinking and cooking.

Thank you so much for your gifts to the Safe Water Fund! You are making a huge difference in the health and lives of many families, and providing a way to spread the gospel further!