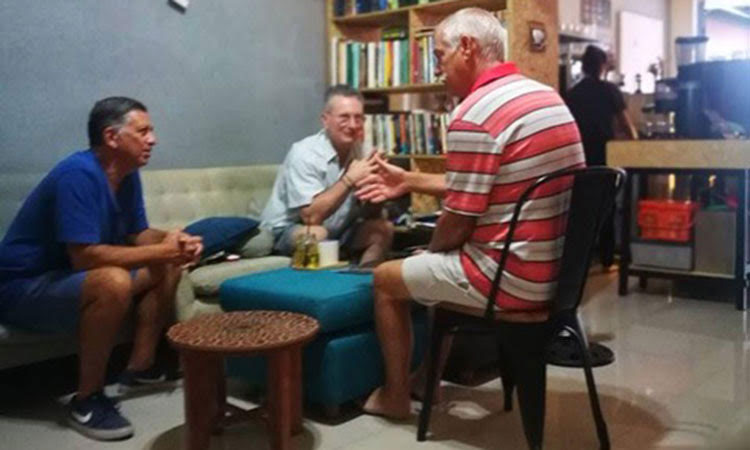 77 is a good number, I think. Reaching out to the outcast, perverse, rough-around-the-edges men of Pattaya, Thailand (often called the sex tourism capital of the world) was not what our partner had in mind when he and his wife, Jaidee (who works to help rescue victims of sex trafficking) settled in Thailand as missionaries more than 20 years ago. After all, it was easy to see young women as the victims, and these men as predators—and yes, many of them were—but God often sees things in a much different way.

And so it’s been that, after being diagnosed with Parkinson’s disease several years ago, Jack found himself ministering to a different kind of the “least of these” than he expected—those despised by almost everyone else. 77 mere shells of their former selves have stepped through Jack’s cafe door. They once had plunged headlong into sex, drugs, and/or a dozen other vices—and reaped the awful consequences. But many have repented, leaving the chains of sin that once bound them right there in Jack’s presence, and have walked out as free men (and a few women)…new creations in Christ!

Jack once told us, “God has a soft spot in His heart for rebels…like the adulterer David, the drunkard Noah, the traitor Peter, the torturer Saul of Tarsus. What can God do with a murderer, an abuser, or a drunk who is now completely consecrated to Him?” Jack is finding out as he continues to disciple many of them.

Maybe God has opened your heart to these outcasts as well—and to the greatest human trafficking prevention method of all: addressing the primary source of the problem (decreasing the “demand” for more victims), thus protecting many from exploitation.

But earlier this year the Cafe building’s owner decided not to renew their lease, so they had to quickly find another location.

Jack was discouraged at first. “I said, ‘But, Lord…why the move and all the additional costs?’ …but God reminded me that His plan is not our plan, and to trust Him” (Proverbs 3:5,6). So they did, and “Praise the Lord! We found a house/shop on a quiet road, right around the corner…there is more parking and it’s right across the street from a condominium, meaning lot’s of new customers!”

Jack continues to minister to broken men as God directs them his way. Many reported having no clue why they felt led to seek Jack out (but the Holy Spirit sure did!). Jaidee is ministering to victims of sex trafficking, and they both have an active prison ministry.

Jack and Jaidee have a vision for a Parisian-style outdoor cafe in their new location that will attract many in the area—and into the “net” the Spirit of God has set as he continues to greatly use his servants—Jack, a broken and humble man who shakes and has difficulty walking and talking, and his wife Jaidee—to free those once bound in terrible sin.

Family, thank you for making this kind of rescue work possible, and for your willingness to follow after the heart of God, even when your natural instinct is to turn away. Jesus is still in the business of healing and restoring the most vile of sinners. That gives us great hope for ourselves, too!

P.S. If you want a stake in this vital ministry to outcasts—one that shows the transforming power of Christ to redeem sinners AND prevents the exploitation of women and children—click here.

From the Front Lines of Yangon
Tackling Trauma with Love