The Books for Discipleship Fund at Work in Mexico 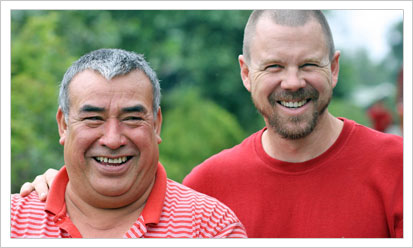 I liked him from the moment we met. Like most Mexicans, he has three names that reveal his lineage. His middle name, Mercado, is his father’s last name, and his last name, Hernandez, is his mother’s last name. Nine syllables in all that roll off your tongue like poetry: Sergio Mercado Hernandez.

Through our interpreter, American missionary Jason Fitzpatrick, Sergio told me that twelve years ago he was just a “Católica Romana de credo,” that is, a Roman Catholic pig…speaking not against Roman Catholics, but of his own behavior. He had been religious, yet completely selfish. A friend, however, invited him to his Pentecostal church, and there Sergio heard the gospel’s call to repentance. It knocked him over like a charging bull, and Sergio found his face in the dust. He cried out for God’s mercy and became a changed man. From that day, he’s never looked back.

Sergio soon led his wife and their four children to the Lord. Then he turned over the management of his auto parts and repair business to one of his sons. Now Sergio works for Jesus every minute of every day, serving others anyway he can. An evangelist and pastor, Sergio has planted ten churches.

Sergio told me how one of those churches began. He visited a man whose doctor had told him to purchase a casket because he was in the final stages of cancer. Sergio led that man to the Lord and took him to be baptized, encouraging him to look to his new Lord for healing. (The man’s temperature was 104 degrees, and Sergio said that steam came off his body when he lifted him out of the water!) Although the man couldn’t walk to the place of baptism, he walked home. He is still alive one year later. 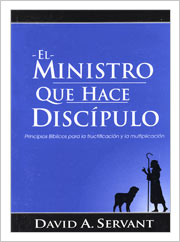 A copy of a Spanish
The Disciple-Making Minister

That miracle was the catalyst that launched Sergio’s church in the town of Xicotepec, and that church has 60 members today.

Six months before I met Sergio, Jason gave him 20 copies of the Spanish version of The Disciple-Making Minister. Sergio immediately read it and has since been teaching all of its chapters, subject by subject, in his churches. And he has given away those 20 copies—and 80 additional copies—to the many other pastors whom he knows. He said the book is having quite an impact on many of them. As he told me some of their stories, he kept referring to it as “El Libro Azul,” the Blue Book.

Sergio said that his favorite chapter of the Blue Book is the one titled, “The Christian Family,” because so many Mexican families are in crisis. They need to be grounded in biblical truth, he explained.

Because of gifts to the Books for Discipleship Fund (formerly the Books for Pastors Fund), we’ve been able to print 2,000 copies of the Spanish version of The Disciple-Making Minister in Mexico that are being distributed to hundreds of pastors and Christian leaders. The Disciple-Making Minister has also been printed in 22 other languages that are being distributed around the world.