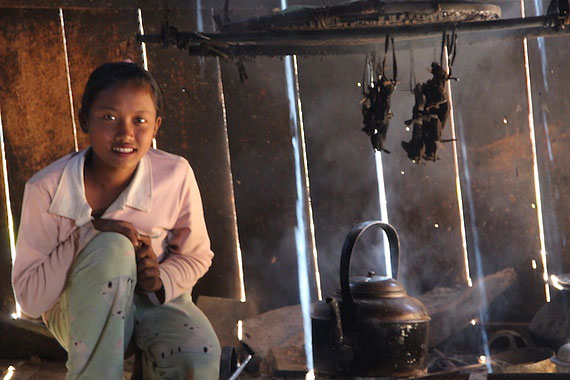 Beauty and the Beasts: A young girl in the village of Hnah Thail poses beside her home’s indoor cooking hearth, above which are hanging smoked mice

Chin State is all mountains, and its people are mostly slash and burn subsistence farmers. Every year, the able-bodied of each village spend months cutting down acres of forest using nothing more than hatchets. Substantial logs are hatcheted into smaller pieces to be used for cooking and heating. Smaller branches are left behind, and in March, hillsides are burned to clear the land. Then, either corn or rice are planted, but the soil can only sustain one year’s corp. So the next year, more forests have to be cut.

Depleted cropland slowly turns back into forest and topsoil is rejuvenated, ready to be used again for a single year of farming 25 to 30 years later. The Chin people have been repeating this cycle for as long as anyone can remember.

Below are two photos that illustrate what they refer to as “shifting cultivation.” In the first photo, the red arrow is pointing at a distant hilltop village of about 30 homes. The blue arrow is pointing at forest recently cleared, waiting to be burned and planted in March. In the second photo, I zoomed in so you could better see that same village, and in on the slopes in the foreground, you can see former cropland that is slowly turning back into forest. 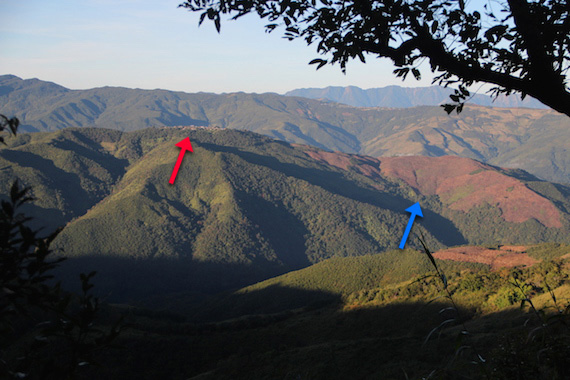 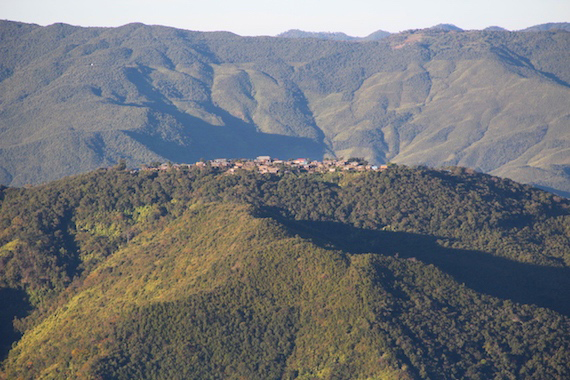 In the three villages I’ve visited today (where there are a total of 137 families and 10 churches), everyone has told me how this year’s rice harvest has been poor due to drought, and they don’t have enough stored rice to carry them to next year’s harvest. So we’ll be providing rice banks for them (a concept I’ll share more about in a future blog).

We’ve already, however, made 32 loans of $100 to $200 in two of these villages, and villagers are excited about their soon-coming profits in pigs, ginger, peanuts and sunflower seeds. In other villages where we began offerings micro-loans a few years ago, profits from cash crops have been so good that most everyone has stopped “shifting cultivation.”

I spent the better part of the day visiting borrowers in their humble homes and listening to their stories. Below are some of their portraits, with captions. 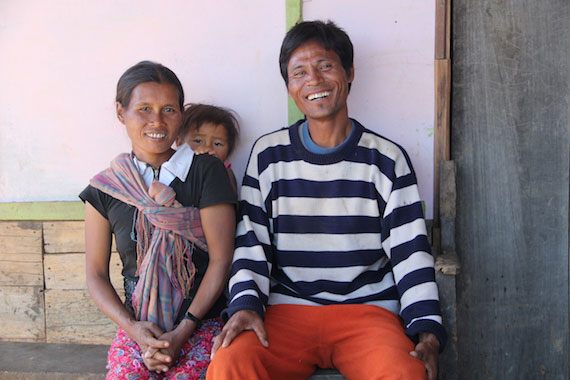 These borrowers were very excited about how well their ginger is growing, and they expect to turn a good profit on their $100 loan. I learned from them that, on average, the equivalent of only $700 passes through their hands each year. 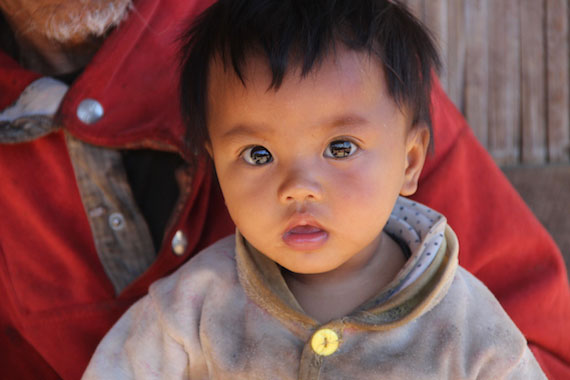 No shortage, as usual, of cute babies

No shortage of cute kids either 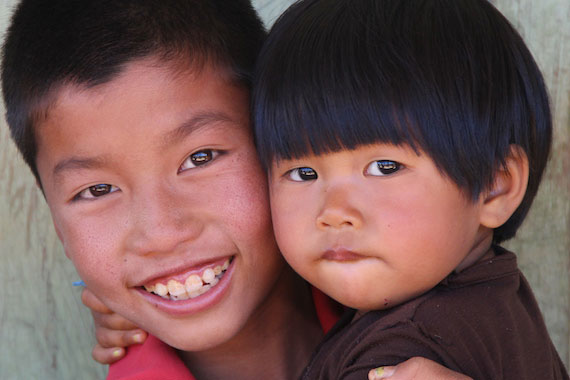 Most of the older children are happy to see a white-skinned person for the first time in their lives, but the younger ones don’t often trust me! 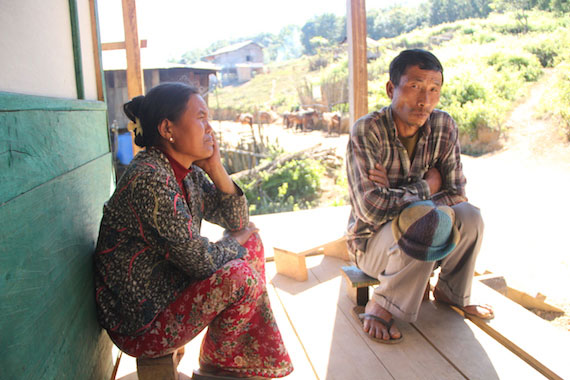 Since I so often take staged portraits of people whom I ask to smile, I decided to show you a more candid photo of one couple whom I spent time with today. During our conversation, they impressed me as strong believers and hard-working folks, and I offered them a special loan for PVC pipe so that they can irrigate their rice field. 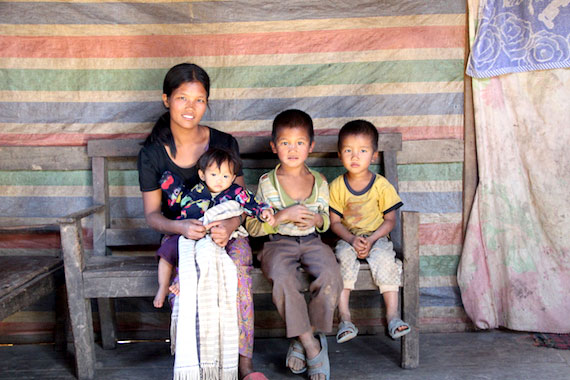 A young mother with her three children in their sparsely-furnished home. Dad was out working in their field when I visited. 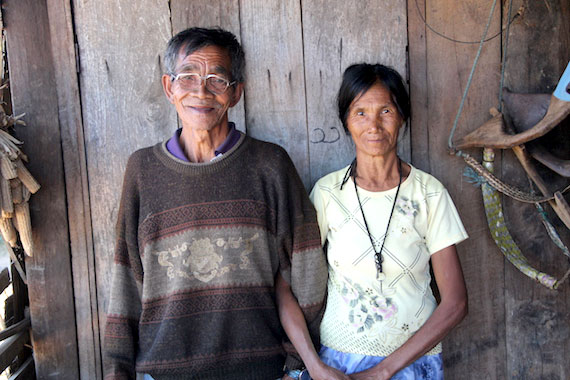 This older couple was a delight to talk with. She weaves beautiful traditional fabric with a hand loom to earn some income. 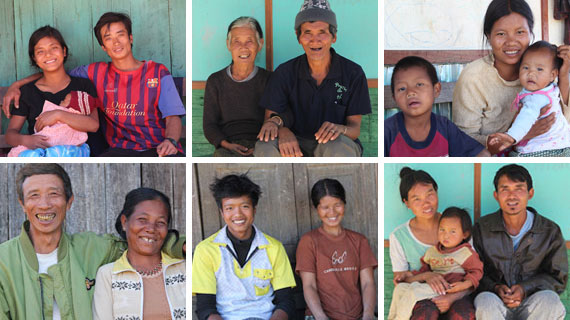 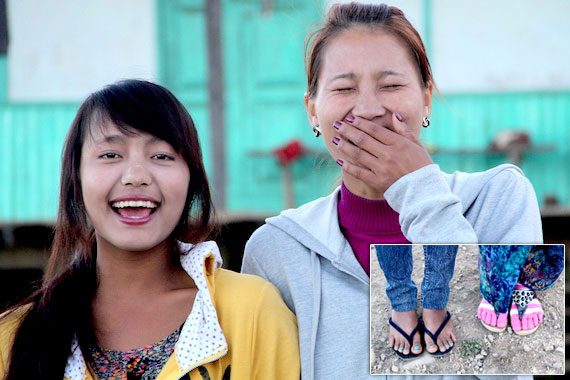 These twenty-something girls thought it was so funny that I took a photo of their colorful feet. Both have signed contracts with agents who will find them work doing domestic help in Malaysia, where they can earn $350 per month. The agent gets the first 6 months of their salaries as payment.