The Ennoblement of a Secular Vocation

My calling to vocational ministry came not long after my conversion to Christ, during my freshman year at Penn State. That call was so compelling that I can remember wondering then how other Christians could consider a “secular” vocation to be an option for their life’s work. “How could a person be a Christian and be majoring in business or education or biology?” I thought to myself. I was soon off to Bible School.

Thankfully I’ve expanded my perspective a little since then, and I now realize that God doesn’t call everyone to be pastors, evangelists or missionaries. So let me not waste another sentence before I say it: For the true follower of Christ who is not called to vocational ministry, “secular” work is a sacred calling, an expression of his or her love for God. To separate the sacred from the secular is sacrilegious. Paul wrote:

Whatever you do, do your work heartily, as for the Lord rather than for men, knowing that from the Lord you will receive the reward of the inheritance. It is the Lord Christ whom you serve (Col. 2:23-24).

The ramifications of those two verses are many.

Whether you are a factory worker, flight attendant, engineer, waitress, accountant, homemaker, carpenter, business manager or owner, you should apply yourself to your vocation with as much devotion as any evangelist or pastor does to his work, conscious that yours is also a high calling to glorify God in what you do. Those who do, regardless of how mundane their tasks might be, are not among the multitudes who are “leading lives of quiet desperation.” They go to work each day with a purposeful joy, honored to serve the King of the Universe. They wash dishes, push pencils, ship goods, solve problems, manage employees, teach students, and close deals to “feel His pleasure”—in the words of Scottish runner Eric Liddell of Chariots of Fire fame.

But one can only “feel God’s pleasure” when one does his very best using his God-given abilities. And one must do his work with as much integrity as is required by God of the pastor or missionary. There are not two standards, one for ministers and another for those working in the marketplace. So do your work with integrity! Eric Liddell is most remembered, not for his gold medal or his speed, but for the fact that he would not violate his conscience and run on Sunday. He desired the praise of God more than the praise of men, and God honored him for it. The Lord is keeping much closer track of how we earn our living than how much we earn for a living. Christians should be the most dependable, honest, hardworking, conscientious, fair, considerate people in the marketplace. When they are, they at least partially fulfill their calling to be the salt of the earth, glorifying their Father in heaven.

When you work with integrity and excellence, you can also be bold for Jesus. I know of Christians in the workplace who are fearless (and respectful) in sharing the gospel, and they get away with it because they are held in such high esteem. They are good at what they do, indispensable employees and respected bosses. Their lives are a living testimony to the power of the gospel. As was said by St. Francis of Assisi: “Preach the gospel at all times. If necessary, use words.” “Walking the walk” gives us the right to “talk the talk.” Otherwise we are not “witnesses” but “nit-witnesses.”

Even Paul Was a Tent Maker for a Time

You have probably heard the phrase, “Tent-making missionary.” That is a missionary who earns his own living using his God-given skills, and not from the offerings of God’s people. That is how every Christian working in the marketplace should see himself or herself. Your job supports at least one missionary—you! Your job is how you support your ministry. If you are primarily going to work each day to earn money, you are going to work for the wrong reason. You are an apostle of sorts, helping to fulfill the Great Commission, going into all the world, and likely to a part of the world that God is sending only you. Your ministry is unique. Get up each day to shine your light in the darkness!

Of course, one’s work can become one’s idol. Be cautious of that (see 1 John 5:21). Writing to workaholics, Solomon said, “One hand full of rest is better than two fists of labor and striving after wind” (Eccl. 4:6). Regardless of what you believe about the Sabbath under the New Covenant, it was based on the fact that even God took a day off after six days of work (see Gen. 2:2-3). And during those six days, He didn’t work nights! (see Gen. 1:23). You’ve probably heard what Thomas Edison’s wife said when he yelled to her, “Honey, I’ve invented the light bulb!” She yelled back, “GREAT! NOW WOULD YOU PLEASE TURN THAT THING OFF AND COME TO BED?”

Christians in places of authority in the workplace should not forget that their authority is God-given (see Rom. 13:1-4). They should thus use it to serve His interests, using their influence to work for justice and mercy, two things that are extremely important to God (see Matt. 23:23). The rule of thumb is simple: “Treat others as you want them to treat you.” If that rule were followed, it would be the end of the exploitation of people for profit. Every corporation would have some kind of profit sharing plan that would include all employees, even those outsourced in developing countries. Many American CEOs would make much less. (That is my opinion, but this is my article.)

It is possible to be a righteous business person, but like Job, you may have to own your own company if you don’t want to be unequally yoked with the ungodly or exploit other people. There are times when standing for righteousness will mean job termination or forsaking profits, just like a missionary might be incarcerated or thrown out of the country where he labors. Be willing to pay the price to follow Jesus. Better to be terminated and trust God than to sell your soul for less than it’s worth.

The Few, the Proud, the Clergy

What motivated me to write this article was the inferiority complex that I often find among the “laity,” whose inferiority is often fortified by the superiority complex among the “clergy.” In some circles, the clergy are elevated to a place of royalty among us, commanding special treatment. “Touch not mine anointed, and do my prophets no harm” (Psalm 105:15) is a favorite verse. The plebeians down in the pews should stand in awe of these lofty leaders.

The Bible, however, does not support this kind of attitude. All true believers are functional members of the body of Christ (see Rom. 12:4-8; 1 Cor. 12:12-26). Every member is important and valuable. There really is no value distinction between clergy and laity.

And I’ve noticed that the salaries of all the “special people” are supplied by the regular folks in the daily grind, earning wages by the sweat of their brows. Jesus Himself was supported by such people (see Luke 8:1-3). His ministry depended on them. So all ministers and ministries today depend on those people. (And that is how it is supposed to be; see Luke 10:7; 1 Cor. 9:6-14; 1 Tim. 5:17-18). Without the tax-payers, the Marines are less than Boy Scouts.

So is working in a “secular” profession lesser than the calling to be a prophet or pastor? We should not forget that Jesus spent four times as many years as a carpenter than He did as a vocational minister. His Father said, “This is My beloved Son with whom I am well-pleased” at the close of those many years He spent earning wages in the work force…and before He began His public ministry. I think there are many children of God with whom He is well-pleased who are fulfilling their callings in the marketplace. Hats off to them all! Their reward is great in heaven.

Through covert means, Heaven’s Family helps smuggle tons of food into North Korea and distribute it to hungry believers. Those believers often carefully share their food with their non-believing neighbors as a means to open hearts to Christ. Through your contributions to our North Korean Christians Fund, you are enabling the light of Jesus to shine into the vast darkness of North Korea. 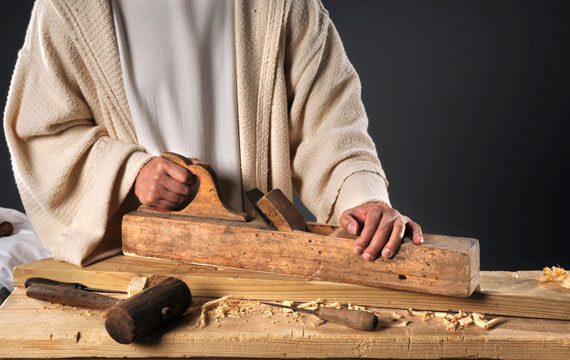