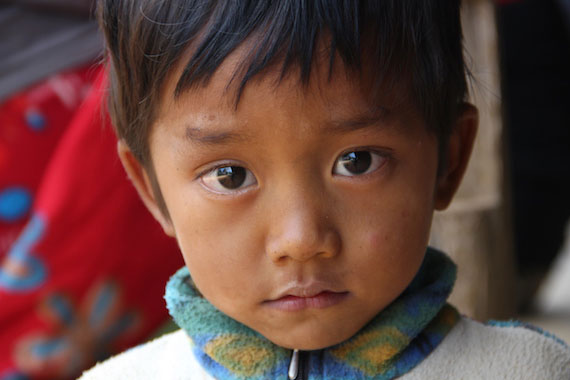 One of the many miniature Maul Zawlians whom we met

We started our journey in southern Chin State, and by the time we started heading north, I’d made deals with elders from 7 villages where Heaven’s Family has never served, villages with names like Gangaw, Cheng, Khuhlu, Ung and Tingsi. All but one of those 7 villages is predominantly Christian. In all, I promised loans totaling close to $50,000 that will initially benefit at least 250 families. Lord willing, they will prosper through agro-businesses.

Heaven’s Family’s loans are made to the village elders, who in turn collectively lend to credit-worthy villagers. If everyone pays back within one year, Heaven’s Family returns all the interest to the elders to use to benefit the elderly, widows and orphans in their villages. Christian capitalism at its best!

Those deals behind us, we proceeded to drive 170 miles north on dusty mountain “roads.” The trip took us 17 bone-rattling and sometimes nerve-racking hours (lots of opportunities to drive over cliffs), and we were glad to finally arrive at the village of Maul Zawl where a long greeting line waited, consisting of everyone in the village. They love us here, and the first thing they did was pray and give thanks to God.

We started serving in Maul Zawl about 5 years ago, even before we began employing the strategy of microcredit, by means of grants for “municipal improvements.” In the case of Maul Zawl, one of those improvements was piping water two miles from their water source. Since Maul Zawl was founded, Maul Zawlians had been carrying all their water in jugs those two miles. These days, they just walk a few steps from their front doors to use one of many public faucets that extend the reach of the village’s concrete cistern.

Over the past few years, just about every family in Maul Zawl has received a loan from Heaven’s Family during one of the several loan cycles. There have been no defaults.

On one of our days in Maul Zawl, I visited with a young man who is a husband and father of 5 children, who finally summoned the courage last year to take his first loan of $300. He could have borrowed as much as $500, but that scared him.

With his loan, he planted ginger, which he is soon to harvest. He is certain that the worst-case scenario is that he’ll double his money. He told me that when he pays off his first loan in a few months, he hopes to borrow $500! Below I’ve included a photo of his family, as well as some other photos that show what life is like in Maul Zawl. 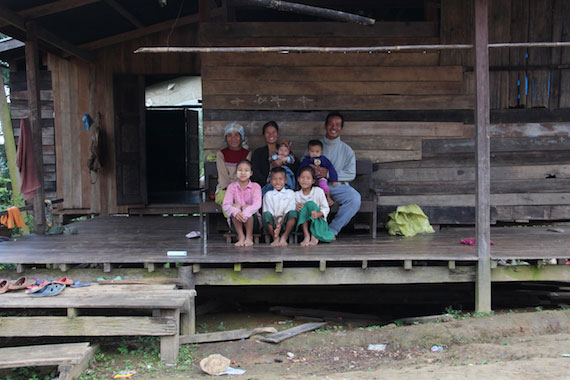 This is the family of 7 (+1 grandma) that I was telling you about, sitting on their front porch 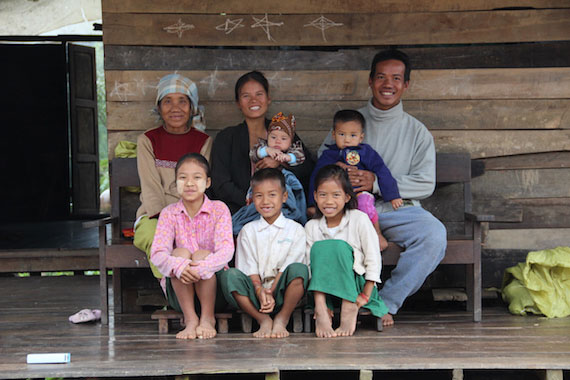 A close-up. The father told me that, on average, the equivalent of only $700 flows through his hands in one year. No wonder he was afraid to borrow $500. 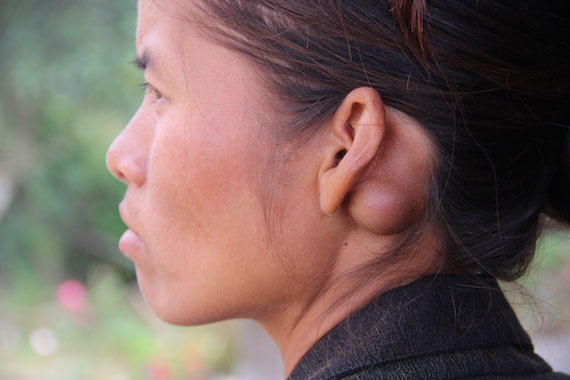 While I was talking to the above-mentioned family, I noticed the mother had a growth behind her left ear. Upon inquiry, I learned it had been slowly growing for 10 years. She had made the 3-hour journey to the nearest surgeon, and she learned that her tumor was operable, but the surgery would cost $100, way beyond the means of the family. We could not resist helping, and within a day, she had her tumor removed. 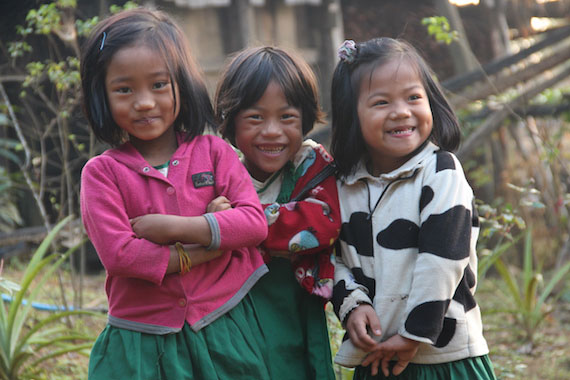 Three more miniature Maul Zawlians. Maul Zawl does have its own primary school, which these girls all attend. 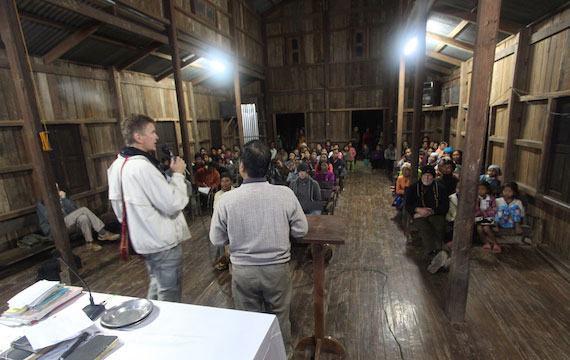 Many nights, we find ourselves in special church services where everyone in our team shares 10-minute sermonettes before cold (literally cold) audiences wearing coats and knitted hats. In this photo, team member Jeff Trotter attempts to light some revival fire with the help of interpreter Lalchhuan Mawia. Maul Zawl has 2 churches, a Methodist and a Wesleyan, which you would think would be very similar. (We Christians have a tendency to divide, don’t we?) 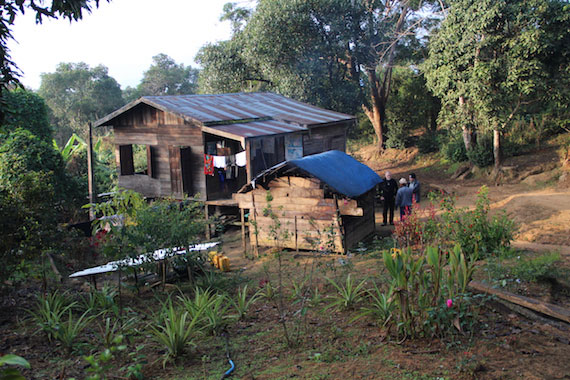 This is the chief’s house in Maul Zawl, where some of our team slept on the floor for two nights. In the foreground is the kitchen, where food is cooked over an indoor fire. 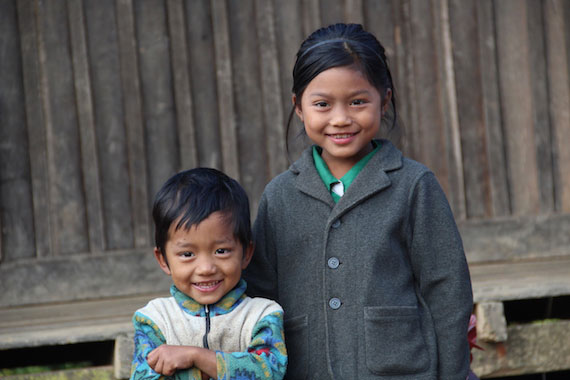 A brother and sister whom you will see on the front cover of Heaven’s Family’s 2016 refrigerator calendar (which will be mailed soon to most of our 2015 donors). 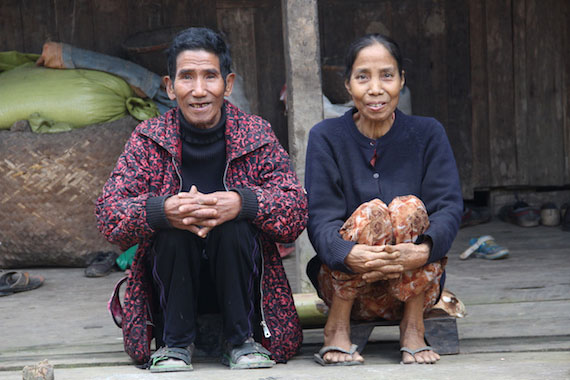 The man on the left has lived in Maul Zawl all 74 years of his life. He told me about all the changes that have occurred in the village since Heaven’s Family started helping, one of which was the fact that 10 families bought motor scooters (which cost about $600) in the past year. A motor scooter is an important tool to carry crops to distant markets that previously could only be reached by walking an entire day. 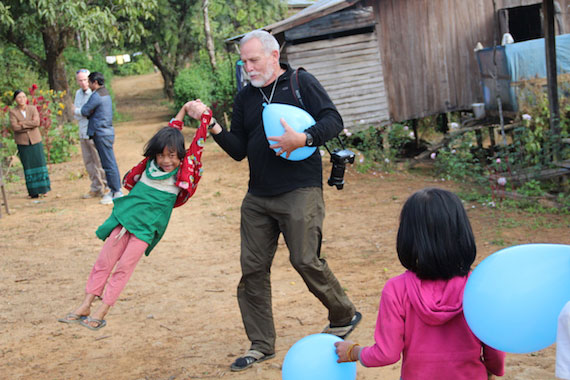 Team member Bruce Harris, who brought balloons and candy for the children in every village we visited, also served as a human amusement park ride.