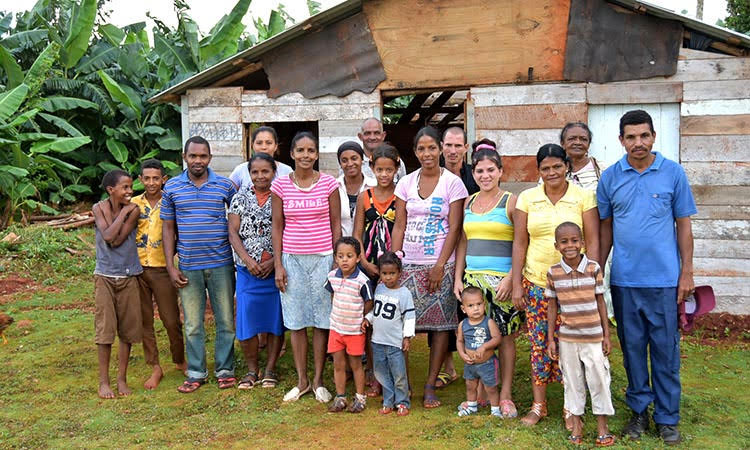 “This is all our government gave us,” one elderly woman said to me, while pointing to a single corrugated roofing panel measuring about 3-feet wide by 6-feet long. She was referring to the government of Cuba’s response to the destruction of her home by Hurricane Matthew last October. I had a hard time believing her story, until, that is, I heard it repeated by so many others I met this week.

After slamming into Haiti, Hurricane Matthew quickly traversed a narrow strait of blue Caribbean waters to reach the eastern shores of Cuba, where he did a repeat 140-mph-wind performance on his whirlwind tour north. Thankfully this time, however, the population received sufficient warning so they could flee to the safety of inland caves, resulting in no loss of life (compared to Haiti’s 1,000, plus many injured). Hundreds of homes were totally blown away, while others received heavy damage. Many near the sea were pounded mercilessly by high seas. 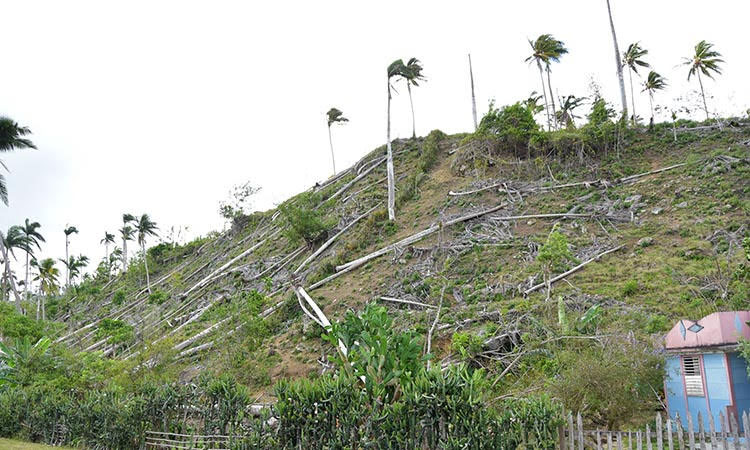 In addition to the destruction to homes and other buildings, Hurricane Matthew flattened thousands of trees; this scene is the norm for the entire region around the coastal city of Baracoa for dozens of miles

At left, doors and windows were barricaded in this home to try to stop the wind and waves (seen through the top of the window opening), but nothing could prevent the entire roof from being blown off; at right, this man is showing the height reached by seawater in his home

Unfortunately, the recent thawing of US-Cuba relations were not enough to persuade Cuba’s communist government to accept emergency US aid. But that didn’t stop the Disaster Relief Ministry from jumping into action through our Cuban partners. Interestingly, during my first trip to Cuba with other Heaven’s Family staff members in April of last year, I visited the city of Baracoa, which was right in the center of the area that was hardest hit. So, providentially, I believe, I had met many of the same people Heaven’s Family would end up partnering with to distribute disaster relief in the weeks following the hurricane. Many of them are chaplains in Cuba’s prisons.

The surprising result of Cuba’s self-imposed isolation was that, for all those I met this week, Heaven’s Family was their only source of help. The Disaster Relief Ministry provided emergency food supplies immediately after the storm, and in the weeks following, 1,720 roofing panels, 360 bags of concrete, large mattresses for the elderly and disabled, and a chainsaw to clear trees and make lumber to repair homes. In the months that followed, we invested an additional $10,000 to purchase building materials for those who did not receive them during our initial efforts. 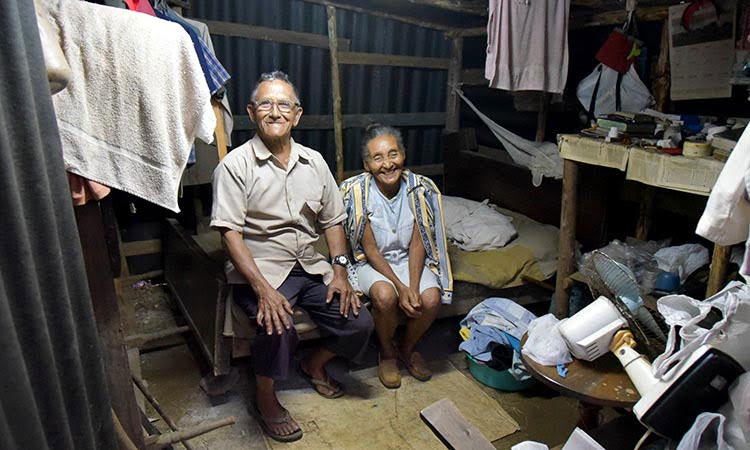 This 10-foot by 10-foot shack is home for this dear elderly couple, who were counting their blessings and thankful for the roof and wall panels they received from Heaven’s Family. They’re sitting on a mattress made of straw because the 20+ inches of rained dumped by the storm ruined the proper one they had before.

At left is a woman and her son who received roofing panels to replace the roof they lost, but still need lumber to shore up the home’s structure, as you can see behind them (Heaven’s Family will be helping them with those materials soon); at center is a prison chaplain who received a new roof; at right, I met this young mother of three along a road our team walked today, and marveled at her hardworking efforts to support her family, which included maintaining her home, a separate kitchen, a latrine and a healthy crop of corn!

At left, Pastor Elpidio and his wife, two partners who often blessed me with their joyful smiles; at right, another pastor and his family whom we helped today with a supply of food

I’ve always enjoyed the fact that the Disaster Relief Ministry was able, because of our relatively small size, to slip “under the radar” to help those who typically are not reached by larger relief organizations, while at the same time being able to avoid the governmental red tape required by their high-profile operations. I’ve also known that this nimble quality helps our efforts to be more measurable (as opposed to being a drop in the sea of relief aid that gets dumped at large, often chaotic distribution points). But this week, I felt an even greater sense of purpose each time I heard the words, “You were the only ones who helped us.”

Thank you for your compassion for the people of Cuba, and for making it possible for me to bless them in Jesus’ name on your behalf.

Today we left Baracoa for a long, winding road trip south to Maisi in this old blue Chevy, but we didn’t make it too many miles before the right rear axle decided to come loose (thankfully it only came out about 4 inches before our driver stopped to check the unusual noise it was making); later we ended up hiring this true “tractor-trailer” ride, a very slow bus type of transportation that is actually quite common to see on Cuban roads (but extremely uncomfortable!)

Cuba is well-known for its ubiquitous old American cars, but just about every mode of transportation is used (center); despite the chaotic appearance of this street, everyone seems to respectfully share the road freely, whether one’s driving a big truck, a horse-drawn wagon, or simply riding a bicycle

An update or blog is never complete without some pictures of children (and, in this case, a cute puppy who decided to catch a nap on my flip-flops while we waited inside a nearby home for a rain shower to pass before getting back onto our roofless “tractor-trailer” ride

Picking Up After Matthew
A Disaster within a Disaster