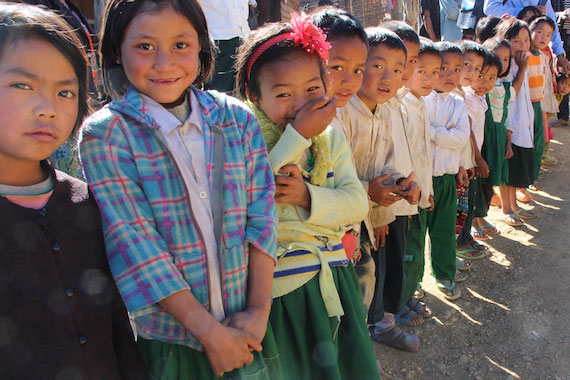 Their first-ever glimpse of a person with white skin

Today’s adventure required that we travel the day’s final 12 miles on motorcycles to reach the remote 300-year-old village of Dongvaa. As far as any resident could recall, I was the first white-skinned visitor. So it was a big deal to them.

When our team arrived at the village entrance, about three hundred people, dressed in their finest, were lined up to welcome me and shake my hand. But first, the village headman lead everyone in a prayer of thanksgiving, and a local church choir sang a hymn. Then I shook 300 hands, the children being last of all, who were lined up by their height. 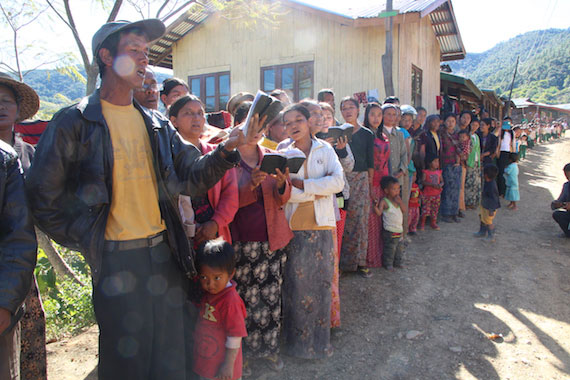 The choir singing a hymn upon our arrival, and the line of 300 people

We’ve just begun to serve in Dongvaa earlier this year by providing a rice bank. Because their rice harvest was so poor, the village doesn’t have enough rice to last them until next year’s harvest. So they have no choice but to purchase rice, which is relatively expensive from local sellers—who are at least 12 miles away. Through a loan of $2,500, we’ve enabled the village to purchase rice much cheaper—in bulk—in a far-away town and have it transported to their village. Once in Dongvaa, the village elders sell the 50-pound bags for about $1.25 above their cost. The bulk rice is still much cheaper than what local rice would cost. With their profits, the village elders not only will repay their loan, but in one year’s time they will have enough saved to make the bi-weekly bulk rice purchases using their own money. (Of course, if next year’s rice harvest is better, the village won’t need to buy any rice.)

Our goal is to wean the people of Dongvaa from slash and burn subsistence farming, which last year failed them, to growing a variety of cash crops. I spent considerable time talking to the elders about how that can happen, and I offered $100 loans to half of the village’s 70 families in order to help them get started buying seeds. (If those 35 families repay, we offer them 2nd loans that are at least twice as large in order to expand their businesses, as well as offer every other trustworthy village family a first loan.)

The elders were thrilled over my offer. In the evening, they killed some pigs and the entire village had a feast. When it was dark, many gathered at the largest of the village’s four churches to listen to the best sermon they’ve ever heard from a white-skinned person!

Below are some photos from my day in Dongvaa. You will be one of the first people in the world to ever see Dongvaa’s Fred Flintstone tricycles and their WWII Japanese bomb! 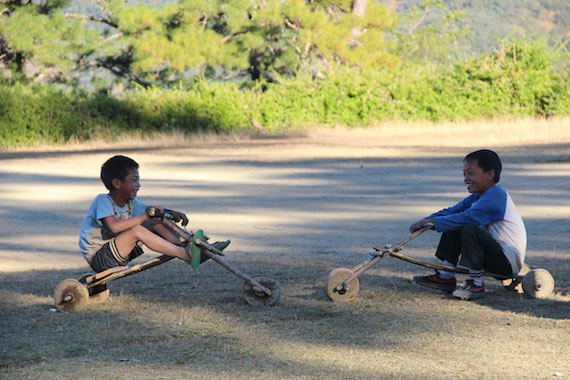 Put one of these under your Christmas tree: These ingenious Fred Flintstone tricycles are made entirely from tree branches. The wheels are log slices. 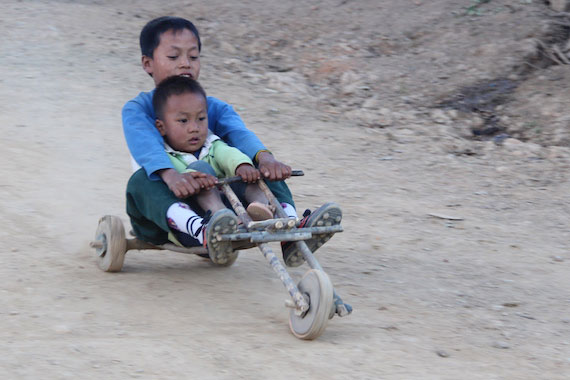 Mario Andretti and his little brother: Racing down the village entry road, this driver’s passenger doesn’t seem confident knowing that there are no brakes! 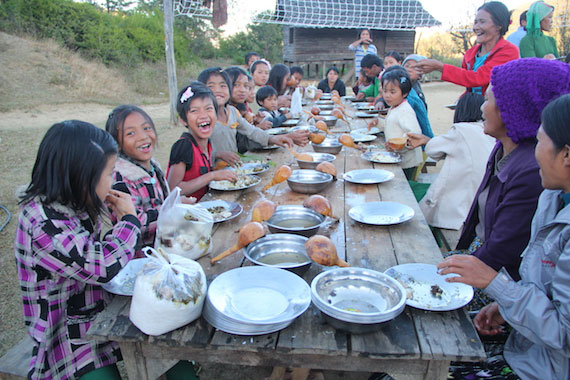 Celebration time: This evening’s feast of rice, soup, greens and pork was served in shifts on the village volleyball court. Most folks in rural Chin State eat without utensils, using just their hands. 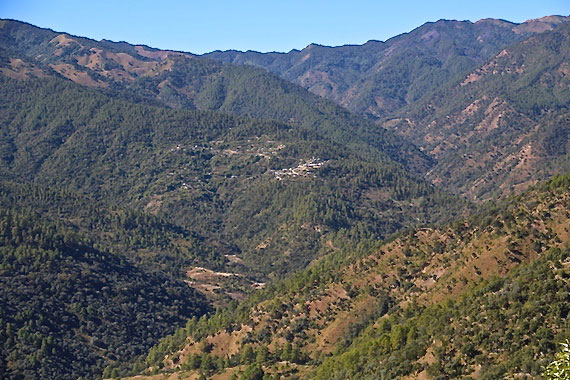 Can you find Dongvaa in the mountains? It is right in the middle of this photo. 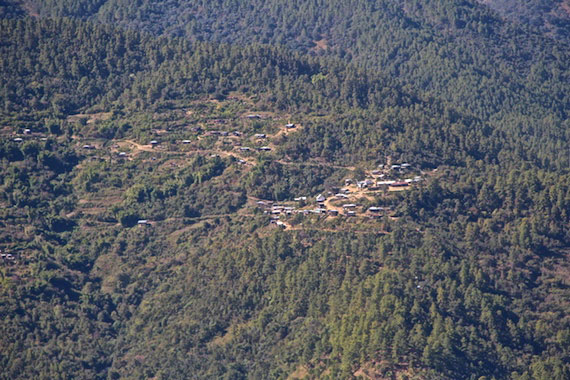 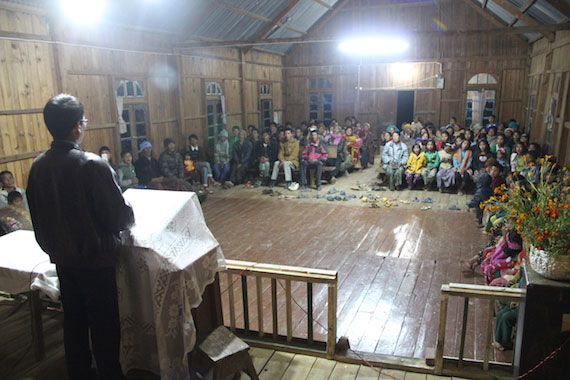 A two-dancer sermon: Our micro-banker in Dongvaa, Ko Myo Lwin, introducing me to about half of Dongvaa’s residents at the evening church service. The front area of this Pentecostal church does not have benches, in order to allow room for dancing! At the close of my sermon, two ladies danced during the final hymn. (I didn’t ask how many regularly dance at the end.) 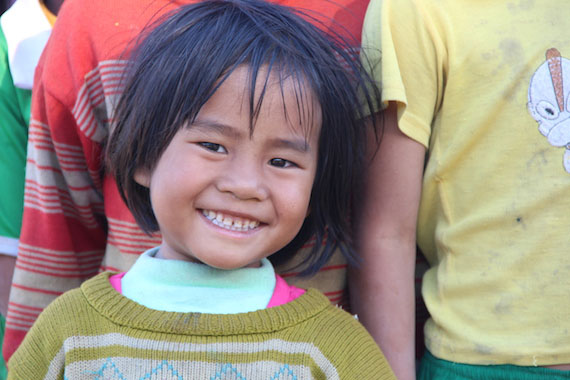 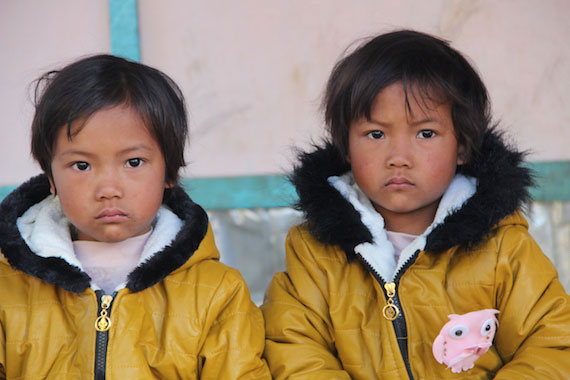 Try as I could, I could not get these twins to smile for me 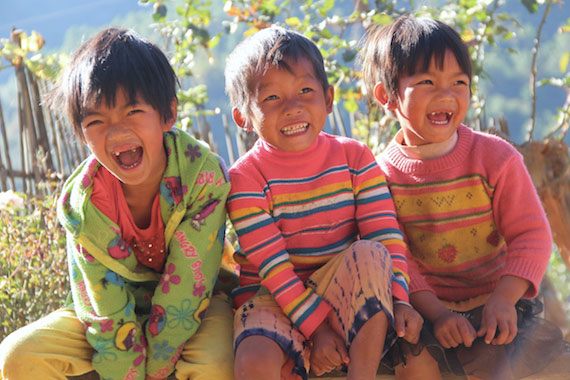 Some more Dongvaa munchkins who thought everything was funny! 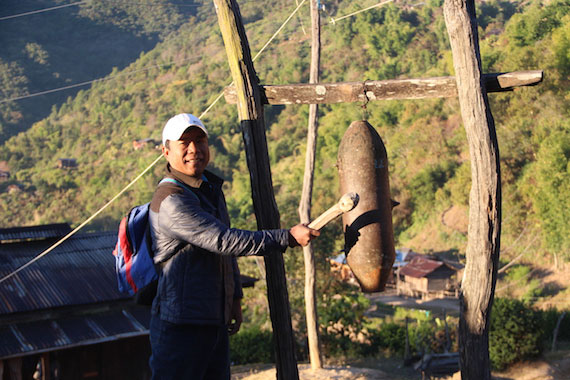 A nice ring: The Chin mountains were occupied in 1943 by the Japanese army during World War II. This dud Japanese bomb is now used as a church bell to call saints to worship. A modern example of beating swords into plowshares!