The Disaster Relief Fund at Work Around the Globe 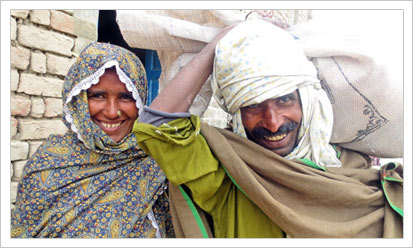 A grateful husband and wife, flood victims in Pakistan who received
help from Heaven’s Family

Despite the Mayan calendar’s alleged forecast and other dire 2012 predictions, last year wasn’t the natural disaster grand finale that films and tabloids heralded it would be. God is still in control.

That doesn’t mean that we at Heaven’s Family weren’t busy last year serving victims of natural disasters. There were still floods, hurricanes, typhoons and cyclones, and a few newsworthy earthquakes around the world.

It’s not in our mission statement or our budget to help where government agencies, insurance companies, and large organizations like the Red Cross render their respective services. Instead, we seek to help the “least of these” among our brothers and sisters in Christ as well as spiritually-open unbelievers in their time of desperate need.

Heaven’s Family helped thousands of victims of natural disasters last year, and I’d like to share with you some of that good news.

Pakistan was hit by unusual flooding again in 2012, and almost $8,000 was sent from our Disaster Relief Fund to help some very poor believers—forced from their meager homes—with food and other emergency supplies. Heaven’s Family also served many Hindu families among the thousands of flood victims. As a result, dozens came to Christ and were baptized.

After disaster strikes: a fruitful harvest follows when the love of God is
displayed by members of His caring family

The Philippines was hit hard by two typhoons. I personally traveled there last June in response to the first one and, together with year-end efforts to aid victims of the second, Typhoon Bopha, we provided $9,000 worth of assistance. We also supported outreaches to hurting people in devastated coastal villages, resulting in the salvation of many.

Many children have heard the gospel and have responded

Last November, Heaven’s Family staff delivered $5,000 in relief food and supplies to victims of Hurricane Sandy in the communist nation of Cuba, helping pastors to carry the message of God’s love to those suffering most—and elevating the stature and credibility of Christians in the eyes of a godless government.

Tons of rice and other food, as well as basic medicines, blankets—and
compassion—distributed to many

In the last few years, we’ve helped thousands of victims of Cyclones Nargis and Giri in Myanmar—and have seen hundreds come to Christ and new churches started. Local pastors have been empowered to reach many more for Jesus because of the help of Heaven’s Family‘s friends.

And I would be remiss if I were not to give you an update about all that Heaven’s Family has been doing in Haiti. I returned there with a team in January of this year, just as Haitians marked the third anniversary of the infamous 2010 earthquake that took over 300,000 lives. We’ve sent $85,000 to help Haitian believers rebuild over the last three years.

Damaged homes repaired and new ones built to replace those destroyed

When I hear people pessimistically ask, “Where has all that money gone that was sent to Haiti?” I tell them that I don’t know about funds sent through other organizations, but I do know where gifts through Heaven’s Family have gone. We helped spare the lives of over 2,000 believers in the months following the earthquake with food, medicine, and other supplies. Homes for 12 families were built and others repaired. A water well was drilled for an orphanage. Chicken and soap-making businesses were started to help believers become self-sufficient. A truck was purchased to help bring tons of supplies to needy families and transport scores of people searching for work opportunities. An English and computer school was opened. And, perhaps greatest of all, Heaven’s Family gave hope to many of our Haitian brothers and sisters.

The next time you hear about a natural disaster occurring in a poor country where there is little or no government assistance, where there are no insurance agents to write checks, or in a place that may not be receiving much media attention, remember that you may be there through your generous gifts to Heaven’s Family’s Disaster Relief Fund. Thanks for your partnership.

Natural disasters are unpredictable, and so is the resulting need. When floods, violent weather, or earthquakes bring victims to their knees, we know that God has given Heaven’s Family a window of opportunity to serve Him through the “least of these” and to reach out to softened hearts with the gospel. Your gifts to the Disaster Relief Fund prepare us to respond to such opportunities.

New and Improved!
Behind the Scenes at Heaven's Family

The World Didn’t End!
The Disaster Relief Fund at Work Around the Globe

A Bubbling Business
The Micro-Loan Fund at Work in Cuba

HF staff member Jeff Trotter snapped these two little Burmese beauties who were arrayed in traditional dress. While one potential future Miss Burma seized the opportunity to express the universal hope of beauty queens for world peace, the other seemed poised to unload a piece of her mind!