The Micro-Loan Fund at Work in Myanmar 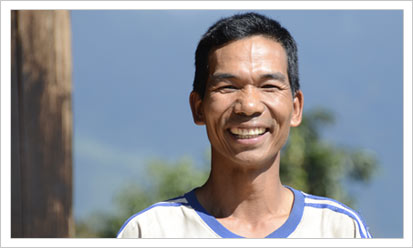 Some pastors think it is wrong to make money on the side by doing some kind of “secular” work, claiming that they should spend all of their time doing “ministry.” The apostle Paul, however, once called together a group of pastor/elders from Ephesus and reminded them of how he worked to earn money at something other than “ministry” when he was with them:

You yourselves know that these hands ministered to my own needs and to the men who were with me. In everything I showed you that by working hard in this manner you must help the weak and remember the words of the Lord Jesus, that He Himself said, “It is more blessed to give than to receive” (Acts 20:33-34).

The churches in Ephesus met in houses, so naturally they were small. When a pastor has a small flock (a biblical idea), his flock often can’t afford to pay him a full-time salary. Beyond that, caring for a small flock rarely requires his full-tme attention. So the simple solution is for him to make his living just like everyone else.

Pastor Moses Lal Tlang Piang is the pastor of a small Wesleyan church in the remote village of Maul Zawl, in mountainous Chin State of Myanmar. He’s not afraid to work. But prior to a micro-loan courtesy of Heaven’s Family’s Micro-Loan Fund, he had nothing to work with. 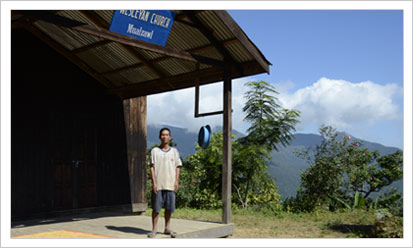 Moses Lal Tlan Piang in front of the church he pastors

When Moses received his first loan last year of $120, he purchased tomato seeds and planted them, growing 1,100 tomato plants on land that the Chin State government allowed him to use for free. Four months later, Moses used part of his loan to pay for his first harvest to be transported to market. After all his expenses were paid and his tomatoes were sold, pastor Moses made a 32% profit, and that was just in a few months.

Because of his hard work and success, Moses was offered a second loan twice the size of his first one. This time he planted 1,500 tomato plants. Moses thinks he can grow three crops of tomatoes per year, which could result in annual profits of close to 100%!

We hope to help pastor Moses be even more profitable by sending him to a 6-day intensive business school that Heaven’s Family is funding in a nearby town, where he will learn biblically-based business principles. 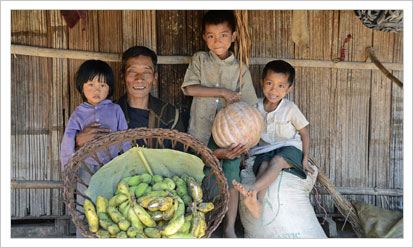 A Zatual Village father with his three children displaying some of their
produce that is helping them lift themselves from poverty, all due to a
$100 loan that he used to purchase seed

Like the apostle Paul, Moses is not only setting a good example of hard work before his flock but he is also prospering, enabling him to “help the weak” and lay up treasure in heaven. All because of a tiny loan.

Other Maul Zawlian micro-borrowers whose hard work is paying off

Heaven’s Family is helping all 50 or so families in Maul Zawl lift themselves from poverty through small business micro-loans. Most loan recipients are growing cash crops, including yams, turmeric root, and bananas. Their hard work is resulting in prosperity. In one year’s time, the number of motorbikes owned by Maul Zawl villagers has grown 300%…from 2 to 8! Those motorbikes are cutting the cost of transporting produce to market.