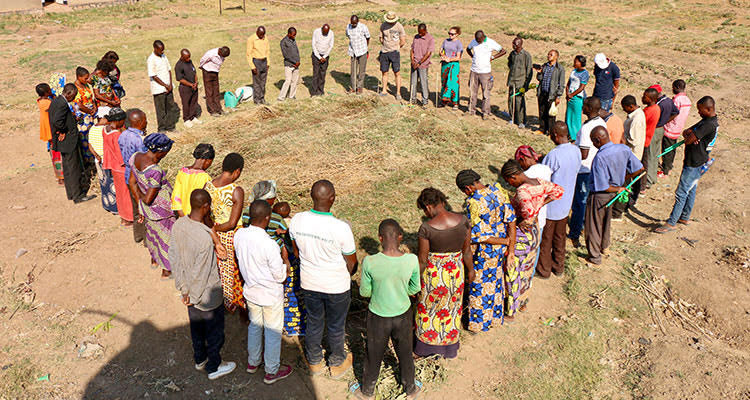 Farmers and trainers pray through 2 Chronicles 7:14 on the newly planted Well Watered Garden

Yes, we’re launching Farming God’s Way into DR Congo (DRC)! Why? Well, it wasn’t actually on our radar until April of this year—and then the Lord dropped it into our lap!

The process began several months ago, when David Servant, the founder and president of Heaven’s Family, told us about a generous donor who began working for a mining company in the DRC. He is very involved in disciple making, and saw Farming God’s Way techniques as a means to help the Congolese people feed themselves and advance the gospel through God’s Love Groups (GLGs)—the discipleship heart of the Farming God’s Way Ministry. The estimated number of professing Christians in this African nation is about 63 million, or 96% of the population. Although that seems like a lot of Christians, our partner says there’s little evidence that many are born again.

Many pastors, he says, only preach a gospel of prosperity and manipulation. Such preaching does not produce new births, but religious people who call themselves Christians though they may not know the true and living God (sound familiar in the US?). Therefore there is a great need for the gospel of grace and the whole counsel of God to be taught in the DR Congo.

That’s a bleak picture of the spiritual climate in DR Congo. The economic climate is also dismal—the nation continues to rank among the poorest in the world (176th out of 187), with one of the highest rates of extreme poverty in the world. Child malnutrition is widespread, and most of the population lives in conditions of moderate-to-serious food insecurity. I learned that only 13% of the nation’s arable land is farmed—the rest just lies dormant. Sadly, the DR Congo must import most of its food. So, if poor Congolese farmers could increase the amount of land being farmed, and if they would use better farming methods, they could produce much more food, transforming their lives and their nation.

If we can teach Farming God’s Way to enough poor farmers, we can transform millions of lives nutritionally, economically and spiritually. By bringing them together to work in GLGs, they can begin to practice authentic Christian community and start making disciples. There is limitless potential to impact lives for the kingdom of God in DR Congo, so taking FGW there is a no-brainer!

We only have one small problem—TIME! Dick Samuels and David Servant went to DR Congo in August to search for (and found) two “men of peace” (an often neglected teaching of Jesus whereby spiritual seekers are sought out with the Holy Spirit’s guidance, providing an inroad into a culture or region), while I was in Kenya. But the DR Congo’s rainy season/planting season starts in mid-November. So we had to move quickly to organize and conduct our initial FGW training in October. We had to gather the first group of farmers to train, get plane tickets and visas for our multinational team of trainers, and we needed hard work and the favor of God.

God is faithful, and I’m thrilled to tell you that our incredible team of African FGW trainers stepped up to successfully launch FGW in the DRC. We owe a special thanks to you, our gracious investors who made this “lift-off” possible, to the glory of God. We successfully trained 35 farmers from 5 different churches in FGW. They are now preparing to plant their first implementation of FGW as I write this to you.

In my next update I will share with you just how that 3-day training went and some of the valuable insights I gained—stay tuned!

Thank you so much for your time.

What a Revelation!
What? Doing It Wrong?