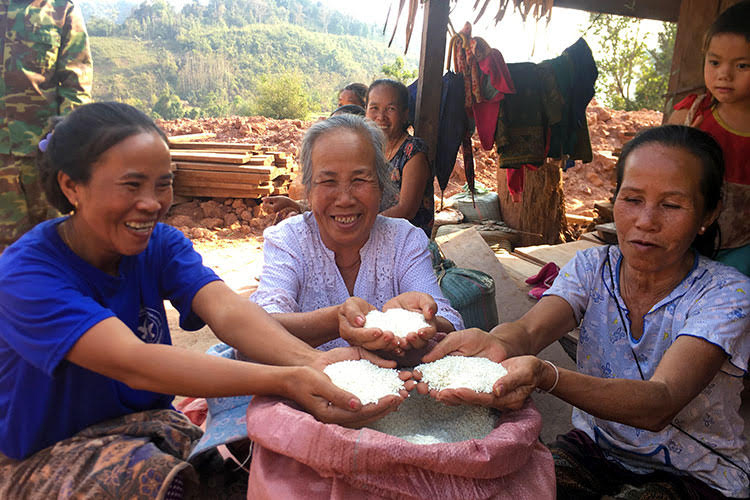 Three women (and a curious onlooker, right) thankful for “life” from Heaven’s Family

If you read Part One of my report about our disaster response in the Southeast Asian country of Laos, you learned how a small, localized natural disaster swept away an entire year’s worth of recently-harvested rice in one night.

Now I want to tell you the rest of the story…

It was on the dusty, bumpy road to Nakhaeng village where my friend Keo first learned that Heaven’s Family helps unbelievers during times of disaster too. With that understanding, we began making plans to help two other villages near Nakhaeng so they could see a demonstration of God’s love for them in the hopes of softening their hearts for the gospel. I even suggested picking up several 100-lb bags of rice along the way as an immediate offer of hope.

No, Keo said, we must follow protocols—that meant getting the permission of village chiefs and local government officials. Since Laos is a communist country where Christians are often persecuted, any action that could be interpreted as an overt attempt to win converts might bring persecution on Keo himself. This had to be done carefully.

A few miles ahead we stopped in at a government district office and asked to speak to the official in charge. Thankfully no one was brandishing rifles or handguns, but I still felt a little uneasy. After all, Americans are viewed with distrust in Laos, so why—I figured they would be thinking—would I want to help any remote villages, especially those that are not Christian (they assume all Americans are Christians, so it would stand to reason that I’d be wanting to help just them, perhaps for some anti-government purpose).

The official responded to our request to help the two other villages by pulling out a list of nine villages, in total, that were affected by the flood. Knowing we couldn’t help all nine equally (and it wouldn’t do much good if everyone received just a couple of pounds of rice), we got him to agree to us providing 70% of the relief rice to two villages on his list that lost everything, while the rest would be equally distributed to the others. We invited the official to join us later for dinner so we could work out the details of our plans, then left his office to meet with the Christians we’d already helped in Nakhaeng village.

That evening, as the sun set before us at an outdoor restaurant overlooking the Mekong River, the official made a surprising offer—if we supplied the rice, he would arrange for military trucks to deliver it to all nine villages! I told him Heaven’s Family could provide $9,500 for the project. (It was more than I would have normally chosen to send, but I felt the Lord wanted us to “go big” to make an impact on this man and the villages we would be helping.) Although his every word had to be translated by Keo, I could tell from his face that he was overwhelmed with our generous offer to help the people of his district (it was likely several times what he earns in a year).

I returned home and had the funds sent, and Keo got to work. For that much rice he was able to negotiate a very good price, but had to go to two wholesalers to purchase what amounted to 40 tons! 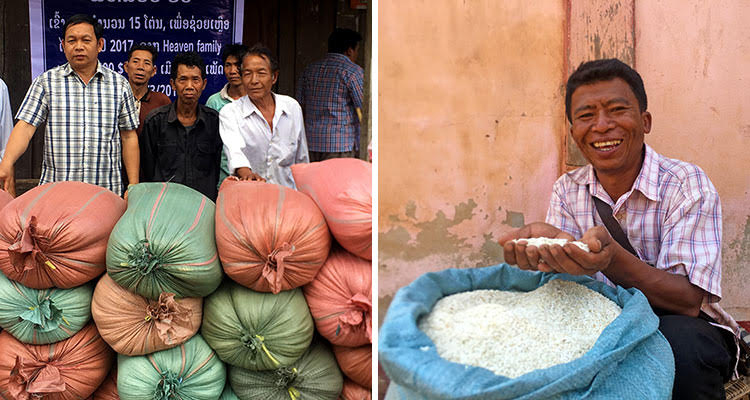 At left, one of nine villages we helped with rice; at right, Mr. Seub from Donexai village said, “Thank you very much for giving us rice, now we are not going to die.”

The reports I received afterwards from Keo were very encouraging. I’m familiar with quotes like those from Mr Seub of Donexai village: “Thank you very much for giving us rice, now we are not going to die,” and the woman who said, “Our hearts are warm and cheer up by your love and your help, we thought that no one cares on our calamity, but we were wrong,” and I never tire of hearing such expressions of gratitude.

But what I didn’t expect was this report from Keo:

“When I brought the rice to the office of government they were surprised of number of rice I brought. When they knew the amount of funds which donated by HF and experienced the quantity of rice which came to their office, one officer said to me: ‘We all amaze with number of rice which you brought, the vice governor said this man does not get anything for himself from this grant, but spent all to the rice.”

Wow, I thought, this is turning out even better than I could have imagined! You see, this project turned out to be a big WIN for the people of those nine villages. Starvation was averted in some cases, and many learned that Christians cared about their plight. It was a big WIN for the government officials, too, who got to play a part in helping the people of their district “on our coat tails.” And most importantly, for the sake of eternity, this was a huge WIN for Jesus’ kingdom! That’s because Keo received great respect and favor from government officials, who now know he is a man of integrity who cares for all people, not just Christians. He’s also earned the gratitude of nine village chiefs and their people, which will give Keo, a man of God with the heart of a pastor and evangelist, opportunities to share the gospel in the weeks and months ahead. It’s also paved the way for Heaven’s Family to do more in the future, and that’s good news for our Human Trafficking & Slavery Ministry and Micro-Loan Ministry, which have already begun working with Keo to help lift the poor in that region.

A win-win-win outcome. God got a lot of mileage out of that relatively small disaster, and I’ve been thrilled to play a part in it. This was another reminder that small can be big in the kingdom of God. Thanks to all who made these inroads possible for our Savior through your partnership with the Disaster Relief Ministry. You are making a difference!

Some of the children I met in Nakhaeng village 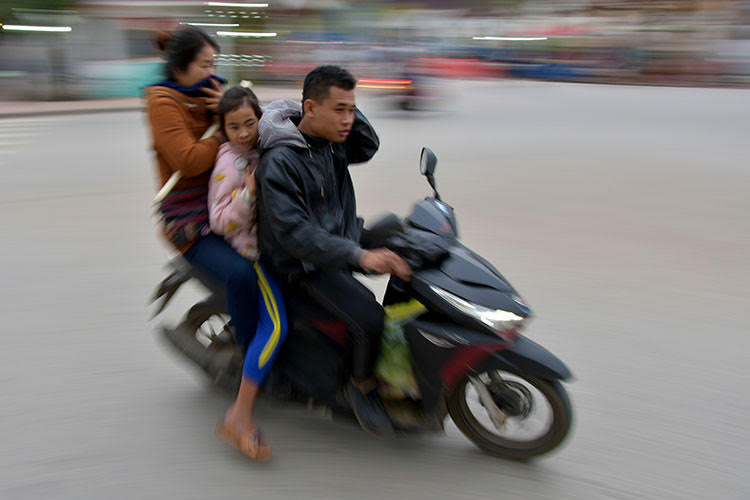 An interesting photo of a family on their motorbike, captured as they whisked past me one evening in the city of Luang Prabang 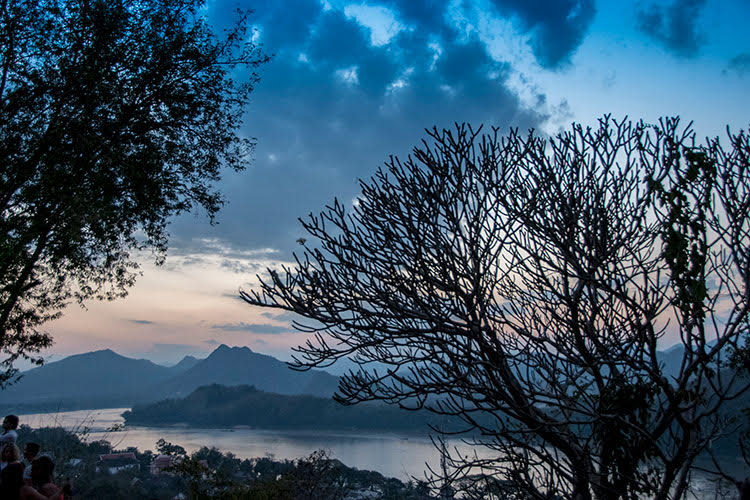 The Mekong River after sunset

The Little Disaster that Could
Volcanic Crisis in Guatemala