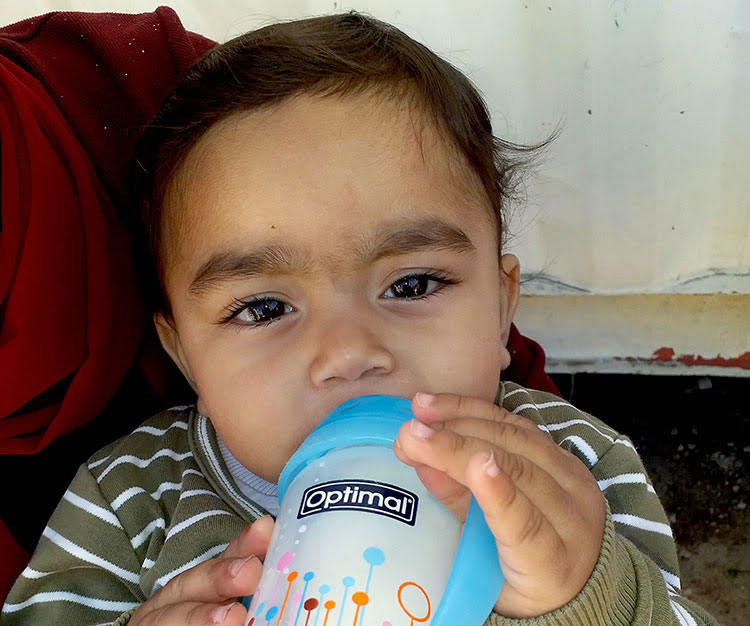 Baby Ali gulping down some nutritious formula, thanks to you!

Baby Ali’s parents fled Syria a couple years ago when ISIS began to attack close to their home. They had no choice but to leave their land, home, job, and possessions all behind. They made the intense journey through the mountains and into Lebanon.

Since arriving in Lebanon, the family has lived in a tent in a refugee camp. They have hopes and dreams of the war ending someday so that they can return home, but right now, that isn’t the case.

Ali was born after the family reached Lebanon. Ali’s mother is unable to breastfeed him, and because no jobs are available for refugees, she can’t afford formula. Instead, she feeds him whatever she can get as donations. Thus he is malnourished.

Ali’s mother has prayed to God for health and a future for her son. Your Compassion Club gift is answering her cry for help—it will provide Ali with formula for a whole year. Even better, it will do the same for four other babies whose parents are also refugees living in Lebanon.

The other four refugee babies in Lebanon who are now receiving nutritious formula, thanks to you!

Thank you so much for making a difference in the lives of these five babies through the Compassion Club.