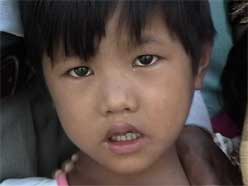 I don’t think I’ve ever felt that I was in a more remote place as when I was in northern Myanmar, formerly known as Burma, in Southeast Asia. My two-week trip there in December was marked by the constant friendly stares of people who acted as if they had never seen a person with white skin. I think that is due, in part, to the policies of the Myanmar military government that keep its citizens isolated from western television and the internet, which isn’t so bad. (This is not to say that Myanmar is a bastion of righteousness. It has been, until recently, the world’s largest producer of opium, and is now second only to Afghanistan.) In any case, I used my white skin for the furthering of God’s kingdom. As with most Asians, the beautiful tanned-skin people of Myanmar are convinced that white skin and big noses are the most beautiful! I was jealous of their little noses and tan skin and they were jealous of my big nose and white skin!

I had the privilege of teaching about 70 pastors, including some national missionaries to India and China, for four days. Although Myanmar is predominately Buddhist, a northern ethnic group known as the Chin people were greatly impacted years ago by Baptist missionaries, and the majority in that region consider themselves Christian. We were among the Chin. But nominalism prevails, and so I had a timely message to share with pastors who are frustrated because of the lukewarmness of their congregations. They asked for more, and I hope to return again in late 2003. This is the only place in the world where I have worn a skirt while teaching, the typical wrap-around garment that Burmese men wear known as the longi!

One thing I enjoy very much about ministering in the Third World is the childlike innocence of adults who have never been exposed to the sophisticated sin of the rest of the world. What a blessing it was to look at a sea of people each evening at the crusade, people who sat directly on the ground for hours, listening with rapt attention. They would laugh at the simplest forms of humor, just like little children. They were so polite that all of them lifted their hands at every night’s invitation to receive Christ. (That is part of the reason that evangelists often report so many people being saved!) I was given the chance one night at the crusade to teach five thousand Chin people part of an American worship song, complete with some hand movements. It was fun.

The picture below is of some children at an orphanage I visited that is run by believers. The orphanage these boys live in is a small one-room house made of planks, along with 22 other children who sleep on the same floor where they also have school and eat their meals. The orphanage’s director and his wife sleep in the same small room behind a curtain. Most of the children’s parents died of malaria or dysentery. Because of the kindness of a Chin man, I had the privilege of giving most of those children their first ride on a motor scooter. Because of your kindness, Shepherd Serve Ministries had the privilege of providing two weeks of the full expenses for three orphanages consisting of a total of almost 100 kids. That was 300 dollars. Thanks. I’m looking forward to the day when the humanitarian arm of Shepherd Serve will be enabled to drill wells, buy seed, provide micro loans, and assist orphanages in many poor places. I also look forward to the time when everyone who receives this letter can join me on a life-changing trip overseas. You will never be the same. Let me know how soon you can go with me.

I was able to give away about 20 copies of The Great Gospel Deception to English-reading pastors while in Myanmar, and the leader of the host ministry there has requested permission to translate it and print 3,000 copies to give to every pastor in the entire country. He really believes God will use it to be a catalyst to revival. I’ve committed the $2,704 that it will take (just 90¢ a copy), and if God lays it on your heart to help toward that goal, that would be great. 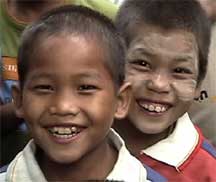 Our new website, www.shepherdserve.org, has received over 500 visits since its debut November 1st. We’ve had visitors from many far-away places, such as Mali, Kenya, Nicaragua, Canada, Seychelles Islands, Saudi Arabia, Canada, Mexico, U.K., and Finland. And we’ve heard from some
nice people in the U.S., including a very kind Presbyterian pastor from Tennessee who wrote, “I think your discussion of Calvinism is the most powerful refutation of Calvinism that I have ever read.” Wow!