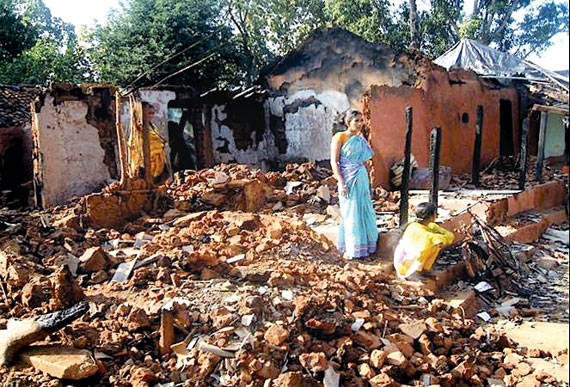 Two women in Orissa, India, visit what remains of their home after it was destroyed in a wave of persecution against Christians by Hindu radicals

Hardcore Muslim. That aptly described “Shaheem,” a respected Islamic scholar and imam of a prestigious mosque and college in India. That was, however, before he failed at an assigned task to win back to Islam a convert to Christ. After their long debates, Shaheem the imam became Shaheem the follower of Christ. And so he was baptized—a potential death-sentence for those who turn away from Islam. Through our Persecuted Christians Fund, Heaven’s Family helped relocate Shaheem to another country where he could be safe, attend Bible school, and prepare for ministry.

Jesus promised that His followers would be hated and even killed for their faith. In 2014, that became increasingly evident as barbaric ISIS jihadists marched across Iraq and Syria, taking the lives of Christians and moderate Muslims.

Heaven’s Family continued standing with our suffering brothers and sisters around the world in 2014, providing relief and, if necessary, relocation, as well as biblical training to take the gospel of peace to their persecutors, particularly in the Muslim world.

Thanks to your contributions, in 2014 we served in 7 nations where following Christ can be very costly. Those include:

• Pakistan, where we met basic needs of persecuted believers

• Afghanistan, where we provided Christians with discipleship training and economic development

• Iran, where we enabled believers to meet secretly in fellowship, discipleship, and baptism meetings

• Laos, where we served Khmu believers oppressed by hostile neighbors and their own government

• The Myanmar-Thailand border, where Karen believers benefitted through education, training, and provision of vital needs

• India, where we rebuilt Christian homes damaged by radical Hindus, equipped Muslim converts and Christian students to effectively minister in Muslim communities throughout the nation, and helped believers distribute Christian literature to Muslims.

Thank you on behalf of our persecuted spiritual family in 2014, and thanks to those who will stand with us again in 2015!