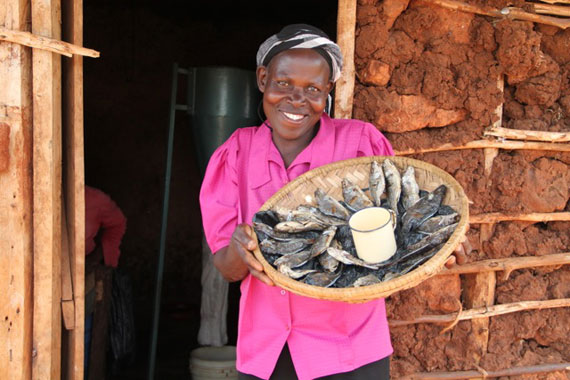 Margaret, a widow and mother of 6, has a successful business selling fish and maize to support her family because of a Heaven’s Family micro-loan made through the Widows & Abandoned Women Fund

In 2014, I discovered a large group of women who were hidden all over the world.

Traveling in poor nations as director of Heaven’s Family’s Christian Widows Fund, I found myself often meeting women who were not widows, but whose husbands had abandoned them. That usually meant that they, along with their children, were left with nothing. And I observed that such women shared the same sufferings as widows. They couldn’t meet their family’s most basic needs. Because they were not widows, however, Christian organizations were ignoring them. Heaven’s Family was one of them.

When your mandate is to care for the “least of these,” there was no need to pray about making a change to our Christian Widows Fund. In July, we changed the fund’s name to the Widows & Abandoned Women Fund. Additionally, we dropped “Christian” from the fund name because we also wanted to serve widows and abandoned women who don’t yet know the Lord, because we know that our service to them can give us an opportunity to soften their hearts to listen to the gospel.

These two new inclusions opened many doors of opportunity last year to serve destitute women in the developing world, and the inclusions were met with gratitude by our partners, who also longed to serve, not just Christian widows, but a broader spectrum of suffering women.

As a result, we helped more women around the world last year than ever before, and did so in ways that are more sustainable than in the past. For example, through your generous contributions, the WAW Fund helped twice as many women than in 2013, and we more than doubled the support delivered through micro-loans and grants for small businesses that provide sustainable income for beneficiaries.

Also, in conjunction with Heaven’s Family’s Micro-Loan Fund, we developed a 2-day business-training seminar to equip borrowers with the skills needed to run successful businesses. Our plan is to expand this training to other borrowers in 2015.

Thank you so very much for your generous support last year, for which women around the world are praising God!