The Unreached People Groups Fund at Work in China Winning members of the world’s unreached people groups to Christ often requires years of searching for cultural keys, plus relationship building and prayer. But sometimes a breakthrough can begin with a miracle. That is just what happened recently in a remote corner of China among an unreached people group known as the A-Che (pronounced “ah-chay”).

Along with some other fellow missionaries to China, I began preaching the gospel among the A-Che almost ten years ago. It has not been easy, to say it mildly. The A-Che’s superstitious nature, coupled with their anti-Christian regional government, have kept the number of A-Che believers to a tiny minority. So strong is the resistance that I was arrested briefly in 2007 for sharing the gospel in their territory. After that, we shifted our strategy to discipling our few existing A-Che converts.

Late last year, however, God did something that we could never have done ourselves. It was a breakthrough for which we’ve prayed. He touched an A-Che woman named Yang Mei Pan.

Chronically ill for ten years, Yang suffered extreme tiredness and stomach pain, and she often had difficulty breathing, feeling as if she was being choked. She tried everything she thought might help—superstitious rituals, witchdoctors, and medical doctors. Thousands of dollars later, she was no better off—in fact, her suffering had increased.

Yang remembered a distant relative who had recently believed in Jesus. She had heard stories of people being healed. Maybe this Jesus can heal me, she thought.

Yang’s husband agreed to drive her to her relative’s church that was three hours away (and the closest church to their village). That drive turned out to be a three-hour spiritual battle.

Turn around and go home! Yang found herself repeatedly telling her husband. She knew, however, that they were not her words, but those of something inside her. As the two got closer to their destination, the voices became more frantic, and even threatening. Yang’s husband, although not a believer, was so desperate to help his suffering wife that he ignored the voices and pressed on.

That night Yang repented and believed in Jesus, and she was delivered from her demons. Her health improved almost immediately, and now most of her symptoms are gone.

Yang is a living testimony of Jesus’ love and power. She and several others from among the A-Che are now being discipled by our co-laborers in China, and Yang is excited about reaching her own people. Pray with me that the A-Che will one day no longer be considered an unreached people group, but one that is reached with the gospel—by the power of God. 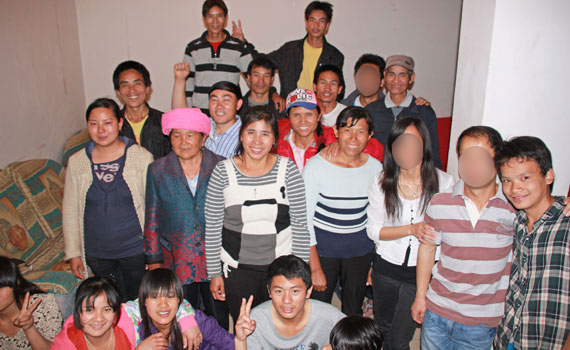 Attendees at one of our Bible trainings that included not only six A-Che believers, but also five from the Lipo and eight from the Han Yi people groups, two other unreached tribes in China

At a recent baptism of new A-Che believers

Some of the beautiful faces of the A-Che, a people whom Jesus died to save. (The man at right is playing a traditional wind instrument.)

Reaching the unreached was the priority of Jesus and the writers of the New Testament (see Matthew 24:14; 28:18-20), and it is ours as well. There are hundreds of ethnic groups in China that are currently unreached with the gospel. Sister Yang’s tribe, the A-Che, as well as the Ha Ni and Yi peoples, also of China, are the initial focus of Heaven’s Family’s Unreached People Groups Fund. Your contributions to this fund make you an invested partner in reaching precious people for whom Jesus died. Thanks so much.