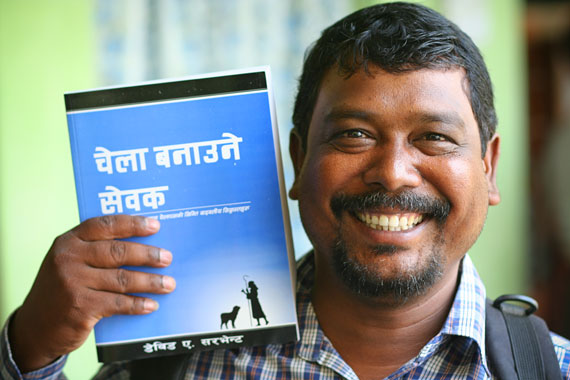 That’s Arabic for The Disciple-Making Minister, the title of one of the books written by Heaven’s Family’s founder and director, David Servant.

Based on questions he received from pastors during years of conducting pastors’ conferences around the world, David wrote The Disciple-Making Minister with Christian leaders in mind who have had little opportunity to receive Bible training.

Sadly, many Christian leaders in poor countries are being seduced by unbalanced and misleading television preachers who broadcast internationally. Those Christian leaders subsequently become the proverbial “blind leading the blind,” to borrow Jesus’ expression. The Disciple-Making Minister helps Christian leaders to reclaim their biblical calling to make disciples who obey all of Jesus’ commandments. Its 500 pages cover many topics relevant to Christian ministry.

Last year’s completion of the Arabic translation of TDMM brings the total number of language translations to 32. We’ve translated TDMM into languages you may never have heard of, such as Hindi, Bengali, Malayalam, Oriya, Tamil, Telugu and Mizo, all widely spoken in India.

But we’ve done more than just translate TDMM. Tens of thousands of copies have been printed and distributed around the world over the past 11 years. Some translations, such as Spanish, have been printed in multiple countries, such as Mexico, Cuba, Peru and the Dominican Republic.

In addition to printing and distributing TDMM, we also post translations at Heaven’s Family’s teaching website, ShepherdServe.org. In 2014, our site received about 150,000 visits from visitors who speak languages other than English, mostly to read one of our TDMM translations. Moreover, we had visits to our website from every country in the world except two—North Korea and Western Sahara! We’re especially excited about our most recent translation—Arabic—as this will be an invaluable resource to many new converts to Christ in the Muslim world.

Our Books for Discipleship Fund is quietly touching lives and helping to build God’s kingdom around the globe. Thanks for making all that blessing possible!