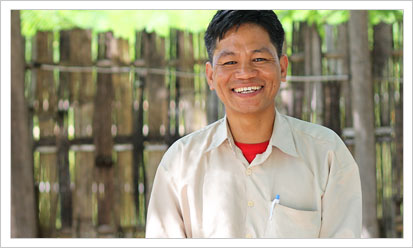 In the minds of many rural Burmese people, nats are everywhere. I’m not speaking of the insects that we refer to as gnats, but to spirits that allegedly inhabit trees, rocks, mountains and lakes—spirits that are flawed, possess immoral desires, and that need to be regularly appeased by the offerings of fearful worshippers.

During annual festivals, nats are thought to possess trance-dancing mediums, a role that is increasingly performed by transgendered gay men and transvestites. People come from miles around to participate in those festivals—to drink themselves drunk on palm wine and dance wildly to loud music in fits of ecstasy—with hopes of also experiencing nat possession. Contrary to common perceptions, rural Burma is not Eden before the Fall.

When I was in Myanmar in November, I met a former nat worshipper. His name is Stephen Paing Bu, and he is now a Christian missionary who is supported every month through Heaven’s Family‘s National Missionary Partnership. Consecrated at age 10 by his grandfather to be a nat teacher and “prayer man,” Stephen became increasingly entrenched in nat beliefs and practices under the approving eyes of his family. 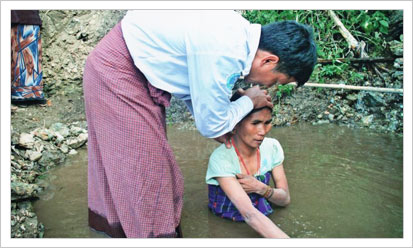 Stephen baptizing one of his converts

But then Stephen heard about Jesus from a missionary who was preaching the gospel at a nearby village. Although forbidden by his grandfather to have any further contact with that missionary, Stephen secretly met with him to ask questions about the God who created the universe and His Son who, by paying for our sins, offers us eternal life. At age 14, Stephen believed and was born again.

His transformation began immediately: “My heart was burning like fire with the love of God and the burden of sharing the good news with other people,” he told me. A few years later Stephen attended Bible school and then entered full-time ministry in 2002. “The power of God was so real as sick people, drunkards, and broken families repented and turned to God,” he said. Stephen married in 2003, and soon his wife bore them a son.

But the “worries of the world” began to “choke the word” (Mark 4:19). Stephen told me that in 2006 he found himself facing a financial crisis:

I stopped my ministry for 2 years. I believed that since I wasn’t receiving any salary or support, that I needed to stop my ministry and provide for my family, so I started farming and gardening. However, God was wanting me to continue in the ministry but I disobeyed and stopped. During this time, my body was filled with continuous sickness and my family members were also sick. And my farm was not yielding produce. I was in a much worse situation than before.

One night, the Holy Spirit flooded our bedroom with a great light, brighter than the daytime. My heart was filled with a supernatural joy. I cannot describe the feeling. I stood up out of bed and shouted with a joyful heart. My wife and son were startled and also woke up. We praised God all night long, shouting “Hallelujah!” again and again.

My faith was revived and the powerful work of the Holy Spirit overwhelmed my heart. I sought the Lord through fasting and prayer for 21 days, studying the Word of God. I was filled with new strength and energy, spiritually and physically. The sicknesses left my body.

Since then, Stephen has been faithfully spreading the gospel among those who fear and worship the nats as he once did, making disciples of those who repent and believe in Jesus. Stephen told me,

I praise God that by His grace there have been a total of 96 people who have confessed, believed, and baptized by my hands. Last year, 2012, there were 34 people who converted and received baptism. 2012 has been the most fruitful year of my life!

His monthly sponsors, who live in Texas, Florida and California, have the privilege of sharing in Stephen’s every victory. To learn how you can partner with Stephen or another national missionary like him, see “A Note from Jody” below. 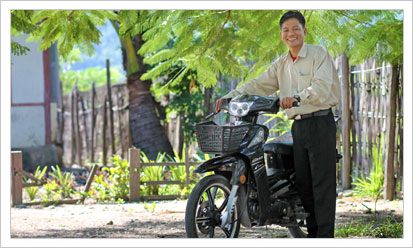 Stephen Paing Bu, a Heaven’s Family-supported national missionary,
with his new motorbike that will enable him to reach many more with the gospel

Although Stephen is blessed with three sponsors who collectively support his ministry with $100 per month, he could use one more sponsor who could provide just another $20 a month. Would you consider linking your life with him or another qualified national missionary? Visit our recently-updated National Missionary Fund page and see all of the missionaries who currently need partners.

Help further the gospel by supporting the work of national missionaries