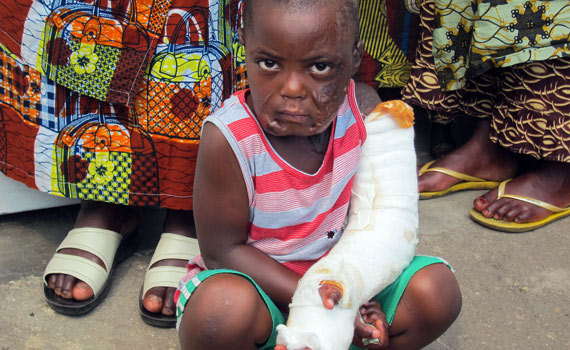 One morning Judith left her two-year-old daughter LaRosa with a neighbor while she ran some errands in nearby Goma, the civil-war-torn capital of the Democratic Republic of Congo.

While Judith was gone, a terrible accident happened—LaRosa suddenly came running and screaming out of the babysitting neighbor’s house with her head, hair and clothes on fire. Another neighbor extinguished the fire and carried LaRosa to the hospital, less than half a mile away.

Although the details about LaRosa’s accident remain unclear, Judith says she is thankful that the Lord spared her daughter’s life, and she has forgiven her neighbor for not watching LaRosa more closely. And, as evidence of God’s favor, the hospital waived the charges for LaRosa’s initial treatment, which greatly encouraged Judith.

Little LaRosa now faces years of restorative treatments. Judith says she is placing her daughter’s care in God’s hands, and is trusting that He will supply their every need on LaRosa’s long road to recovery.

LaRosa recently had her left elbow separated from her side, where scar tissue had fused them together. Her doctor anticipates the following treatments:

3.) At a larger hospital, eventual cosmetic surgery on LaRosa’s face and neck.

Through our Critical Medical Needs Fund, we’ll be walking right beside LaRosa on her challenging road to recovery.