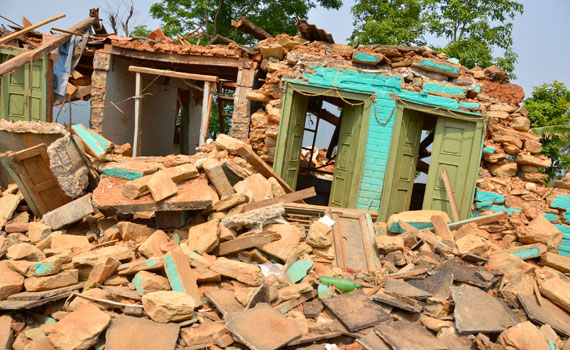 An all-too familiar sight in Nepal

Entire villages destroyed, my contact said in an email to me just days after the April 25th earthquake in Nepal. I wouldn’t have believed it if I hadn’t seen it with my own eyes.

Two days later I slipped “unseen” into the capital city of Kathmandu—larger organizations, I learned, found themselves mired in bureaucratic red tape at the airport as they tried to get their teams and supplies into the country. I met with trusted Heaven’s Family partners who knew where we could go to reach some of those not being helped by anyone else, and then made a plan to navigate the chaotic conditions to reach them.

Passing through the dusty, crowded streets of Kathmandu, I saw many buildings during my first full day here that seemed to have escaped damage from the 7.9 magnitude quake. But punctuating what seems to be normal cityscape for this part of the world are buildings that lean eerily, looking ready to topple if a few pigeons alight on their roofs, while other buildings appear to have been mauled by a Godzilla-like monster that has ripped gaping holes in them, allowing their guts to spill out. Worse are the shapeless mounds of rubble that now stand vigil where buildings once did—many of which still contain the remains of their hapless occupants. The faint stench of decaying flesh continues to mark their untimely graves. And, I later learned, many of the buildings that appear normal from a distance are in fact riddled with cracks, rendering them unsafe. 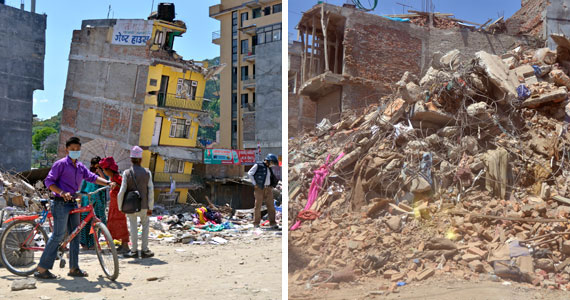 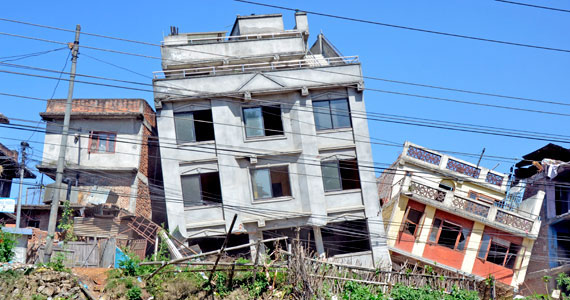 Today we went out of the city into mountain villages. I have come and I have seen it all with my own eyes. And my contact was right.

Unlike the devastating but relatively localized earthquake that rocked Haiti 5 years ago, the one in Nepal affected a massive area covering one third of this mountainous nation. Driving for hours from Kathmandu we’ve passed one leveled village after another. At times I feel like I am in a war zone. People look dazed, not knowing how or where to start rebuilding their lives.

Most of the village homes, which are owned by subsistence farmers who cultivate a patchwork of terraces on incredibly steep slopes, are made of bricks or rocks mortared together with mud. They crumbled without resistance when the quake shook, burying those inside. Most of them died, but I met a few who, although being buried as well, escaped serious injury.

The need in Nepal is difficult to wrap our minds around, but Jesus is helping many of us wrap our hearts around its people. And I’m happy to report that He’s showing us some exciting, strategic ways Heaven’s Family can help. I’ll be telling you more about them in my next blogs. I hope you’ll stay tuned. Until then, here are some photos that will enable you to see through my eyes. 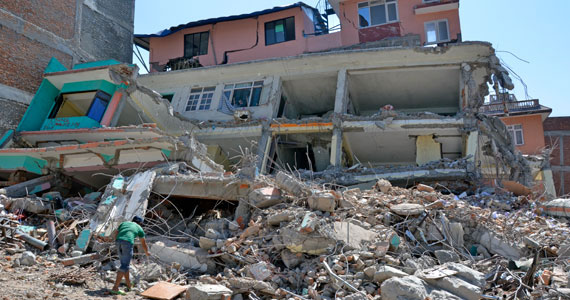 All that is left of a small hotel 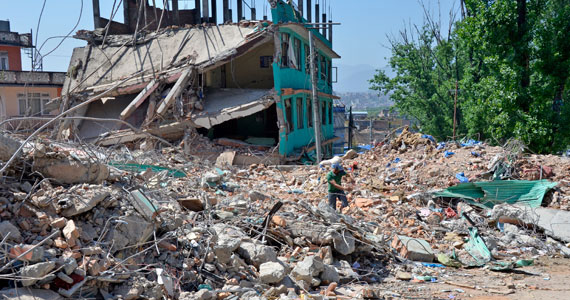 The collapsed building at left in the foreground was a church in service at the time of the earthquake. I’m told that of the 75 or so that were in attendance, 27 were killed. I have to wonder if everyone in the congregation was ready to meet the Lord in that terrible moment (see the parable about the Ten Virgins in Matt. 25). The smell of decaying bodies still lingers. 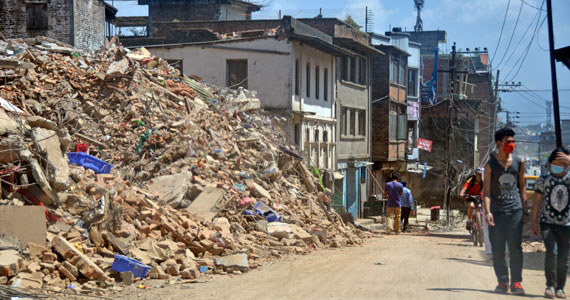 Collapsed buildings in the capital city of Kathmandu form massive piles of debris. 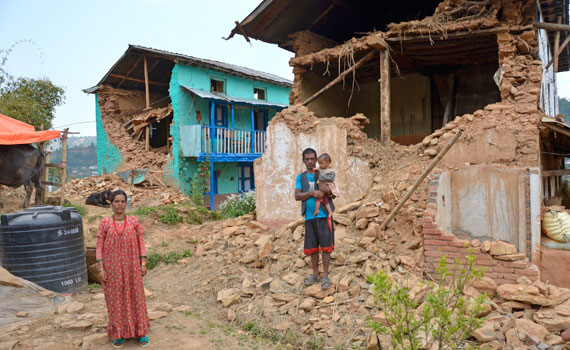 The remains of these homes will eventually be taken apart one rock and wooden beam at a time, then used to rebuild. Many homes, like these, are located high on mountain slopes that can only be reached by narrow foot paths, which means all the work will have to be done by hand. 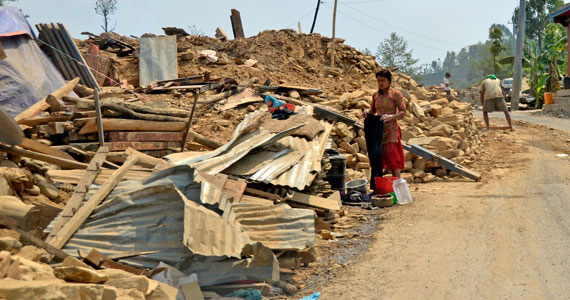 Some collapsed buildings reduced the road to a single lane 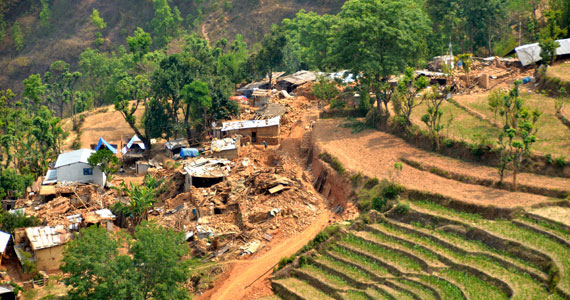 This final photo shows a bird’s-eye view of how a typical village has been affected—one or two buildings are left standing while most collapsed. Note the terraced farmland, which can be seen all over this part of Nepal. On these small plots they plant a lot of wheat, but also potatoes, corn, cabbage and other vegetables.

I’m so grateful for the contributions many have made to Nepal relief through the Disaster Relief Fund. I’ve been encouraged when I see the look of hope on the faces of the Nepalese whom I meet, and I feel confident that together we’ll make a difference there. I thank you on their behalf, and ask you to please pray for the miracles that they need so desperately.

This blog contains much sad news, so I want to end on a happy note, which is not difficult to do when looking into the faces of precious children! 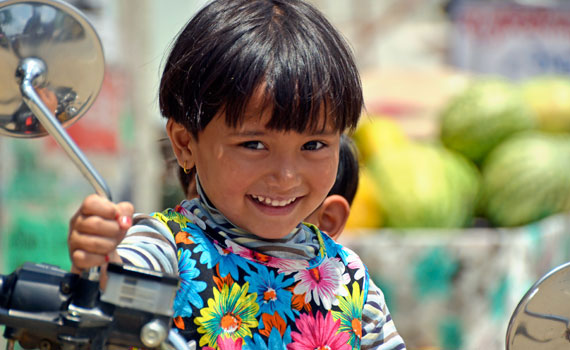 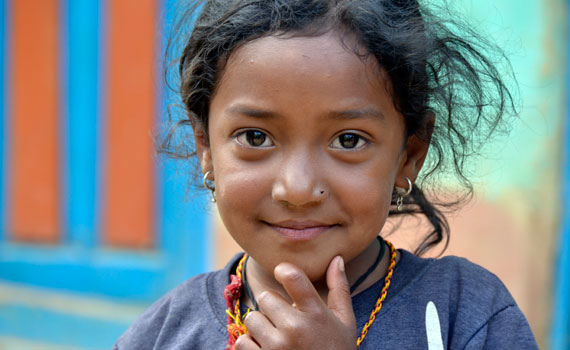