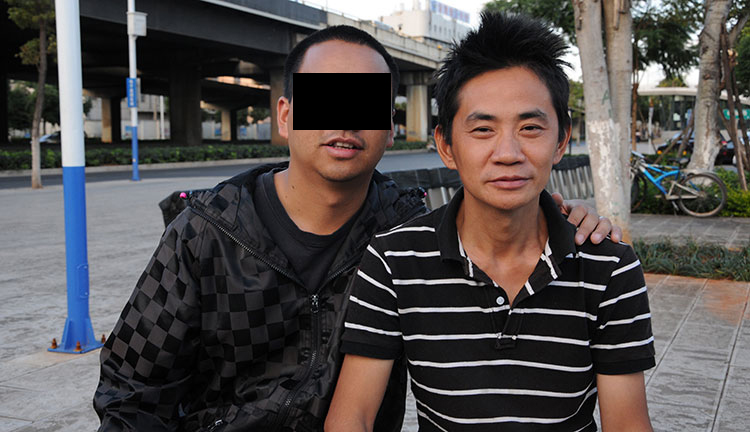 Timothy Yang, at left, with Chen Feng—two men whose lives have been radically changed by Jesus Christ

The meet is on the street! This common missions phrase, made popular by a well-known evangelist, accurately depicts where the heart of the Unreached People Groups Ministry (UPGM) is at. We believe that in order to reach people, we need to meet them where they’re at—on the streets—working up-close and personal with those who the world might even say are unreachable.

Today I want to tell you about one such meeting. For several years the UPGM has led an inner-city outreach where we hold church services that literally meet on the street behind a busy subway station in China. And we have seen, first-hand, the power of boldly sharing the truth of God’s word in a public place; and the fruit of our labor is plenty!

On average, around 45 individuals meet us on the street each week, not including those who pass by and stop to listen, those who live nearby, or those who are simply attracted by a large crowd. Everyone who passes by or stops to listen is approached by a team member who offers to pray with them, and then shares the gospel and gives them Christian literature. Often times, those who stop to listen will return for a second, third and fourth time, often resulting in their salvation and regular attendance. Many of the individuals we minister to are unemployed workers and homeless adults who are struggling to just survive.

One such individual is Chen Feng, a 37-year-old man from China’s Sichuan province who had travelled to the city in the hopes of pursuing a career. Unfortunately, Chen was unable to land a steady job and ended up living on the streets doing odd jobs here and there, barely making enough to eat. A devout Buddhist and not wanting to displease his family, Chen remained on the streets, losing hope and beginning to believe that this life was his destiny.

But the Lord had other plans! About a year ago one of our team members, our dear brother Timothy Yang—also from the Sichuan province and who was also at one time homeless—met Chen. After sharing his own testimony of how the Lord had brought him from being homeless on the streets to a great inheritance, Timothy invited Chen to attend the UPGM’s street ministry.

Over the following year he heard the message of Jesus and saw both physical and supernatural demonstrations of God’s love. Gradually his heart began to turn from his Buddhist roots, and recently Brother Timothy led him to a confession of Jesus as Lord and Savior—so we are overjoyed to announce that Chen is now a brother in Christ! He is the first person from his family to make such a radical conversion away from Buddhism, and he is so grateful that God has since also provided him with stable work. He loves to pray and spend time in God’s word, and even enjoys helping with the UPGM’s outreach to the homeless.

A small glimpse of the church that meets on the street!

Chen is just one of many people previously unreached whose lives have been radically changed by the redeeming power of Jesus Christ! As we continue to train disciples and leaders, the “least of these” are advancing Jesus’ kingdom! Thank you to those whose prayers and financial support of the Unreached People Groups Ministry enable us to share the gospel and make disciples.