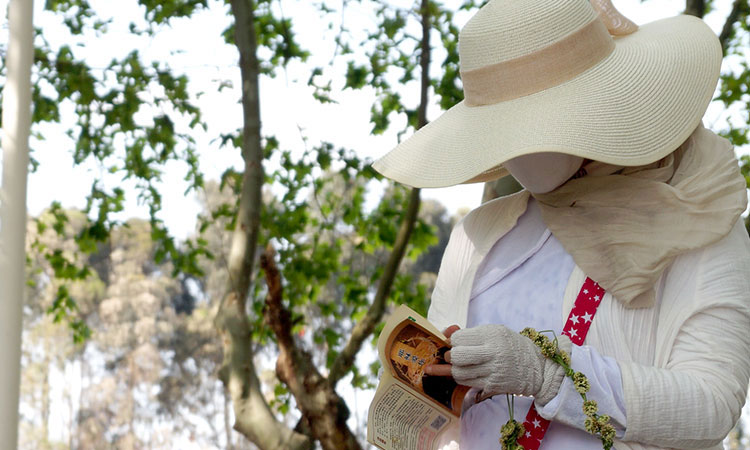 Masked people can be seen all over China’s large cities, usually for skin and lung protection from the harmful contaminates that pollute much of that nation’s air. So when we met the woman in the photo above, we were not taken by surprise—or frightened!

Although I can’t tell you much about this woman, I do know by the rest of her clothing that she’s a Buddhist nun. She represents the unreached world’s idolatry and the first step in our process of reaching the unreached. That’s because 60% of unreached people are engaged in religions that include idol worship (the other 40% are Muslims who worship a false god). As Christopher Wright puts it, “False gods destroy and devour lives, health and resources; they distort and diminish our humanity; they preside over injustice, greed, perversion, cruelty, lust and violence.”

Working with unreached peoples involves three important steps of ministry: evangelism, training and equipping, and church planting. Let me give you a specific example of how we conduct evangelism.

Our team of evangelists, led by Esther Jing, started a conversation with the masked nun in a public park. She introduced her to Jesus, and then after a time handed her a gospel tract. Noticing that part of our team was worshiping while Esther talked with her, the Nun asked if they could sing the song Silent Night (many Chinese hear Christmas songs during the holidays). Esther called another new friend, also a Buddhist, over to the group and they sang Silent Night with our team. Several other people were drawn in by the singing, and were touched and curious as the team continued with other worship songs. Several tracts and even Bibles were given out that day. These two unreached Buddhists had an opportunity to hear about Jesus and even an opportunity to worship an as-yet “unknown god.” While they weren’t willing to follow Jesus that day, they declared emphatically how much they liked singing the Christian songs.

Worship in the park, at left, leads to sharing the gospel and giving out tracts and Bibles to Buddhists, at right!

That was the first step in the process of reaching the unreached—evangelism. Our teams are consistently evangelizing the unreached. We want to see as many unreached people who are stuck in idolatry and the poverty that idolatry creates delivered and worshiping the one true God!

In my next two updates I will focus on the discipleship and training aspects of reaching the unreached and starting house churches.

The investment of prayer and finances in partnership with the Unreached People Groups Ministry is producing fruit for Jesus’ kingdom. Together we are reaching people—even those wearing masks—who might not be reached any other way.

Rumors of Yesu
32 Tribes Worshipping Together