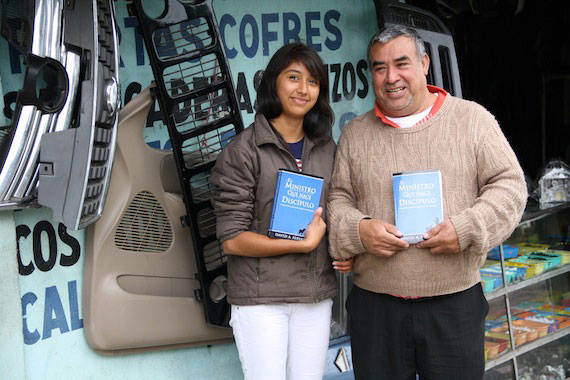 Sergio Hernandez with his daughter, Brenda, holding copies of the “Blue Book” in front of his auto parts store.

I’m so contento [glad] that we had time to alto [stop] today and visit with hermano [brother] Sergio Hernandez, an effervescent auto parts store owner who prefers to spend his tiempo [time] preaching the gospel and planting churches. (Just trying to impress you with my Spanish.)

Sergio is probably our primerio distributor of The Disciple-Making Minister in Mexico. Thanks to the work of missionary Jason Fitzpatrick and HF staff member David Warnock, director of our Teaching Ministry Fund, we’ve printed 2,000 copies of the Spanish translation in Mexico, and most have been distributed to Christian leaders.

During our visit, Sergio told me how he had recently given away 50 copies of the Spanish TDMM at a funeral. I wondered how he pulled that off, and Jason explained. Apparently the funerals of pastors can be well-attended and drawn-out. Proportionate to the length of the service, very little is actually said about the deceased, and the many pastors who attend take turns giving exhortations and sermons. (Pastors are going to love eternity.)

At this particular funeral, six pastors had each testified how the “Blue Book” had altered their thinking and benefited their ministries. Sergio told me that he could not resist standing up to tell all those present that he happened to have 50 copies of the Blue Book in his car! But he told them he could only give them to pastors, and only pastors who would promise to read them. Before long, about 50 lined up. Sergio put the Blue Book in their hands, and the funeral service continued! (To read the original story we wrote about Sergio the Surprising, click here.) 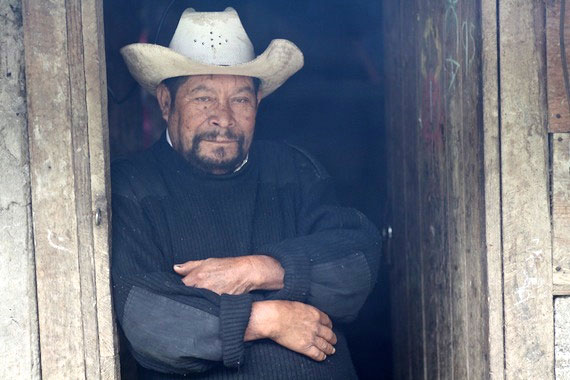 Although this guy looks a little intimidating, he didn’t mind me taking his portrait (I think)