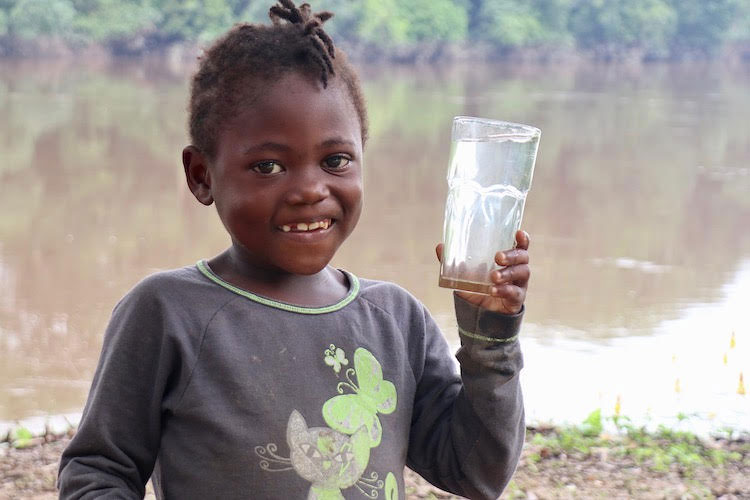 Today I finally reached my first original destination, the small village of Malapa, accessible only via a 30-minute ride in a motorized canoe down the Ngoko River. As our canoe approached Malapa’s riverbank, its citizens were singing and dancing in celebration of our arrival. Just a few months ago, Heaven’s Family’s Safe Water Ministry funded the drilling of a well and installation of a durable hand pump. Before that, the villagers had no option but to drink the muddy, contaminated water of the Ngoko River.

The people of Malapa are members of a tribe known as the Bomwali, of which there are only 9,000 members in the world. They speak a unique language, and they live on either side of the Ngoko River, in Cameroon and Congo, for a stretch of about 100 miles. Until a year ago, they were classified by missions experts as an “Unreached People Group,” because (1) less than 1% of the Bomwali population is Christian, and (2) they had no church or witness among them. That changed, however, when a Cameroonian missionary named Leo, whom I met at a conference in Kenya in March, started reaching out to them with a strategy to make disciples who multiply. Leo has planted five disciple-making churches among the Bomwali in the last year, one of which is in Malapa.

The Bomwali people all live in the jungle interior during the 4-month annual rainy season, where they grow cocoa beans, and when small streams are following from which they can drink. But during the other 8 months of the year, when the interior streams all dry up, they migrate to the river banks of the Ngoko River, which becomes their sole water source.

I filmed a few interviews with Malapians, and it required two translators: English-to-French, and then French-to-Bomwali. During those interviews, I heard similar stories repeated. Before Heaven’s Family’s water well, diarrhea, dysentery, and itchy skin (from bathing in the Ngoko water), were common. Typhoid Fever was also mentioned. But now those problems have all but disappeared. Naturally, everyone is ecstatic. And I was struck, once again, how I take abundant, safe water for granted. The Bomwali people are among the earth’s poorest. They live in dirt-floor wooden shacks that you and I might not consider adequate to house our animals. But the believers in Malapa are thanking Jesus for safe, clean water.

Leo told me that, because of the new well and new church, the people of Malapa are no longer migrating between the jungle interior and the riverbank. They will now permanently reside in their riverbank village—unlike all the other Bomwali people who live in small settlements along the Ngoko River.

There are some obvious signs that God’s time has come for the Bomwali people, one of which was a recent declaration by the Bomwali Chief, who was with us all today, officially dedicating all the Bomwali to God. He sees unmistakable indications that God is trying to bless his tribe. The door is now wide open, and a disciple-making movement is in its infancy, but underway. Heaven’s Family will be involved, and tomorrow, I’ll be traveling a considerable distance further down the Ngoko River to visit two other Bomwali villages to consider potential well projects there. That journey will be the subject of my final blog.

Below are some photos, with captions, from the day. 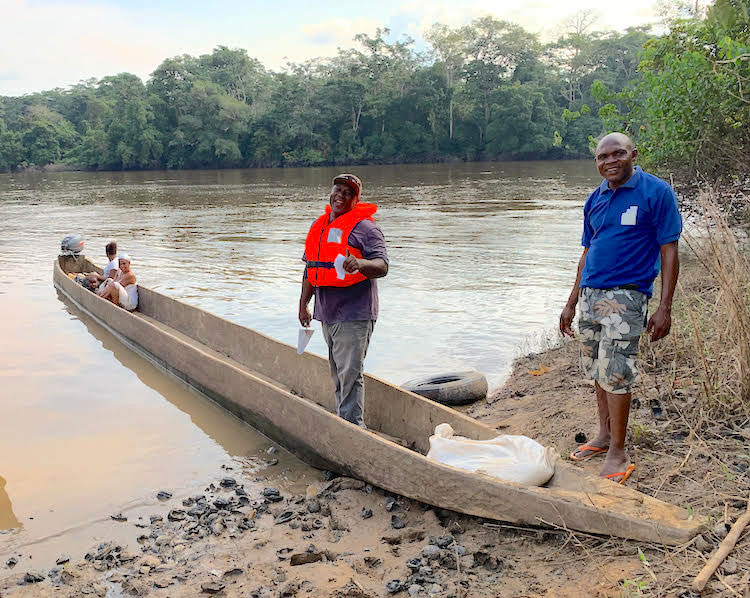 Here’s our transportation to Malapa. That is missionary Leo wearing the life jacket (he doesn’t swim), and the other person is Bien Aime’, chief of all the Bomwali people. 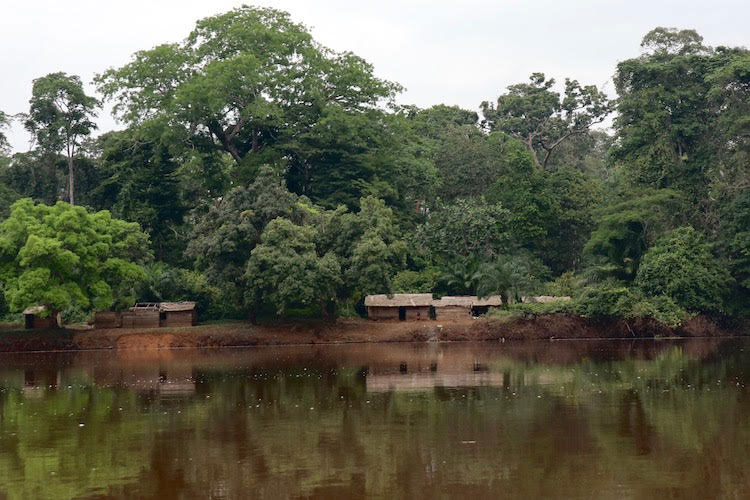 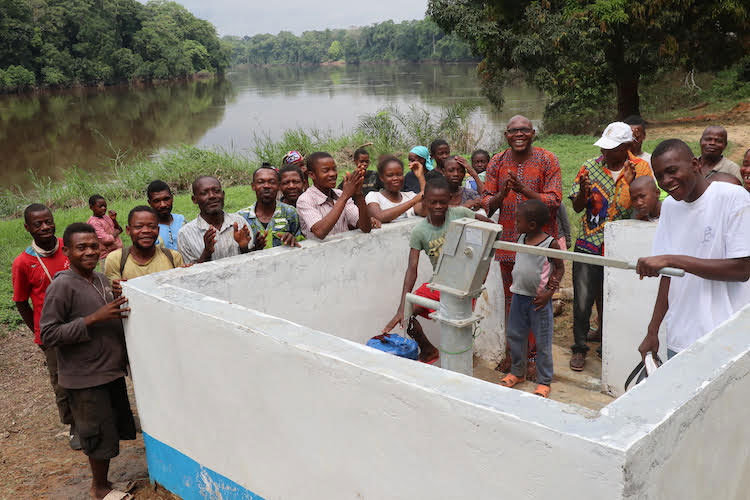 A few happy Malapians gathered around their new well 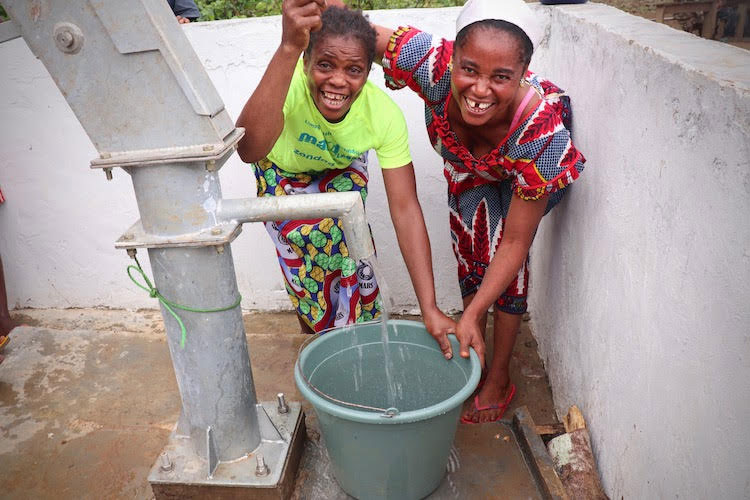 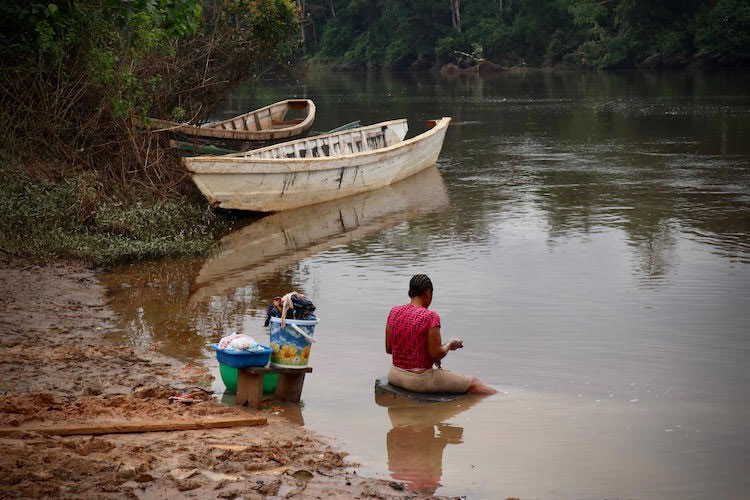 This is how clothes are washed by all the Bomwali people, with the exception of those who live in Malapa. They now use clean well water. 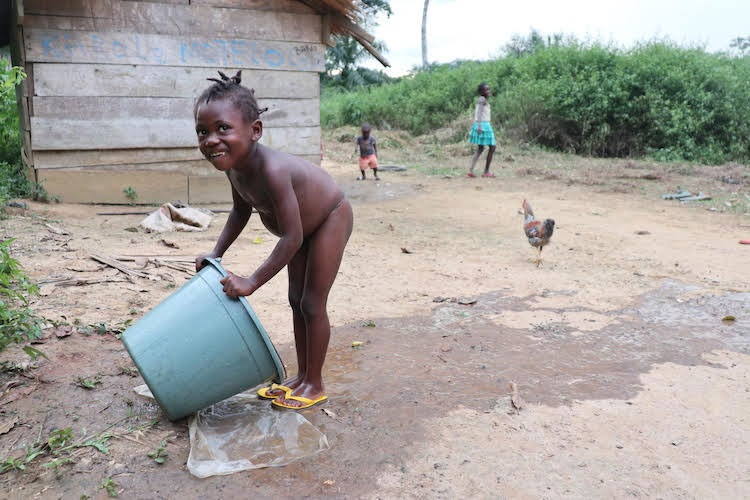 And this is how people bathe in Malapa. At least now the Bomwali bathing water won’t cause their skin to itch. 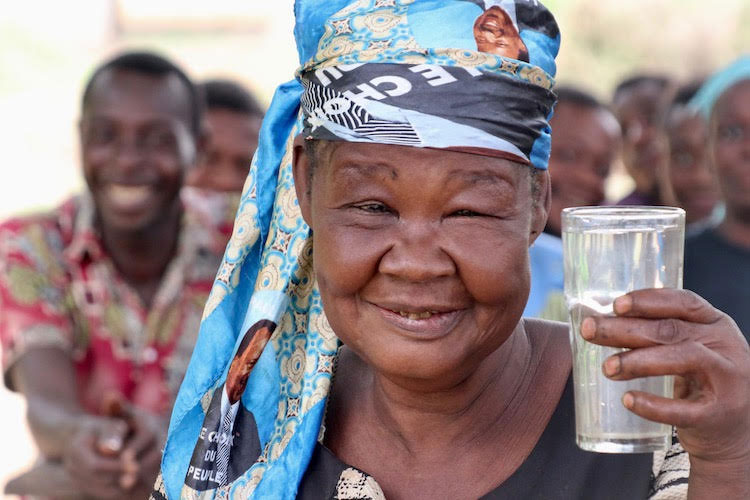 In order to show the contrast between the old water and the new water, I requested two transparent glass cups, but we could only find one among Malapa’s 50 residents. So I finally got the idea to take photos of Malapians holding a glass full of new well water with the muddy river in the background. Which is part of the reason the photo below became my favorite of the day. 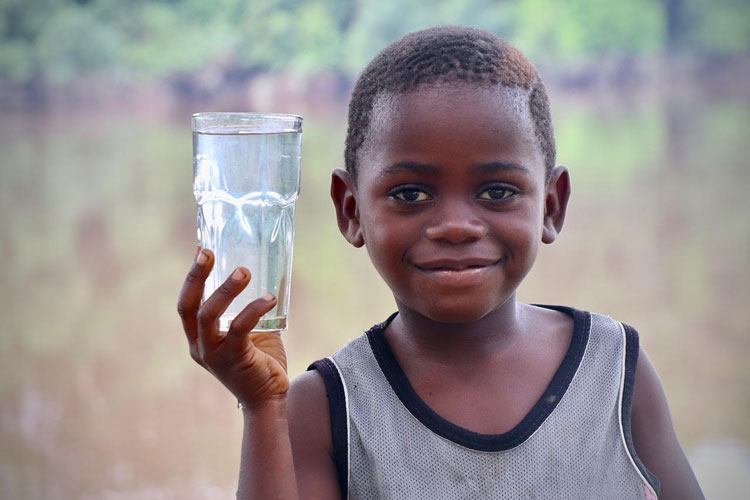 This photo really tells the story.