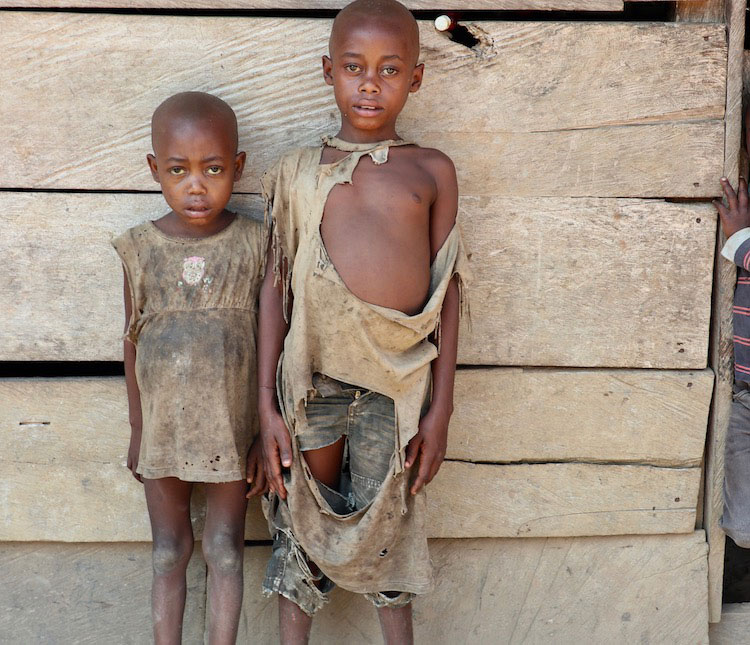 This photo gives you some idea of the poverty suffered by the people of Mpembe. These children are wearing what they wear every day. They don’t go to school, as there are no schools they can go to.

Today our motorized canoe took us on a two-hour trip downriver, all along a stretch of the Ngkoko where Bomwali people live in small, scattered settlements. During Colonial times, their ancestors fled from their ancestral home village in Congo to escape capture and slavery by European settlers, and they adapted to the isolated life that still characterizes them today. That isolation has kept them beyond the reach of the gospel—until just recently.

As our canoe plowed through muddy waters of the Ngoko, we passed many tiny Bomwali settlements perched on the riverbank among massive, ancient trees. I felt a mixture of sadness and joy…sadness thinking about how long the Bomwali have lived in ignorance of the gospel, and joy that some are finally hearing it.

We arrived, along with the Bomwali chief, at the village of Mpembe, to singing and dancing. They were very glad to see us. I later learned that this was the very first time the chief had stepped foot in Mpembe, due to some animosity towards him by the villagers. (I’m unsure who are Democrats and who are Republicans.) But the potential for safe water has had a mending effect.

The Mpembe villagers wanted to hear from me, and my short speech was first translated into French, and then the French was translated into Bomwali. I told them that I was happy that Heaven’s Family had been able to fund a water well up river in Malapa, and that we hoped to do the same in Mpembe. However, I told them that I could make no promises, because everything depends on Heaven’s Family getting funding. But I told them that there were two things that they could do that would increase our chances of getting funding: (1) allow me to film interviews with three of their citizens regarding their current situation that I could use to appeal to potential donors, and (2) repent of their sins and believe in Jesus, because He is more likely to bless them if they belong to Him.

So we proceeded to film three interviews. I asked all three of the women whom I interviewed if there was anything else they desired other than a water well. All three said they wished for a church in their village! They’ve heard that five churches have been started amongst the Bomwali in other villages. Before we left, Leo, the Cameroonian missionary who is targeting the Bomwali, shared the gospel to a circle of about 15 of Mpembe’s citizens and then lead them in a prayer of salvation.

We made a similar stop at another village named Mokoulounou. A water well there would serve several hundred Bomwali people.

Below are some photos from the day with captions. Thanks so much for joining me on this journey! 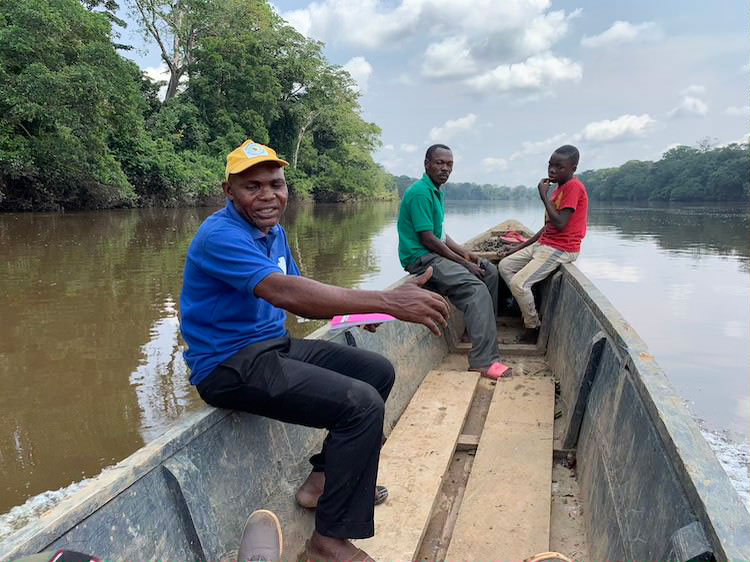 I spent 4.5 hours in this canoe today, traveling to and from Mpembe. That is chief Bien Amie’ in the blue shirt, chief-for-life of all 9,000 Bomwali people. In the green shirt is a Bomwali church planter named Charles. 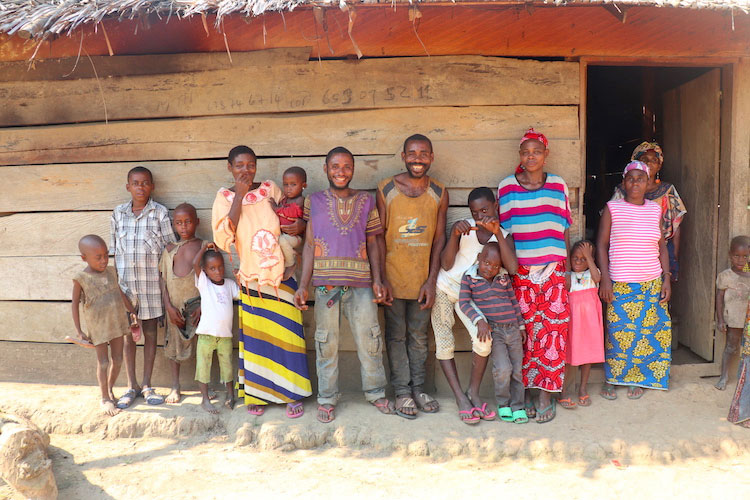 Some of the 50-or-so citizens of Mpembe 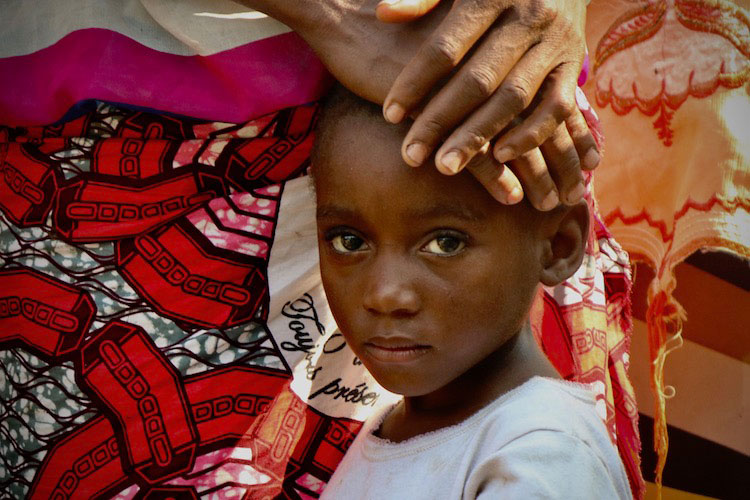 One of Jesus’ people in Mpembe 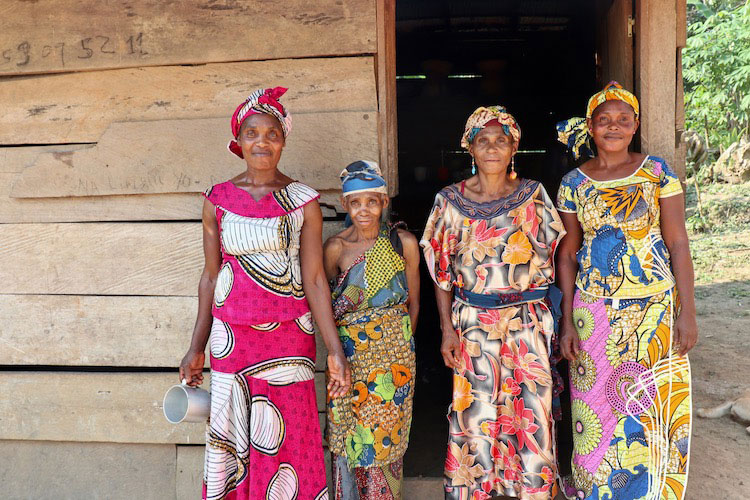 I chose to film interviews with the three taller women in this photo because of the brightness of their dresses (adds interest!). The Bomwali do participate in Cameroon’s economy by growing and selling cocoa beans. My observation was that women’s dresses were an economic priority. 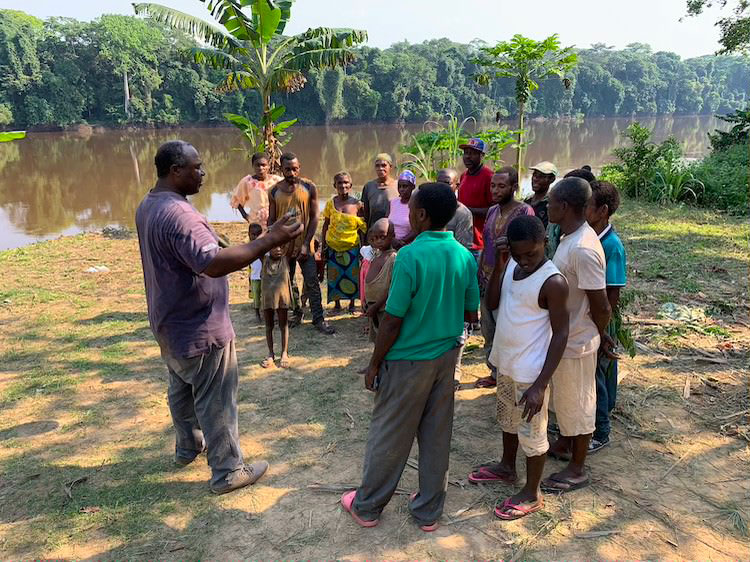 Missionary church-planter Leo, sharing the gospel with some of the citizens of Mpembe 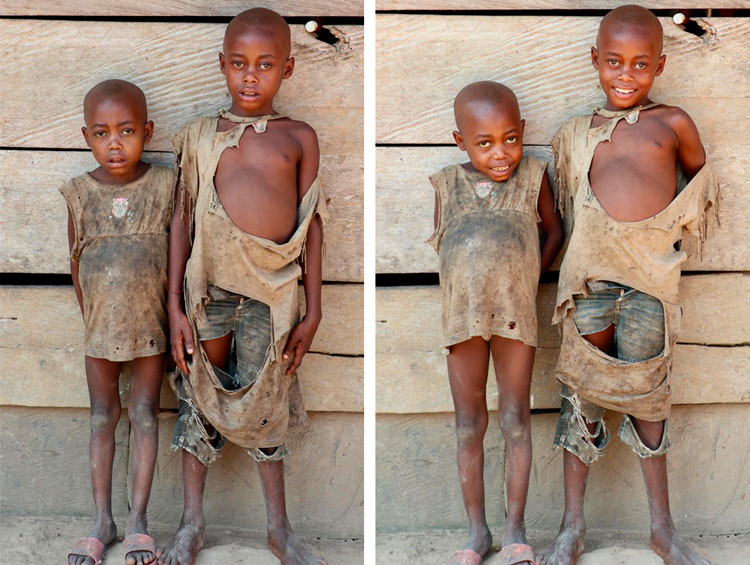 In the early years of Heaven’s Family, our policy was only to publish photos of people who were happy, the result of our serving them. But the nonprofit experts corrected us. People don’t feel sorry, or give to relieve the sufferings of, people who appear happy! So these days, we publish a mixture of photos, both sad and happy, although I would label the two photos above as “sad” and “happy/sad.” Which photo would be more likely to motivate you to write a check?