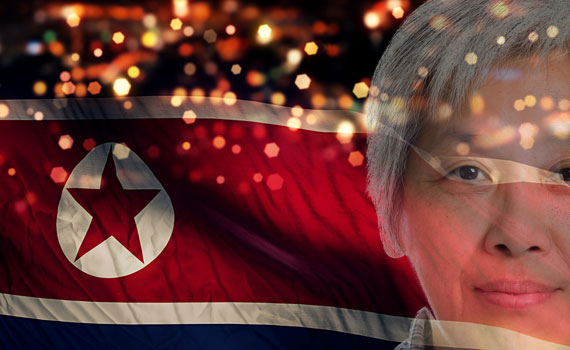 Mrs. Kim is called “Kingdom of Heaven Auntie” by those whom she serves

Living in silence. That’s what life is like in North Korea. As the rest of the world advances leaps and bounds in communication technology, that silence is becoming increasingly stark. It remains a bit of a mystery how this “Hermit Kingdom” can continue to severely limit the flow of information across its nonporous borders.

What little the citizens of North Korea do hear is full of government propaganda that tells them they’re blessed with “heavenly” living conditions—a thin, bald-faced lie that all can see through, but don’t dare discuss out loud for fear of imprisonment.

A hero named Mrs. Kim, a secret agent for the gospel, is helping to break that silence. Through her clandestine operations—actions that, if caught, would bring great suffering or even death upon herself—Heaven’s Family has learned much about the suffering of our brothers and sisters behind North Korea’s “closed doors.”

“The situation [for believers in North Korea] continues to be very difficult,” Mrs. Kim recently told us. She heard that “100 people have recently been arrested for anti-government charges,” which is usually the indictment given to Christians for worshiping God instead of the country’s despotic leader.

Thankfully, however, Heaven’s Family has the rare privilege of helping Mrs. Kim provide lifesaving food and spiritual support for a North Korean underground church network. Although food aid is vitally important for their malnourished bodies, her network of believers is just as hungry for the news Mrs. Kim brings from the outside world. Some have even begun calling her “Kingdom-of-Heaven Auntie,” because she offers them so much hope.

Recently a woman named Lilly asked Mrs. Kim if there really was a kingdom of heaven. She knew the government’s worn-out “Our country is paradise on earth” slogan was a lie. So Mrs. Kim told Lilly about Jesus’ kingdom—one that, though it didn’t always promise physical relief, did promise peace and joy in all circumstances.

Through your support of the North Korean Christians Ministry, Mrs. Kim has the resources to reach over 200 underground church families inside North Korea, including those who, like Lilly, are hungry for a better kingdom. Please continue to pray for her incredible mission and those she serves. May the true kingdom advance ever further!

Beaten by His Family
Against All He’d Learned