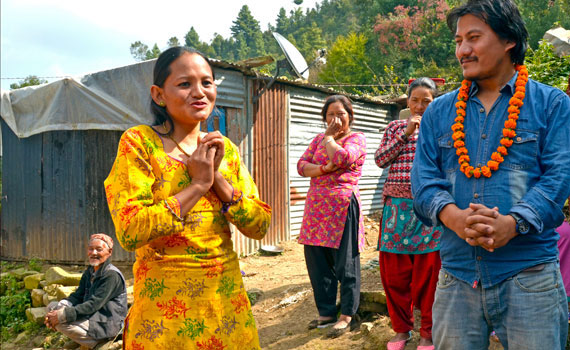 This woman, whose name is Maili Tamang, made a speech thanking Heaven’s Family for helping to rebuild her home. Afterwards she honored us with lunch in her humble yet sturdy new home made of metal sheeting over a bamboo frame, similar to the one behind her. She’s been married 11 years but has not yet been able to have children—please pray for her and her husband.

I’ve been on the ground here in Nepal for over a week now, and would like to report to you some of the ways you’ve helped earthquake victims.

Getting around Nepal has been difficult, as a new, man-made crisis has its grip on the landlocked nation a little smaller than the state of California. Due to a political rift with big-brother neighbor India, from which almost all their imports come, the border crossings have been closed. This has resulted in acute shortages of basic commodities such as gasoline for motorbikes and cars, diesel for trucks and buses, natural gas and vegetable oil for cooking, and many other products. People line up their vehicles and cooking gas bottles by the hundreds just to get a small ration of fuel. Gasoline now costs about $20 a gallon, when you can get it.

Thousands of motorbikes, trucks, buses, cars and even natural gas cooking bottles line street after street—often abandoned for days to hold their place in line as they await the appointed day to receive their ration—both in the capital city of Kathmandu as well as outlying areas of the country. These parked vehicles clogged many main thoroughfares, making travel difficult for other vehicles. Bicycles have become more popular!

I’ve been continually amazed at how the Nepali people have been dealing patiently with the new hardships. And our Heaven’s Family partners have continued to work hard serving earthquake victims despite the challenges.

Each day this week I’ve traveled to see the villages we’ve been helping since the April 25th earthquake. At first we provided emergency food such as rice, lentils and cooking oil, medicine, tarps, tents and safe water. Later we provided metal sheeting with which to rebuild their collapsed homes. And during this trip we supplied blankets and solar-powered lights for the cold winter season now beginning.

What a joy it has been to see the grateful smiles, warm “Jaimasih!” welcomes (pronounced jay-muh-SEE, it means Praise the Lord in Nepalese) and gracious meals of thanks. Each time they thank me for the help they’ve received, I’m quick to let them know that I’m only a messenger for the many followers of Jesus around the world who have given sacrificially on their behalf. If that was you, I pass on their heart-felt gratitude!

Below are photos of just a few…

I’ve also had several of what I call “God connections”—those special meetings with new people that seem to have been divinely orchestrated for eternal purposes. Together we’ve been talking about ways to help Nepalis recover economically, a critically important, long-term strategy to help those impacted by natural disasters. I’m excited about what God is doing here, and the opportunities that lie ahead. I’ll keep you posted as they develop. If you’d like to help with the ongoing recovery in Nepal click here.

My wife Karin is also with me on this trip, and together we direct the Human Trafficking & Slavery Ministry. The earthquake has unfortunately provided many new opportunities for traffickers to profit from displaced and further impoverished villagers who feel they have no option but to sell their young girls in a desperate attempt to ensure the survival of the rest of the family. Please pray for our efforts to help lift these families economically so that they do not feel forced to make this terrible choice.

Tomorrow I’ll tell you about a blanket distribution we did in a remote mountain city where 1 in 5 of its citizens perished in the earthquake. 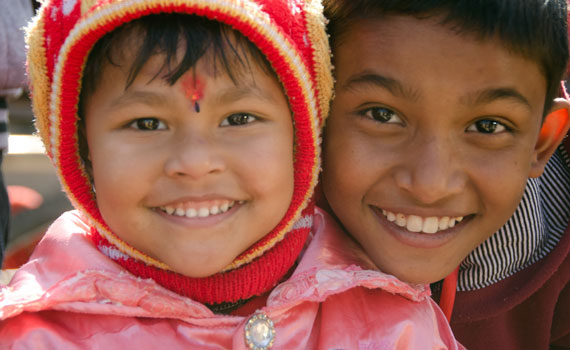 These two little “hams” happily posed for my camera in a busy market. The girl has a special Hindu marking on her forehead to somehow commemorate a festival that took place this week. The majority of Nepalese are either Hindu or Buddhist, but Christians are a growing minority.

Not Forgetting Nepal
Wrapped in Love