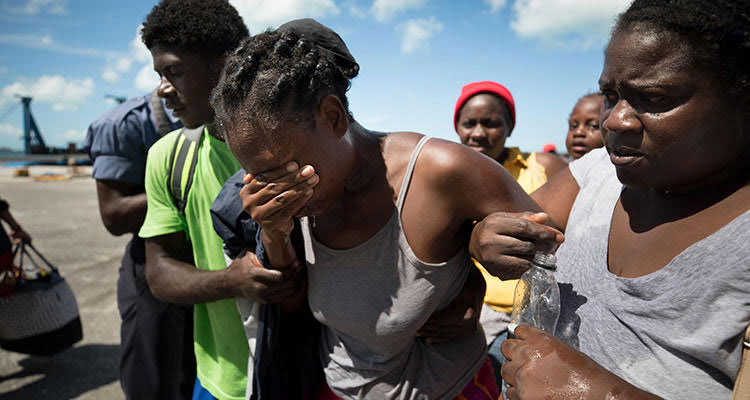 Many undocumented Haitians living in Abaco perished during Hurricane Dorian’s onslaught, but their bodies have not yet been added to the official death toll because their bodies cannot be identified (photo source unknown)

I tried to imagine what it would be like to endure a Category 5 hurricane generating 185 mph sustained winds, dumping 3 feet of rain, and pushing a wall of seawater over 20 feet tall across the island, submerging all but a few small areas of high ground, incessantly pounding everything in its path to shreds—and even moving large cement block homes hundreds of feet off their foundations. Most trees were uprooted or snapped off; those that remained were barren, leafless skeletons.

Cheri was there, she tried to tell me what it was like. “I just started praying, ‘Jesus help us!’ Then I felt the Holy Spirit tell me to anoint my two sons and the door and window frames of my house, claiming the blood of Jesus.” That was when the water had reached her knees. Soon it was waist-high, and she knew it was time to abandon her house for another nearby that was about 5 feet higher. Soon it was waist-high there, too, and she and her boys fled to the highest home in the neighborhood, which was about 15 feet above sea level. There was nowhere else to go. “We survived by the grace of God,” Cheri confidently blurted out, “nothing more, nothing less.” She praises God, however, for sparing their lives. “God is in control,” she affirmed with a conviction that I know rubbed off on me, and I felt certain on others who listened, too.

Arriving about 2 weeks later, water having receded and dried up, I witnessed what only could be described as apocalyptic. It looked like a giant stiff brush scrubbed back and forth across the island. The photos below show one of the areas impacted most called “The Mud” in the heart of Marsh Harbor, a town centrally located on the long, thin island of Abaco. (It was hardest hit because it was a poorly-constructed shanty slum, but also because those who lived there were among the poorest on the island and they literally lost everything but the clothes they wore.)

Above, I grabbed these two photos of before and a day or two after the historic storm from the internet for reference

The streets were mostly cleared by the time of my visit, making it much easier to survey the affected area (the blue-green house near the top, one of few that still stood, probably because it sat above where the full force of the tidal surge could reach, was one of the places where survivors found refuge)

At left, Cheri and her two boys; at right, Cheri seeing what was left of her home for the first time since Dorian hit

I couldn’t remain on Abaco…I had to catch the afternoon flight back to Nassau, where I stayed in the home of our partner. There was no running water, no electricity, no shops, no hotels, no nothing in Marsh Harbor, unless I had a tent and brought in all I’d need to live on. But there was no reason to stay anyway, because almost no one could be found there except some workers who started clearing streets and, of course, opportunistic looters.

Back on Nassau, I had already visited shelters where evacuees had fled—either before or after the storm. No one expects Marsh Harbor to be back up and running for at least 6 months, and some say more like a year, so the future of these refugees is uncertain.

To make matters worse, some are illegal Haitian residents. They never acquired legal status, so they’re fearful the Bahamian government will deport them—eventually. For now, officials have promised there will be none of that. But the shadow still hangs over them, so many have sought shelter in the private homes of compassionate citizens, many of Haitian descent. 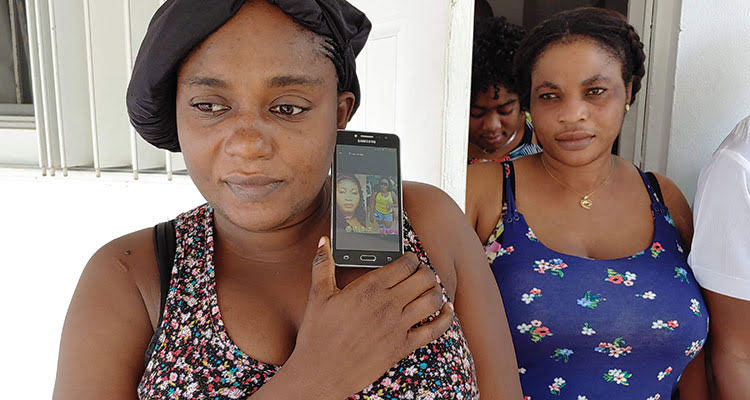 This woman, who evacuated before the hurricane hit, showed me several photos on her cell phone of people from their community who died or who are still unaccounted for

I learned during my visit that large NGOs, working through government emergency services, were well-supplying the masses in shelters with food, water, bedding and other necessities. So my partner and I started making calls to pastors and social services contacts who knew of groups of survivors staying in homes. We made an initial list and began purchasing supplies we could deliver to them. We also made plans for helping many others once I’d gone. Below are photos of a few we met.

These are two of the stops we made last Thursday to bring supples to small groups holding up in homes. Many were wary of our presence, wanting help but fearful we were going to report them to immigration for deportation back to Haiti. Not all residents were present at the time, especially those in the photo at right (that home had Haitian men who were legally registered with the Bahamian government and were out looking for work when we arrived with our supplies, and the 3 cute children I’d met 2 days prior were all taking their naps—very disappointing to someone like me who loves taking photos of kids!).

In the days ahead I’ll be working with my partner to continue identifying pockets of victims who are not receiving any other aid, helping them get through the next few weeks until they can find more permanent places to live, and encouraging them with the reminder that there are people—like you—who care about them because of their love for Jesus.

Thank you so much for your compassion for survivors of Hurricane Dorian. None of this response could have happened without you!

Serving together with you,