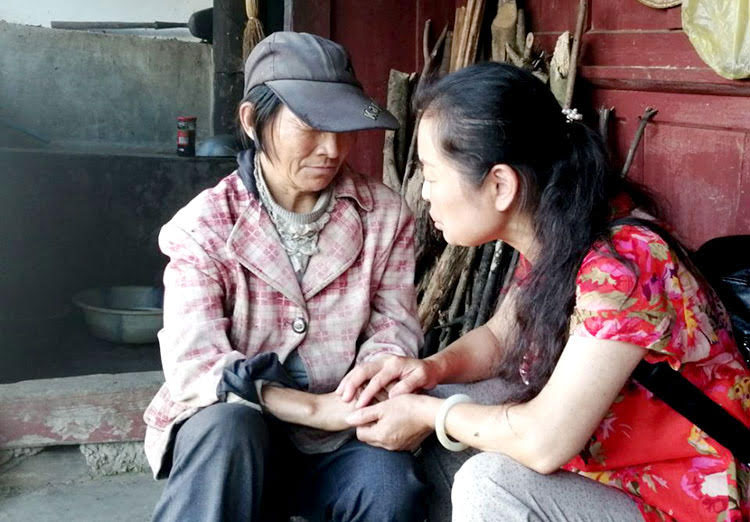 A life trapped in darkness for nearly five decades finally finds freedom in Christ, thanks to your partnership!

How one lady heard about Jesus for the first time

High in the mountains of China, among the A-Che people, there lives a 60-year-old lady named Wang Chung Lam. When she was 25 years old, she married into a family from a far-off village. Ten years later, her husband died. Her family became increasingly poor. She married another man who became part of her family (as opposed to her moving to his hometown). They were unable to have children.

When Wang was 45, her only son (from her first marriage) married into another village, leaving her and her second husband alone in a village where neither one of them had grown up. The native villagers treated them as outsiders, looking down on them and treating them very poorly. Wang and her husband, both illiterate, felt wronged and upset. They lost their sense of meaning in life, feeling that there was no way out.

As an escape, Wang turned to smoking and drinking, saying that it made her feel more comfortable. She worshiped Buddha and her ancestors in search of help but said it was no use—their lives just got poorer and poorer.

But when evangelists from the Heaven’s Family Unreached People Groups Ministry came to her village, Wang Chung Lam heard the gospel. The visitors explained the death and resurrection of Jesus and invited her to place her heavy burdens on Him. Upon hearing of this heavenly hope, she believed immediately. Finally she had found the most reliable one, Jesus. She finally felt somebody cared for her and loved her. Her heart was joyful and her life had hope again!

Wang also confessed her sin and committed to stop smoking and drinking. Pray for her to walk out her repentance faithfully. We are committed to discipling her in the faith.

Heaven’s Family’s Unreached People Groups Ministry is working to reach the A-Che people and others in some of the world’s most challenging places. Please pray for God’s Spirit to draw more people to Himself and to use our outreach to bear fruit for His glory.

Your contributions make it possible for us to preach the gospel to the unreached, to make disciples, and to raise up faithful leaders in their midst.

Eternally grateful for your partnership,

Who is the Man in White?
Legacy Impact