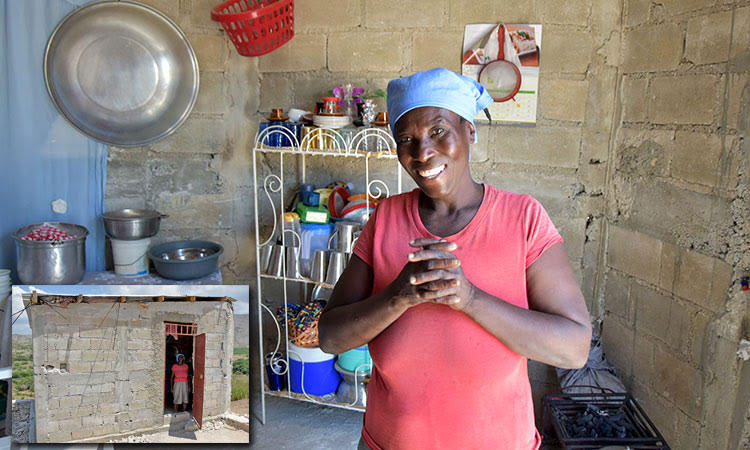 A widow named Margaret, whose one-room block home (inset) she shares with her three children, is very grateful to now have a roof over her head, thanks to Heaven’s Family (click here to watch a 12-second message of thanks from Margaret)

Every leaf from every tree and shrub was stripped away—it looked like the work of a massive fire or bomb. Each day during my visit this month I’m hearing similar chilling descriptions from those who survived the 145-mph onslaught of Hurricane Matthew last fall in Haiti. Corrugated metal sheeting, flimsily tacked on poor, shack-like homes for roofing and sometimes walls, became razor-sharp projectiles that wounded and maimed those who couldn’t find adequate shelter in time. About 1,000 died, estimates say, but no one knows how many were wounded.

The southwestern tip of Haiti, which faced the brunt of the category-4 storm last October, has returned to being a tropical paradise, but the land is still horribly scarred. I’m visiting three of the hardest hit communities this week—Jeremie and Bon Bon on the northern coast of the peninsula, and Port Salut (sah-loo) on the southern coast—as I assess the work that Heaven’s Family accomplished through the Disaster Relief Ministry in the first weeks following the disaster, and make plans with our partners to help victims recover. We also want to help the poorest—virtually everyone here is poor, but there are various levels of it—who live in the hundreds of homes that still only have tarps for roofing…tarps that are wearing out quickly under the intense tropical sun. 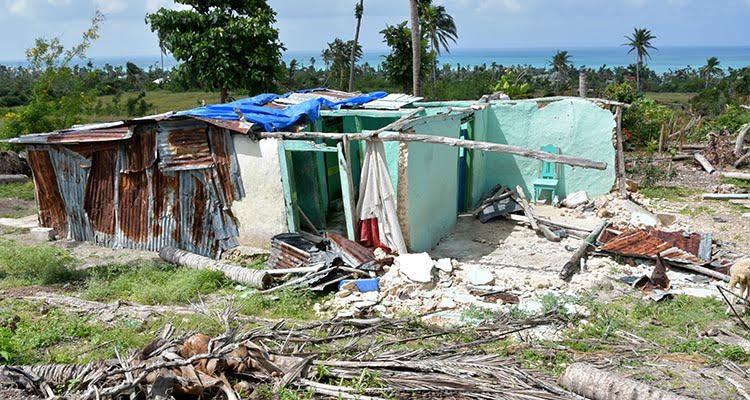 Many homes like this one still lie ruined by the hurricane, but residents have scavenged whatever old metal sheeting, tarps and other materials they could find scattered across the countryside to make one or two rooms habitable—at least for now 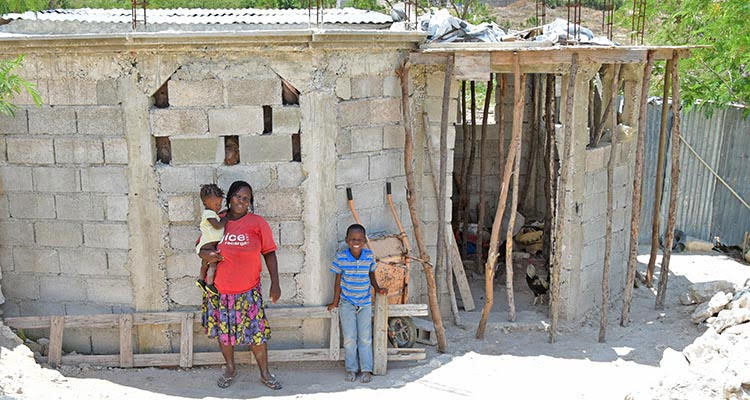 Another widow, named Mora, pictured here with her two children, received metal sheeting for her roof and toilet area (at right); after talking with our partner about her limited options for earning an income to help support her family, I decided to leave her with $100 so she can start her own cooking-charcoal distribution business, which she can operate from her home and sell to others in her neighborhood (everyone must currently go to a market a couple miles away, so we’re hoping she’ll have a competitive advantage)

Remy (in the doorway and at right), standing in the place he calls home. Heaven’s Family provided metal sheets for his roof, but it felt like an oven inside because it has no windows. Remy, who is disabled due to age and some sort of intestinal problem, lives here with his wife, who was away at a market trying to sell a few meager items in hopes of having enough food to prepare a meal for the two of them tonight.

I’ve been to Haiti many times since the earthquake in 2010, but never before have I felt the degree of optimism I now feel about this nation, which is ranked the poorest country in the Western Hemisphere. That’s because of a new Disaster Relief Ministry partner called Haiti One that is helping change the way Christian humanitarian groups do ministry here. Rather than each group focusing only on their own work as in times past, Haiti One seeks to coordinate efforts and pool resources from every organization working in Haiti to maximize impact and train up local leadership.

Many have asked me over the years if I thought all the money that’s been poured into Haiti for decades has resulted in any real change. After telling them about Heaven’s Family’s encouraging, measurable results in our own little “corner of Haiti,” I’ve always confessed, sadly, “Not much.” But I’m now seeing a glimmer of hope for Haiti as a nation, and I’m glad our efforts are now being multiplied through Haiti One.

That’s a story I am thankful to be able to now tell, and I’m so thankful for each of you who, through your compassionate giving and love for Jesus, have traversed Haiti with me these last few days. It’s on to Cuba next, the second stop on Hurricane Matthew’s terrible tour—as well as my encouraging one—and I hope you’ll stay tuned for my trip blog from that communist island nation just a hundred or so miles to the northwest.

These women were having a Bible study in one of the homes we provided a roof for in Port Salut (see roof in photo at right). I wondered if group membership required the wearing of a straw hat, but the woman at left, who seemed to be the group’s leader, looked a bit too serious to ask!

The little boy at left wants there to be no questions about who is in charge (although not everyone in the group seems happy about that!); at right, the delightfully expressive face of a woman in the neighborhood