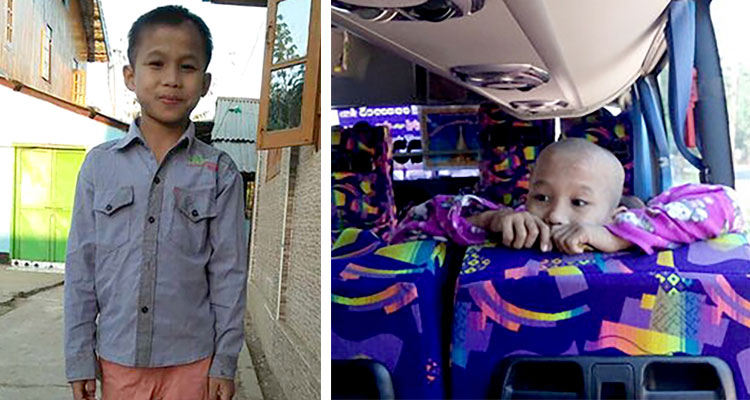 At left: San living at the orphanage in Myanmar. At right: San on the bus, going to see his family.

You rescued this vulnerable boy from bullies

San’s ear smelled like a dead fish. At the orphanage where he lived, a bully had shot him in the ear with a BB gun. The plastic bullet became lodged inside his ear canal. As a result, San couldn’t hear very well, but he was afraid to tell anyone.

San’s ear soon became infected. The orphanage staff finally noticed and took him to the hospital for treatment. Although his ear recovered fully, that didn’t fix his problem with the bullies.

Around this time, our local partner in Myanmar held a seminar in a village about how children belong in families. (A seminar funded by your gifts to Heaven’s Family’s Orphan’s Tear Ministry.) Two of the people attending were San’s parents! They had sent San to an orphanage so that he could receive a better education outside their village. But upon hearing how important parents are for a child’s growth, they regretted having sent him away. Now they wanted him back.

You helped reunite San with his family by providing a social worker to oversee and coordinate the reunification. She ensured that San’s family was safe and able to care and provide for him.

When the social worker came for her follow-up visit, San looked nervous. He said he was much happier living with his family, no one bullied him, and he didn’t want to leave home. The social worker finally figured out the reason for San’s anxiety—he thought she was coming to take him back to the orphanage!

Thank you so much for giving San his family back and the protection he needed.

Hope on the Streets