A young disabled boy, Richard, on the streets the day Victoria Namusisi found him

Moving into eastern Uganda, I met up with Victoria Namusisi—a remarkable woman by any standards. For much of her life, Victoria served as a government official in charge of purchasing and acquisitions. But she became disenchanted with the corruption and walked away from a comfortable salary and prestigious position in order to help those less fortunate.

Victoria has raised her children as a single mother, due to her husband’s chronic alcoholism. She also became “Mummy” to several hundred abandoned street children from the cities of Kampala and Entebbe. Victoria’s home was quickly outgrown and dormitories were constructed for the children, whom she continues to feed, clothe, and mentor. This may appear to be a rather daunting task for such a woman, but she does even more!

This amazing woman is also the director of Noah’s Ark, a school for disabled children, which she envisioned and started a few years ago. At Noah’s Ark, up to 25 children with special needs receive care, education and therapy for a multitude of physical and mental disabilities. Heaven’s Family has supported Noah’s Ark with tuition assistance, salary for a physical therapist, and the purchase of specialized equipment.

Going even one step further, Victoria saw a crucial need for a very marginalized group in Ugandan society—acid attack survivors. These men and women live with severe scarring and horrific disfigurement as a result of the heinous crime of “acid splashing.” Victoria’s heart went out to these victims, and so she started a support group called “Blessed Survivors”—one of whom I was going to have the pleasure of meeting.

Today I travel west to the Ugandan border and enter the bustling town of Busia. We walk down an alley and enter through a rusted steel door hanging on by a single hinge. We pass through a narrow walkway and, entering a small courtyard at the far end, come to a humble residence.

Kenneth and his sister were orphaned at a young age. After graduating, Kenneth began working for his friend and mentor. One afternoon he and his boss were standing on a corner in Busia when they were violently splashed with acid by a perpetrator who is believed to have been an individual with a large debt to Kenneth’s boss. Kenneth survived, but his boss, unfortunately, died 2 days later.

In order to care for Kenneth, his sister was forced to leave her job and travel to Kampala where the Disabilities Ministry financially supported Kenneth’s emergency care, skin grafting, and follow-up consultations. Now, along with his sister and her young daughter, Kenneth lives in a single room at the end of this tiny courtyard. They have no income and their rent is 2 months behind—and the electricity has been shut off. Fortunately, due to divine appointment, Kenneth was introduced to Blessed Survivors.

We are now in the process of getting Kenneth’s rent caught up, power turned back on, much-needed medicine purchased, and a small means of subsistence for the tiny family to survive on. As I sit on Kenneth’s bed, holding his hand, we talk about the gospel and I ask him “Are you able to forgive the people who did this to you?” Without a tear in his eyes, he quietly states “Yes, we must forgive.” I’m speechless, as I marvel at the incredible strength and love in this young man’s being.

Victoria (at left) with Kenneth, now hopeful of a bright future through the forgiveness of his assailant

Like so many of the children Victoria cares for, Kenneth’s life took a tragic turn, his faith tested in what I would call an unimaginable fashion. But I see hope against hope in their eyes, smiles on their lips, and young lives just wanting so badly to be loved and accepted as human beings created in the likeness and image of Jesus Christ. I believe we all are precious in His sight, regardless of where we are or what we look like.

Thank you for joining me on this journey. Stay tuned for my 3rd and final blog. 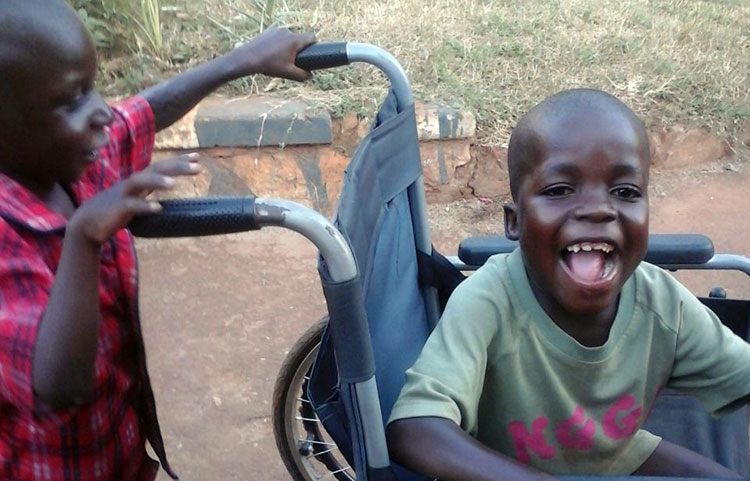 Processional for a Princess
“It has to be in your heart”