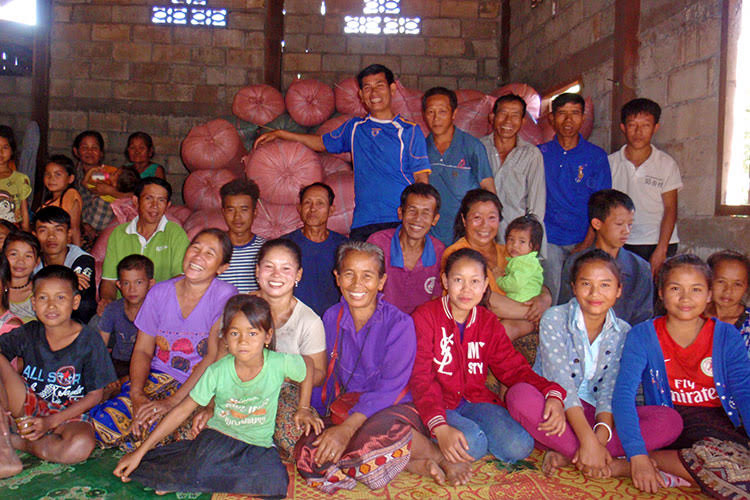 Our grateful brothers and sisters from Nakhaeng Village

A “mini-disaster” swings open great doors of opportunity in Laos, Part One

I came home on December 28th to find it raining inside my house—a water pipe running through the attic had frozen and burst after many days of frigid temps in Pennsylvania. Suddenly I had my own disaster to deal with. We had no kitchen for over 2-1/2 months. I thank God our insurance company paid for all the necessary restoration work, which finally came to an end last week.

Much of the world doesn’t have insurance, either because it doesn’t exist in that country or because it’s much too expensive for folks who just hope to have enough food for their family that day. They depend on the Lord and compassion of others when disaster strikes, even relatively small ones.

We never hear about such “mini” natural disasters. They never make the news. That’s not important enough, comes the editorial decision. But when the disaster affects you and your family, like a broken water pipe did mine, it’s very important.

I’m thankful for good friends like Keo, a Heaven’s Family partner I’ve known since 2011, who lives in the communist country of Laos. Last fall he told me about a freak storm that in one night washed away one small village’s entire year’s worth of rice, the staple part of their diet. I never would have known about the dilemma faced by these brothers and sisters in Christ had it not been for Keo—nor would you. And I’m thankful to those of you who’ve partnered with the Disaster Relief Ministry, because you enabled us to purchase rice to sustain these desperate believers for three months. Below are photos of joyful men from Nakhaeng Village carrying bags of rice into their storehouse.

When I visited Keo and the affected village in January, I met some very grateful fellow saints. They will still face food issues later this year, but we got them past the most difficult months.

Village elders stand in one of the rice fields that flooded when a freak, post-rainy-season storm struck one night, flooding the river (seen about 15 feet below the field at far right), washing away stacks of freshly-harvested rice, taking down trees like this one and depositing up to a foot of sand in many parts of the field, making future growing impossible in those areas until it’s cleared

In my conversations with Keo while riding in the truck to visit Nakhaeng Village, I learned that he thought Heaven’s Family only helps believers. Yes, I said, members of our spiritual family are our first priority, but we also ask God to show us opportunities to help unbelievers as a witness to them of God’s love—especially during times of distress when their hearts are more open to the gospel. Keo told me next about two other nearby villages affected similarly by the river’s flooding, but added that no Christians live in either one. AHA, I thought, God’s going to do something great, I can feel it in my spirit!

But to discover the incredible God-events that took place next, you’ll have to wait for Part Two of my report!

Serving Jesus and you,

Getting to Nakhaeng village means crossing the Mekong River by ferry in the morning, crossing small rivers along a rocky, rutted dirt road (this crossing is also used as the local car/truck wash—no lasers used here, nor spot-free rinses!), and walking a path through the rice fields, which are used as pastures in the off-season months.

Some of the beautiful children of Nakhaeng Village 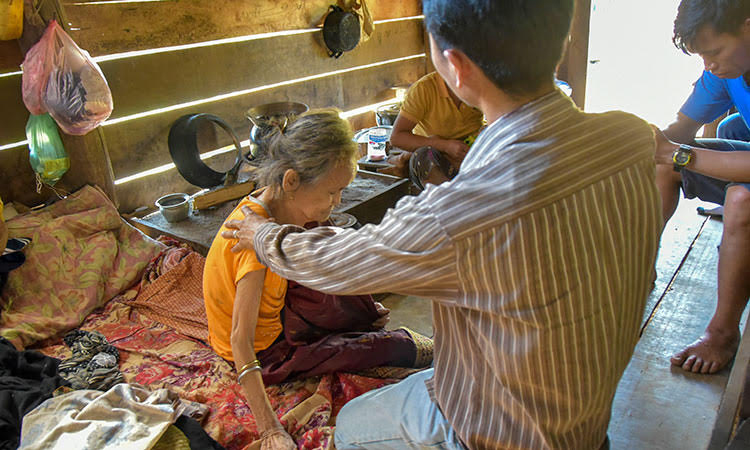 Keo praying for healing for this elderly woman in Nakhaeng Village. I was told she had recently turned to the Lord from witchcraft.

Hitting Back at Harvey
A Win-Win-Win for the Gospel