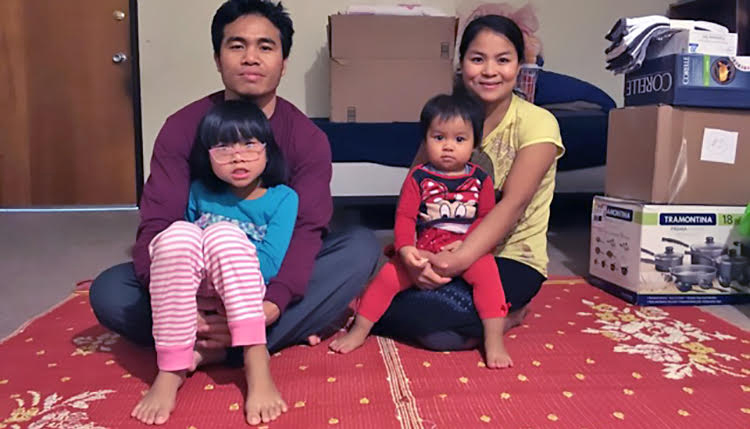 The grateful Mami family, pictured with the beautiful gifts that they received

When I accepted used furniture from a friend of mine last year, I had absolutely no idea just how significant a simple dresser was to become. My daughter-in-law Daisy was born and raised in Myanmar and, since she has moved to the United States, our family’s eyes have been opened to the plight of so many refugees who have fled Myanmar due to what is considered by experts as one of the largest refugee crises in modern history.

Over the past several decades men, women and children have been violently forced from their homes as whole villages are razed to the ground by ruthless militant groups. The United Nations sanctioned Myanmar but to no avail. Corrupt leaders continue to live in luxury while their fellow countrymen live in abject poverty. But many of Myanmar’s citizens have fled the country altogether, often relocating to the neighboring country of Malaysia.

Pittsburgh, Pennsylvania has also become home to a small population of Myanmar refugees. And coincidentally, that is my home as well.

So when I received that dresser from my friend, I wasn’t surprised to hear from Daisy shortly after. She knew of a refugee family that had only been in the U.S. for 10 months, and who barely had the basic living essentials—let alone a dresser to put their clothing in. I soon realized that this family (having come from such a warm climate) was incredibly unprepared for the cold Pennsylvania winter that lay ahead. But I also learned of another refugee family who, living in the apartment below, had only been in the U.S. for 2 months! I visited them as well and, upon introducing myself, was shocked to discover that this family was just as unprepared for winter as the first family and in dire need of items such as coats, shoes and bedding.

I knew the Lord wanted me to meet these needs, but I also knew it was going to require so much more than just my desire to help. Unsure of the response, I took a step of faith and made a short post on Facebook. Soon, emails began flooding in from people who wanted to help, and I was both amazed and delighted!

Because of the outpouring of donations—from those both in Pittsburgh and elsewhere—15 families were blessed with kitchen utensils, eating ware, bath and bedroom linens, and gift cards to their local grocery stores…and even Christmas stockings and gifts for their children!

One particularly grateful woman sent us a heartfelt note:

Another woman sat on the floor with tears in her eyes as I prayed with her, touched by the knowledge that there is a community of people who care for her and her family in their need. But all of this wouldn’t have been possible without the love and compassion of the body of Christ. I didn’t know when I posted the need on Facebook that so many people would respond. What started out with 8 families ended up growing to 15! I was ready to stop at 8, but God knew there were others He wanted us to help. The last family I visited was the neediest of them all, and I am so glad I didn’t stop at what my earthly eyes could see. What an amazing God we serve!

At left, a refugee family that was blessed with supplies and gifts for their children; At right, Becky praying with a mother and her children.

I am personally so thankful to every one of you who responded to the many needs of these refugee families from Myanmar, sharing the love of Jesus with them. Truly, you were His hands and feet as you met their physical needs of ‘bed’ and ‘bath’, but even more importantly you provided them with BLESSINGS BEYOND the physical realm—by sharing Jesus’ love with needy hearts. Thank you so much!